The Magnificent Yongle Big Bell of the Ming Dynasty 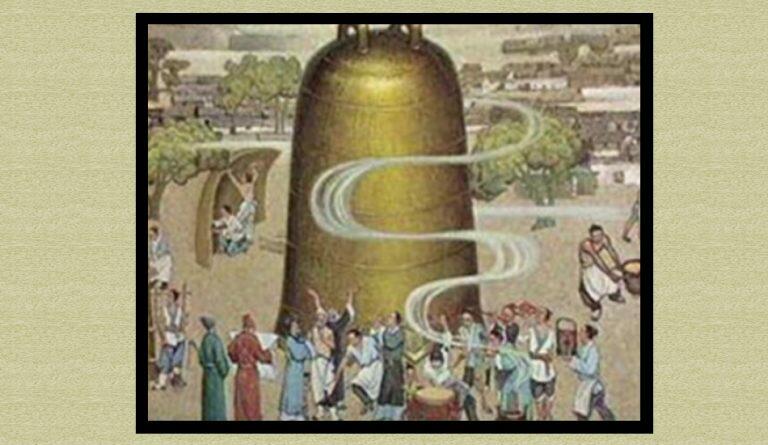 The Yongle Bell is a magnificent piece of work, exhibiting superb craftsmanship that is difficult to achieve even with today’s advanced science. (Image: Mikel Davis via Nspirement)

Known as “the best bell in the world,” the Yongle Big Bell was cast during the Ming Dynasty’s prosperous Yongle period (approximately 1420-1424) under the order of Emperor Chengzu. The Yongle Bell is a magnificent piece of work, exhibiting superb craftsmanship that is difficult to achieve even with today’s advanced science. The bell has been struck for more than 500 years, and it remains as smooth and flawless as the day it was created.

The history of the ‘King of Bells’

Since ancient times, bells have been considered important musical instruments in Chinese Buddhist rituals. The well-known temples throughout China all have a bell tower that adds beauty and a sense of majesty to the temple, while the clanging of these bells has marked the start of important events or ceremonies. In the “Records of Taizu” (Taizu Emperor of the Ming Dynasty), it was recorded that “whoever contributed the most, the bell would ring loudest for.”

The unparalleled Yongle Big Bell, as it’s come to be known, was born during the flourishing age of the Yongle reign of the Ming Dynasty. It is the largest bell in all of China, and enjoys the title of the “ancient King of Bells.” The bell’s dignified image and splendid inscriptions symbolize the history and longevity of the world, the peace of China and its people, and the state of harmony and happiness.

The beautifully shaped Yongle Big Bell is made of copper, tin, and lead alloys, and its golden body remains bright and shining to this day. From metallurgical analysis, the formula used for casting the bell followed the highest scientific principles to create a bell of unrivaled strength and endurance. Weighing in at 46.5 tons, the bell measures just under 23 feet high, with a diameter of just under 11 feet. The thickness of the bell’s wall varies from 3.7 inches at the waist, to 7.3 inches at the lip, the thickest part of the bell.

Both the inside and outside of the Big Bell’s body are inscribed with Buddhist sutras, with a total of more than 227,000 characters in all. The outside of the bell includes the “Amitabha Sutra,” the inside of the bell contains the “Lotus Sutra of Wonderful Dharma,” and the lip of the bell is inscribed with the “Vajra Prajna Sutra.” The bell includes 17 types of mantras in precise, original Han Chinese characters, evenly distributed throughout the body of the bell. According to legend, the handwriting is said to be that of the early Ming Dynasty calligrapher Shen Du.

The Big Bell has some unique features and characteristics worth pointing out.

The bell’s first feature is that it is not only very large and heavy, but the bell is quite ancient, having endured for centuries.

The second feature is that it is the largest bell with the most inscriptions in the world. It’s said that the reason the scriptures were written on the Big Bell was because “one hit of the bell reaches all the sutras,” meaning that the sound of the bell is used to convey the Buddha’s compassion.

The third feature of the bell is its unique and glorious sound. The shape of the bell, being narrow at the upper part and wide at the lower part, creates a strong and loud undulating sound wave, with a rhythm that is bright and elegant. When the bell is struck, the sound is carried for approximately 25 to 30 miles around, and the sound can linger for more than two minutes. The ancients believed that the tone of the bell resonating with the body had the ability to heal illness.

The fourth unique feature is the scientific and mechanical structure of the bell. The Big Bell is suspended from the main beam and relies entirely on a copper piercing nail to hold it in place. Although the piercing nail bears more than 40 tons of weight, it remains strong and intact.

The fifth feature of the bell is its superb casting process. According to an analysis by current researchers, the strength of the bell reached its best value, meaning it is so strong that it could not be improved upon. This is what has allowed the bell to be struck for more than 500 years, and yet remain fully intact.

The Yongle Big Bell brings fame to its temple

The Yongle Big Bell was housed at several locations before reaching its final destination.

Upon the bell’s completion, it was first sent to Hanjing Factory (now called Songzhu Temple) in Jingshan Back Street, where the monks chanted and struck the bell daily. In the thirty-fifth year of the Wanli Emperor (1607), the Big Bell was moved to Wanshou Temple outside of Xizhimen, where it is said that six monks struck the bell every day. Moving the Big Bell to Wanshou Temple caused quite a sensation at the time, and many people came out to watch the grand scene in the capital city.

In the eleventh year of Yongzheng Emperor of the Qing Dynasty (1733), the Big Bell was moved to Juesheng Temple, where a two-story bell tower was specially constructed for it. The tower was circular at the top and square beneath, in accordance with the Chinese saying “heaven is spherical and the earth is square.”

It was not until the eighth year of the Qianlong Emperor in 1743 that the bell tower at Juesheng Temple was finally completed. Now known as the Big Bell Temple or Da Zhong Temple, it has been made famous thanks to the beautiful bell it contains within.

Big Bell Temple was constructed in the royal style of ancient Chinese traditional architecture, with a bluestone plaque hung at the gate entrance of the mountain. The plaque is engraved with nine flying dragons penetrating the sky, and in the center is the imperial writing of Emperor Youngzheng, which reads: “Juesheng Temple.” At that time, the Emperor would go to the temple when he needed to pray for rain, and over the years, the temple became a place to pray for rain.

Today, the Big Bell Temple is not only a place for Buddhists, it’s also one of the eight traditional temples to hold temple fairs in Beijing.

During the Ming and Qing dynasties, monks in the Big Bell Temple would ring the bell 108 times every time they “sent out the old and welcomed the new.” According to the earliest Chinese calendar, there are said to be 12 months, 24 solar terms, and 72 phenotypes in a year. On each of these occasions, the Chinese would ring the most cherished of all bells, the Yongle Big Bell. The sound of the Big Bell would ring out crisp and clear, with a heavy and loud sound, reverberating the beauty and magic of the grand bell for miles around.

The Yongle Big Bell is well-known not only at home, but also abroad, for its long history, beautiful sound, exquisite casting, and craftsmanship, as well as its splendid calligraphy art and Buddhist scriptures.

The bell’s magnificent tone and regal beauty stir something deep in the soul, hearkening back to a time of ancient wisdom and mystery. Perhaps this is why the Yongle Big Bell remains one of the most beloved marvels in the world today.