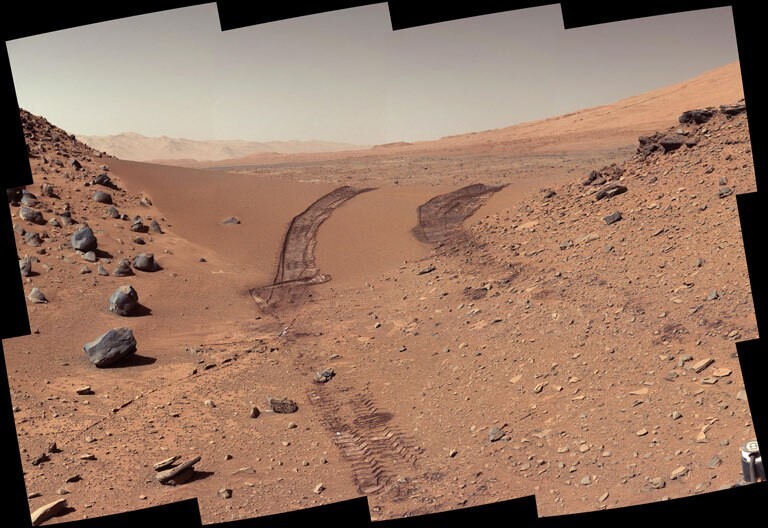 The Red Planet as photographed by the Martian rover Curiosity. (Image: JPL-CALTECH/MSSS via NASA)

A combination of a once-debunked 19th-century identification of a water-carrying iron mineral and the fact that these rocks are extremely common on Earth, suggests the existence of substantial water hidden on Mars, according to a team of geoscientists. Peter J. Heaney, professor of geosciences, said:

“One of my student’s experiments was to crystalize hematite. She came up with an iron-poor compound, so I went to Google Scholar and found two papers from the 1840s where German mineralogists, using wet chemistry, proposed iron-poor versions of hematite that contained water.”

In 1844, Rudolf Hermann named his mineral turgite, and in 1847, August Breithaupt named his hydrohematite. According to Heaney, in 1920, other mineralogists, using the then newly developed X-ray diffraction technique, declared these two papers incorrect. But the nascent technique was too primitive to see the difference between hematite and hydrohematite.

Si Athena Chen, Heaney’s doctoral student in geosciences, began by acquiring a variety of old samples of what had been labeled as containing water. Heaney and Chen obtained a small piece of Breithaupt’s original sample, a sample labeled as turgite from the Smithsonian Institution, and, surprisingly, five samples that were in Penn State’s own Frederick Augustus Genth collection.

After multiple examinations using a variety of instruments, including infrared spectroscopy and synchrotron X-ray diffraction, a more sensitive, refined method than used in the mid-19th century, Chen showed that these minerals were indeed light on iron and had hydroxyl — a hydrogen and oxygen group — substituted for some of the iron atoms. The hydroxyl in the mineral is stored water.

The researchers recently proposed in the journal Geology “that hydrohematite is common in low-temperature occurrences of iron oxide on Earth, and by extension, it may inventory large quantities of water in apparently arid planetary environments, such as the surface of Mars.” Chen said:

“I was trying to see what were the natural conditions to form iron oxides. What were the necessary temperatures and pH to crystallize these hydrous phases and could I figure out a way to synthesize them.”

She found that at temperatures lower than 300°F, in a watery, alkaline environment, the hydrohematite can precipitate out, forming sedimentary layers. Heaney said:

“Much of Mars’ surface apparently originated when the surface was wetter and iron oxides precipitated from that water. But the existence of hydrohematite on Mars is still speculative.”

If hematite found on Mars is actually hydrohematite, there may be large amounts of water hidden on Mars

The “blueberries” found in 2004 by NASA’s Opportunity rover are hematite. Although the latest Mars rovers do have X-ray diffraction devices to identify hematite, they are not sophisticated enough to differentiate between hematite and hydrohematite. Heaney said:

Mars is called the red planet because of its color, which comes from iron compounds in the Martian dirt. According to the researchers, the presence of hydrohematite on Mars would provide additional evidence that Mars was once a watery planet, that there may be large reservoirs of water hidden on Mars, and water is the one compound necessary for all life forms on Earth.