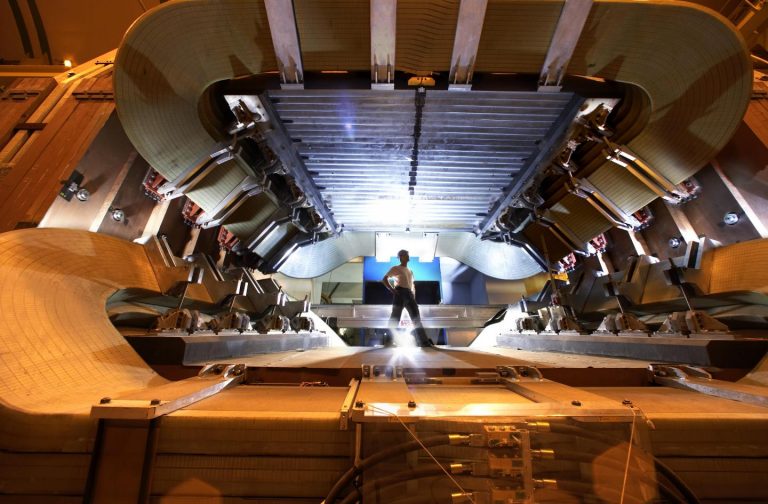 Discovery of a new exotic hadron containing two charm quarks and an up and a down antiquark. (Image: via CERN-Geneva)

The LHCb experiment at CERN has presented a new discovery at the European Physical Society Conference on High Energy Physics (EPS-HEP). The new particle discovered by LHCb, labeled as Tcc+, is a tetraquark — an exotic hadron containing two quarks and two antiquarks. It is the longest-lived exotic matter particle ever discovered, and the first to contain two heavy quarks and two light antiquarks.

Quarks are the fundamental building blocks from which matter is constructed. They combine to form hadrons, namely baryons, such as the proton and the neutron, which consist of three quarks, and mesons, which are formed as quark-antiquark pairs. In recent years, a number of so-called exotic hadrons — particles with four or five quarks, instead of the conventional two or three — have been found. Today’s discovery is of a particularly unique exotic hadron, an exotic exotic hadron if you like.

The exotic matter particle has other interesting features

The quark content of Tcc+ has other interesting features. It is the first particle to be found that belongs to a class of tetraquarks with two heavy quarks and two light antiquarks. Such particles decay by transforming into a pair of mesons, each formed by one of the heavy quarks and one of the light antiquarks. According to some theoretical predictions, the mass of tetraquarks of this type should be very close to the sum of the masses of the two mesons. Such proximity in mass makes the decay “difficult,” resulting in a longer lifetime of the particle, and indeed Tcc+ is the longest-lived exotic hadron found to date.

The discovery paves the way for a search for heavier particles of the same type, with one or two charm quarks replaced by bottom quarks. The particle with two bottom quarks is especially interesting. According to calculations, its mass should be smaller than the sum of the masses of any pair of B mesons. This would make the decay not only unlikely, but actually forbidden. The particle would not be able to decay via the strong interaction and would have to do so via the weak interaction instead, which would make its lifetime several orders of magnitude longer than any previously observed exotic hadron.

The new Tcc+ tetraquark is an enticing target for further study. The particles that it decays into are all comparatively easy to detect and, in combination with the small amount of the available energy in the decay, this leads to an excellent precision on its mass and allows the study of the quantum numbers of this fascinating particle. This, in turn, can provide a stringent test for existing theoretical models and could even potentially allow previously unreachable effects to be probed.

Provided by: CERN [Note: Materials may be edited for content and length.]