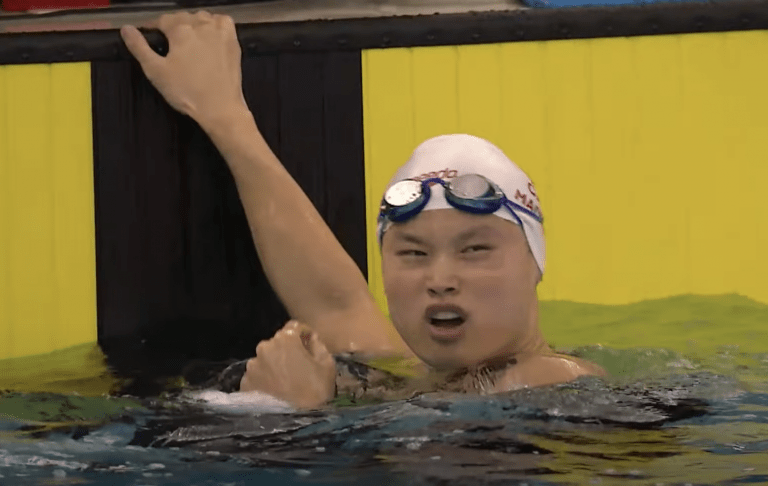 The moment Margarete Mac Neil took the gold at the 2020 Olympics in Tokyo, Japan. (Image: Screenshot via YouTube)

Chinese Canadian swimmer Maggie Mac Neil, a.k.a. Margaret, won the women’s 100m butterfly final on July 26, 2021, at the Olympic Games in Tokyo.  It was a triumphal moment for both the 21-year-old and her parents.

While it seems like a great victory for her as an individual and the collective nation of Canada, it is arguably also a great accomplishment considering her modest origins.

Maggie Mac Neil was abandoned as a baby in China

Hannah Margaret Mac Neil, or Maggie, was born on February 26, 2000, in Jiujiang, China. She was reportedly abandoned by her parents when she was just a few months old.

Her adoptive parents are Canadians Ed Mac Neil, a teacher, and Susan MacNair, a family doctor. They took Maggie in and loved and raised her as their own.

Maggie didn’t grow up alone. She wasn’t just fortunate to grow up in the warmth of her adoptive parents but in the company of an adoptive sister Clara Mac Neil.

Strong will and determination

If you think that being abandoned as a baby in China and being adopted by Canadian parents was a plot twist or a twist of fate, then imagine also struggling with training-induced asthma and still managing to become an Olympic medalist.

That is what happened to Maggie, who won gold in the 100m butterfly event at the Tokyo Olympics, the first gold medal for Canada.

“The air was so wet that I couldn’t breathe at the 2017 Singapore World Aquatics Championships… I came home … and ended up in the respiratory department and found out I had exercise-induced asthma, which would have been worse if I was exposed to chlorine,” she recalled.

The result of a strong work ethic

Her first medal at the Olympics was also the first medal for Canada, but judging her trainer Andrew Craven’s statement, her victory was more than just luck.

“The way she looked in the water, her work ethic, and her attention to detail, we knew we had something pretty special,” said Andrew Craven, head coach of the LAC in an interview with CTV News.

Maggie was fast to reach the top of her sport. Often regarded as a humble young girl, most of her followers and fans were stunned when she took gold in the women’s 100m butterfly.

She beat China’s favorite Zhang by just 0.05 seconds, beating her own personal best and setting an American continental record at her first Olympic Games of 55.59 seconds.

“We thought there was a chance for bronze, maybe a bronze, but we didn’t ever think of silver, so that was very exciting,” says Susan McNair, MacNeil’s mother, in a report on CTV News

In a media interview, Edward (Maggie’s dad) said that it was tough not being able to be there with his daughter to cheer her on as usual.

“We always are there with other parents but I think this silver medal will really give her some motivation”.

Watch the replay of the Women’s 100m Butterfly and Maggie’s win:

The recipe for success

Many people arguably believe you either have it or you don’t. You are either born a champion or not.

Others will disagree. In fact, in Maggie’s case, she contributes her success to the love and support she got from her parents.

She began swimming at the age of 2 years. It wasn’t until she competed in real competitions that she began to pursue bigger goals regarding swimming.

“I began to dream of participating in the Olympics,” Maggie said.

The Chinese Canadian star swimmer has been competing in competitions since the age of 12.

For many years, her dad would wake up at 5 in the morning, Maggie recalled in an interview. He would wait for the swimming pool to open in front of the stadium in London, Ontario, after drinking a cup of coffee at Tim Hortons.

In a world clouded by a pandemic, fear, and social distancing, Maggie’s story shows just how powerful faith in oneself and others can be. But it also demonstrates how selfless acts can change people’s lives and reshape their future.