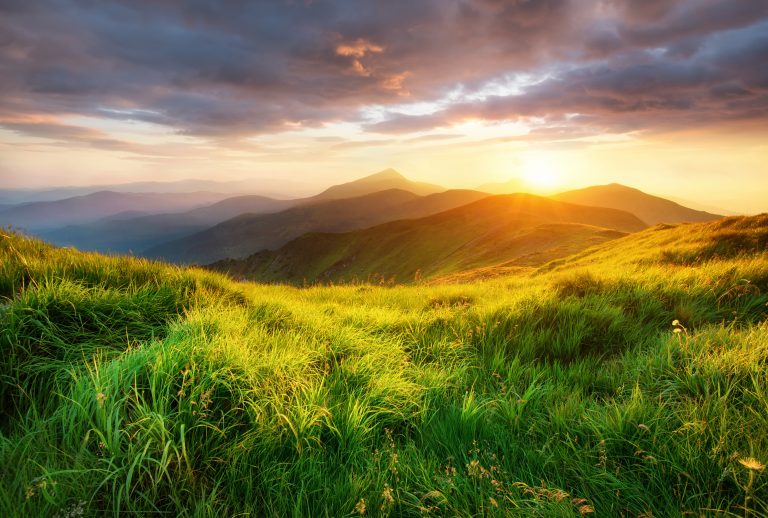 The next day dawned clear and bright. (Image: Biletskiy via Dreamstime)

At that time, there was a monk in Lingyin Temple on the bank of West Lake in Zhejiang Province. He acted like a madman, so people called him the “crazy monk.” One day, the crazy monk predicted that at noon the strange flying mountain would fly to the village and stop in front of Lingyin Temple.

He got up early that day and rushed into the village. He delivered the news door-to-door. He shouted: “Today, a mountain will fly to the village. We should evacuate the village as soon as possible; otherwise, it will be too late!” He shouted until his mouth was dry and his lips were cracked, but no one believed him.

The sun rose higher and the noon hour was approaching. The monk became very anxious. At that moment, he suddenly heard the sound of music and he ran toward the sound. He saw there was a wedding taking place, where there were many people in attendance.

The monk protects the villagers from the flying mountain

The crazy monk rushed over, picked up the bride, and carried her on his shoulders as he ran out of the village. The crazy monk had kidnapped the bride! The whole village leaped into action. Every man and woman, both young and the old, chased after the monk.

Carrying the bride on his shoulders, the monk continued running and hurried ahead. The villagers chased him a dozen kilometers, but they could not catch up with him. As the sun rose over their heads, the monk stopped. He put down the bride from his shoulders and sat down on the ground.

The villagers rushed up to him and wanted to beat him up. Just at that moment, the sky turned dark and there were flashes of lightning. The villagers heard a huge “bang” and saw the flying mountain drop on their village. The people then understood why the crazy monk had kidnapped the bride — it was to save everyone’s life!

As the villagers were ready to leave, the monk spoke:

“Don’t go; listen to me. The mountain was able to fly into our village; it will fly away from here too. If it flies somewhere else, it might kill many others.

“We should carve 500 stone Buddhas into the flying mountain. They can overpower the mountain and it will not fly away to hurt others.”

They were busy all night. By the time morning came, 500 stone Arhats were finished, but they realized the Buddhas had no eyes or eyebrows. The monk said: “I know what to do; let me try!” Using his long fingernails, he scratched the statues’ faces. Soon, the eyes and eyebrows of the 500 stone Arhats were all fixed.

Ever since then, this small mountain has not flown elsewhere, but it has always remained in front of Lingyin Temple. Since it had flown in, people called it “the flying mountain.”