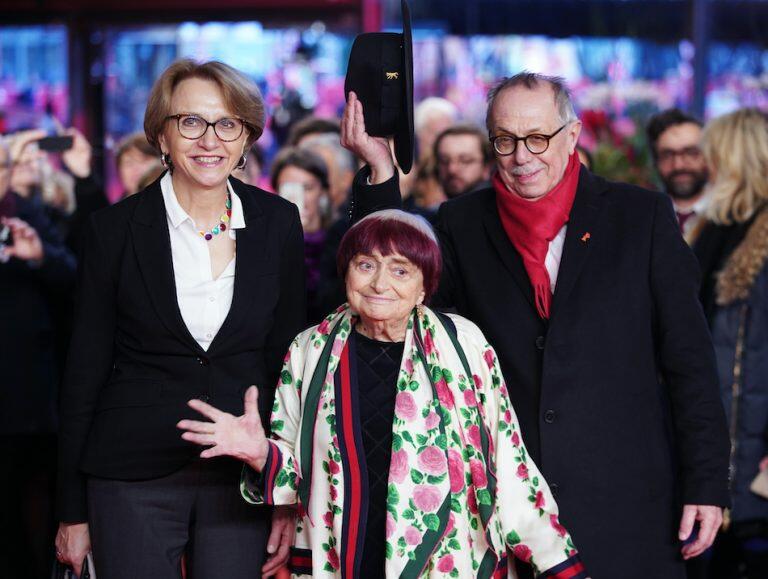 Agnès Varda films are like some kind of magic to me. Right before I was about to give birth for the first time, I went and saw one last film at the cinema knowing I wouldn’t be back for a while. It left me feeling warmed and my heart uplifted. It was Agnès Varda’s road trip documentary film through rural France titled Faces Places.

“Varda and JR visit villages, small towns, and factories throughout France to meet communities of people and create large portraits of them to plaster on the surroundings. The process brings the two artists together as friends.

“Varda repeatedly refers to Les fiancés du pont MacDonald, a short film she made with Jean-Luc Godard and Anna Karina in 1961. The film revolves around a young man, played by Godard, who sees the world through dark glasses. Varda notes the resemblance between Godard, who himself frequently wore sunglasses inside, and JR, whose public image includes sunglasses. Eventually, Varda and JR travel to Switzerland so that she may introduce him to Godard. When they arrive at Godard’s house, however, he rudely refuses to see them — bringing Varda to tears. To soothe her, JR shows her his face unobscured, but since she is losing her sight, we only see him blurred.”

Termed the mother and sometimes grandmother of the French wave, Agnès Varda made the type of film that five years later Francois Truffaut and Jean-Luc Goddard would begin to make. Agnès Varda films started out as very highly stylized. And prior to this, she spent her early years as a photographer. She then moved into a documentary, and the way she explores the world and the characters within is also highly self-reflective.

Over the years, Agnès Varda films have been some of the most thought-provoking films in cinema. She focuses on characters who are marginalized or on the edges of society and gives her a unique perspective on the world in a gentle, curious, and non-judgmental way. At 90 years of age, Agnès Varda passed away in 2019, yet her work is everlasting.

This is Varda’s debut film and is a graceful penetrating study of a marriage on the rocks. It is off the chart in terms of striking visual aesthetics.

The film is set in the seaside village of La Pointe Courte, the birthplace of the husband who struggles to understand his bored Paris-born wife.

Cléo, a selfish French singer, is anxious to get results back from her doctor, believing she has cancer and will die of the disease.

We follow her for two hours while she cruises through the streets of Paris visiting friends who fail to give her the emotional support she needs. She finds comfort talking to a soldier in a park on leave from the Algerian War; his troubles put hers in perspective.

A collaboration between Varda’s husband Jacques Demy and herself as she recreates his early life, with fictional sections and a brief documentary that involves the dying Demy.

“His childhood was his treasure,” his wife and filmmaker express in a deeply heartfelt moment. Demy passed away prior to its release, resulting in a sort of uneasy combination of swan song and elegy.

Agnes Varda was inspired by an 1867 painting by Jean-Francois Millet. She went to the French countryside to videotape people who scavenge.

Taking everything from surplus in the fields to rubbish in trashcans to oysters washed up after a storm. Gleaners range from those sadly in need to those hoping to recreate the community activity of centuries past. Varda’s amusing narration is what makes this for me.

Okay, this is three powerful shorts in one (and worth sneaking all three on the list). It demonstrates Varda’s lifelong fascination with photography and the ways we create, value, and interpret photographs.

Ydessa, the Bears and etc. is about a curator’s peculiar collection of pictures of people with teddy bears. Salut les Cubains is the oldest of the three films from 1963 looks at the revolution via a photo exhibit some 10 years on. Ulysse is an examination from 1982 of a photo Varda took in the 1950s — this one is superb.