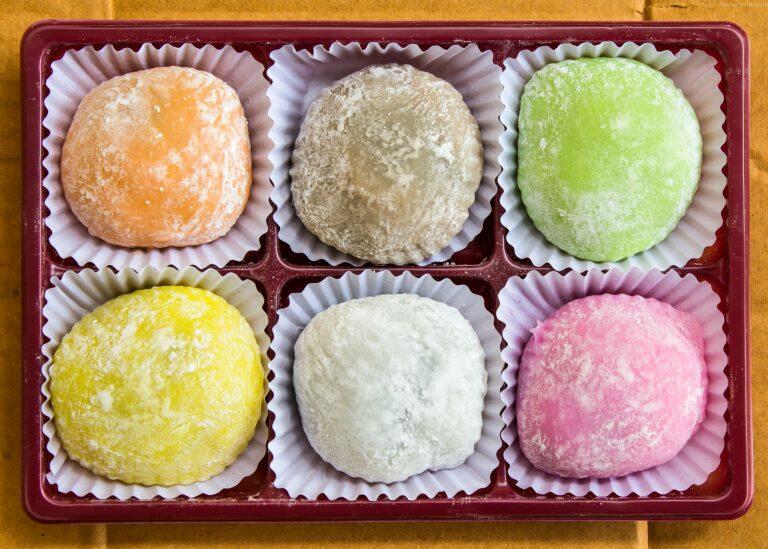 Mochi is something you can't get away from in Japan. (Image: Photoraidz via Dreamstime)

Mochi is something you can’t get away from in Japan. It’s one of Japan’s most interesting foods, and it’s so chewy and delicious that it alone will have you yearning to return to an authentic Japanese mochi shop once your vacation is over.

It is an often sweet, but also savory, variety of rice-based food made by pounding glutinous rice until it sticks together in a lump and becomes malleable. Then it is made into a variety of foods that are loved as much for their taste as the fun way you eat them.

The history and tradition of mochi

Though Japan is famous for it, you will also find excellent mochi in Taiwan. Taiwan is so crazy about it that there is even a Taiwan Mochi Museum that moonlights as a factory.

Japan ruled Taiwan for a period of 50 years starting in the late 1800s. Even so, history is a complicated thing, and Taiwanese mochi makers may have brought some of that tradition over from Mainland China, as China also has a tradition of eating a glutinous rice-based food similar to it.

China, being the forefather of the region, may have passed the tradition on to Japan at some point, having already passed many things to Japan early in history, like the written language, culture, architecture, dress, martial arts, and beliefs.

Some say that early Japanese settlers sailed over from China, or perhaps Mongolia. Mochi masters like the one in the video take pride in keeping such a tradition alive. Production in Japan is believed to have begun as far back as the Yayoi period, which started in 300 B.C.

Originallly, it was made from nutrition-rich red rice. Because of its auspicious and divine connotations, it was only eaten by the emperor and by the nobility. It also came to be used in religious ceremonies as offerings to gods.

Eventually, the tradition shifted into something people eat around New Year’s time. Foods made from it are an integral part of New Year’s celebrations in Japan. During that time, you can find it stacked in twos, in soup, and roasted.

It is of course available all year round for those who have the craving. In Taiwan, you can find people making it fresh in street-side stands. Being crazy for mochi has its downsides. People have died from eating it.

It’s not because of food poisoning or shady ingredients or anything like that, it’s because of overenthusiastic young children or elderly people who throw a whole mochi in their mouth while forgetting just how much chewing needs to go into eating it. This has led to suffocation through choking.

The one quality that makes mochi so interesting, its chewiness, is also what has made it so dangerous. Don’t let it scare you, just be mindful of chewing well before swallowing.

Mochi in Asia has a light, delicate flavor. It is unlike the packaged varieties you see sold in Asian supermarkets in the U.S. where it is overly sweet and not as chewy.

Don’t think you’ve tasted the real thing until you’ve eaten it at the source. There is a good reason people travel to taste authentic food. The taste is worth the trip.

There are those rare specialty shops outside of Asia where you can taste fresh mochi. If you need something closer to home, head to Simply Mochi in San Francisco, California.

They make it fresh and it gets excellent reviews. The owner of the shop was inspired by a trip to Japan that left her with a craving that she couldn’t put away, just like you will have once you taste the fresh stuff.