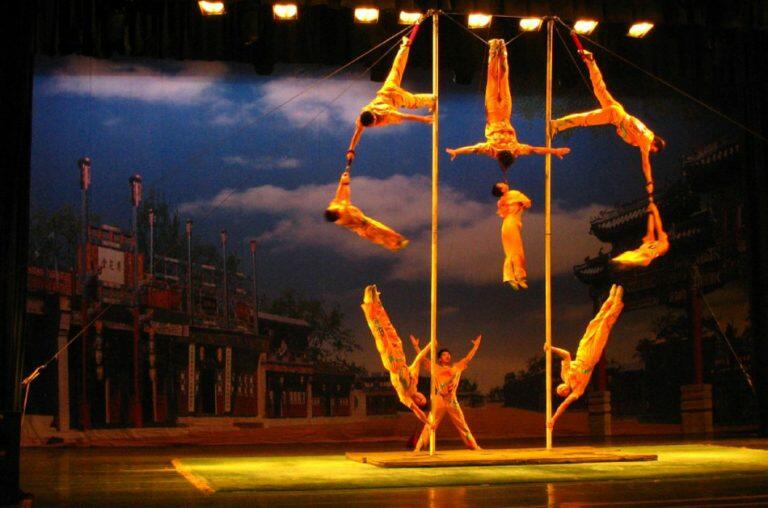 Chinese pole acrobatics involves the use of a vertical pole on which performers climb, hold poses, and execute various movements. (Image: Greg via Flickr)

Historical records, such as mural paintings and brick carvings discovered in a Han Dynasty tomb in Chengdu, Szechuan Province, show that the origins of Chinese pole acrobatics date back more than 2,000 years. This type of acrobatics was developed mostly in the Qin and Han dynasties (221 B.C.-A.D. 230)

The way European and American circuses developed in the past was by picking up novelty acts, often with the use of animals, and was partly driven by commercial needs.

Chinese took a different approach and just worked with what they already had to perfect their moves and presentation, and they would constantly increase the level of difficulty.

With Chinese pole acrobatics, the poles were originally laced with rubber material and were 10-30 feet high.

A well-known trick is called “the flag,” where the acrobat hangs straight out at a 90-degree angle using nothing but core and arm strength.

The burn marks performers would get on their shoulders from training ended up becoming a way for acrobats to know who also trained, and also gain respect for one another in this art form.

Cirque Du Soleil uses Chinese pole acrobatics in their performances these days, so you might be able to catch some there if you like what you see.

For now, enjoy this old footage of some neatly cut performers, and to learn more about the history of Chinese acrobatic theater, check out Circopedia.