Don’t Miss the Best Meteor Shower of the Year 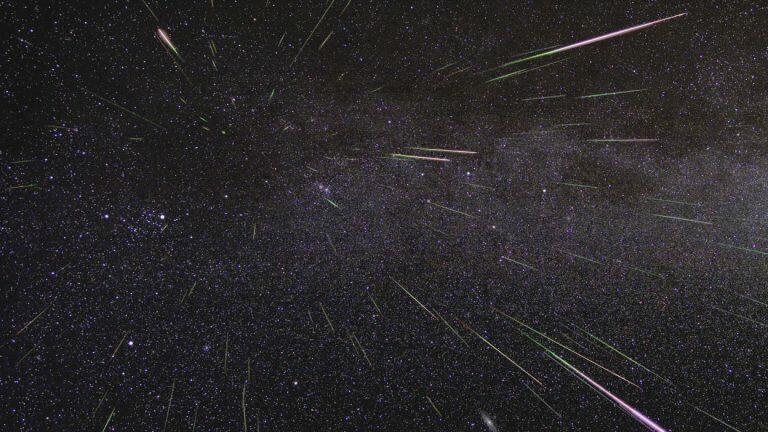 An outburst of Perseid meteors lights up the sky in August 2009 in this time-lapse image. Stargazers expect a similar outburst during next week’s Perseid meteor shower, which will be visible overnight on August 11 and 12. (Image: JPL via NASA)

Astronomy lovers have been waiting eagerly for a celestial event that is dubbed by NASA as the year’s best meteor shower. The much-awaited Perseid meteor shower 2021 will result in the nocturnal sky getting lit with streaks of light and various hues. NASA first spotted the meteor shower on July 26 at the Mount Lemmon Observatory.

The Perseids are a prolific meteor shower that can be viewed with the naked eye on August 11 and 12. The meteors are called the Perseids because the point from which they appear to hail from lies in the constellation Perseus.

What is a meteor shower?

A meteor is a space rock — or meteoroid — that enters Earth’s atmosphere. As the space rock falls toward Earth, the resistance — or drag — of the air on the rock makes it extremely hot. What we see is a “shooting star.” That bright streak is not actually the rock, but rather the glowing hot air as the hot rock zips through the atmosphere.

When Earth encounters many meteoroids at once, we call it a meteor shower.

Why would Earth encounter many meteoroids at once? Well, comets, like Earth and the other planets, also orbit the Sun. Unlike the nearly circular orbits of the planets, the orbits of comets are usually quite lop-sided.

As a comet gets closer to the Sun, some of its icy surfaces boil off, releasing lots of particles of dust and rock. This comet debris gets strewn out along the comet’s path, especially in the inner solar system (where we live) as the Sun’s heat boils off more and more ice and debris. Then, several times each year as Earth makes its journey around the Sun, its orbit crosses the orbit of a comet, which means Earth smacks into a bunch of comet debris.

The Perseid meteor shower is a famous astronomical event that takes place when the Earth goes through the Swift-Tuttle comet’s tail section every year. Debris from the comet’s debris field that passes through the atmosphere leads to the creation of an enticing and dazzling “shooting star” show.

Compared to regular meteor showers, this one creates brighter and bigger explosions of light in the sky. The meteors are suspected to hail from the Perseus constellation but you can view the shower in the night sky. The viewing condition, however, has to be ideal.

Since the peak on August 11 and 12 will take place after the new moon, you should not face any hardship in observing the meteor shower. Observers can see around 100 shooting stars an hour. This will be made possible by the emergence of a waxing crescent moon, which will result in a dark sky at night.

A rare treat for stargazers

NASA astronauts think stargazers should stay awake between midnight and dawn on the two nights to view the entire show. Provided the sky remains free of a large amount of light pollution, the shooting stars will appear as small streaks of light, passing at super-fast speed. Observers should be able to spot as many as 40 Perseids an hour.

Even if the weather or light pollution affects peak night viewing, observers need not despair, says NASA, as they will live stream the much-awaited celestial event on their Facebook, Twitter, and YouTube channel, as well as on NASA TV.