Chinese Folktale: The Cowherd and the Weaver Girl 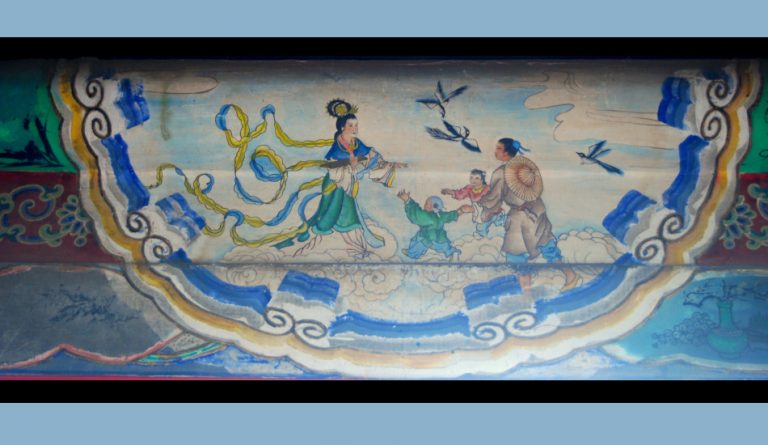 The reunion of the couple of 'The Weaver Girl and the Cowherd' on the bridge of magpies. Artwork in the Long Corridor of the Summer Palace in Beijing. (Image: Wikimedia / CC0 1.0)

Chinese Valentine’s Day is celebrated on the 7th day of the 7th month of the lunar calendar. Amid the celebration, some recall the folktale that inspired this day — the Cowherd and the Weaver Girl.

The folktale behind a Chinese tradition

The tale of the Cowherd and the Weaver Girl can be traced to Chinese folk culture. While there are many variations of the folktale, the essence of the story revolves around the annual union of two lovers.

The story begins with seven fairy sisters who lived in heaven. One day, after obtaining permission from the Goddess of Heaven, they took a trip to the mortal world. They decided to take ample time to complete the trip because they had obtained permission after many rejections from the Goddess. Landing in the mortal world, they decided to first bathe in a lake that was located near the cow herder’s home.

They enjoyed their time together, splashed in the water, and laughed. But the sounds caused to cow herder to wake up from his sleep and step out to inspect the source of the commotion. As he went near the lake, he could see the fairies swimming.

Encouraged by his mischievous companion the ox, he stole their clothes and waited to see what would happen. The fairy sisters elected the youngest and most beautiful sister Zhinu to retrieve their clothing. She agreed to do so, but since Niulang had seen her, she agreed to his request for marriage. She proved to be a wonderful wife, and Niulang to be a good and loving husband. They lived happily together on Niulang’s farm and had two children.

However, after spending considerable time in the mortal world, the other six fairies became worried about their sister as it was forbidden for them to marry a mortal man. The fairies kept it a secret as they did not want the Goddess of Heaven to find out about Zhinu’s marriage with the mortal cow herder.

However, the Goddess eventually finally found out about the conjugal relation between the two and ordered Zhinu to return to heaven to resume her former duty of weaving colorful clouds, a task she neglected while living on earth with a mortal.

On Earth, Niulang was very upset that his wife had disappeared. He couldn’t fathom his life without her. Seeing his master’s misery, Niulang’s ox suggested he kill him and put on his hide, and in doing so, he might be able to travel to heaven to reunite with his fairy wife. Sad about his actions, the cowherd killed his ox and put on his hide. As he was able to travel to heaven, he took both his children along to see Zhinu.

The cowherd’s actions made the Goddess of Heaven furious and taking out her hairpin, the Goddess scratched a wide river in the sky to separate the two lovers forever, thus forming the Milky Way between Altair and Vega.

Zhinu must sit forever on one side of the river, sadly weaving on her loom, while Niulang watches her from afar and takes care of their two children. However, the Goddess of Heaven, after much time and consideration, finally allowed Niulang and Zhinu to see each other for one night a year.

Thus, once a year, all the magpies in the world would take pity on them and fly up into heaven to form a bridge over the star Deneb in the Cygnus constellation so the lovers may be together for a single night, which is the seventh night of the seventh moon.

The Qixi Festival, also known as the Qiqiao Festival, is a Chinese celebration of the annual meeting of the cowherd and weaver girl. The festival is celebrated on the seventh day of the seventh lunisolar month on the Chinese calendar. The festival was derived from the worship of natural astrology.

While the tale inspires us to find our match, it also comes with the moral that partners must stay by each other in hardships and navigate through them.

Thus, if you are trying to find a potential lover, consider the lesson of the Cowherd and the Weaver Girl and remember not to give up in the face of difficulties or hardships.

And if you already have a match, remember to express your love, affection, and gratitude toward them for better, for worse, for richer, for poorer, in sickness and in health till death do you both part.