11 Fascinating and Feathery Facts About Peacocks 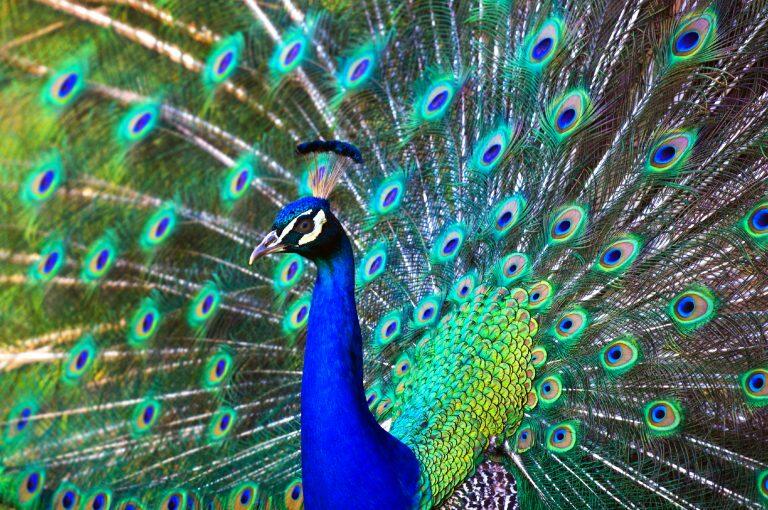 The sheer beauty of peacocks and the elegance of their tails is enthralling. (Image: Rui Matos via Dreamstime)

Peacocks have always fascinated humans and the tradition of monarchs keeping these birds as pets corroborates this fact. Their sheer beauty is enthralling. However, not many people are aware of the lifestyle and habits of these gorgeous-looking birds with their spectacular feathers and elongated tails.

1. How many peacock species exist?

There are broadly three types of peacocks. They are put under the peafowl family. The Indian and green peafowl are seen mostly in the Asian nations. The Congo peafowl has African descent.

Some people feel curious about the flying capacity of peacocks. You may feel owing to such an elongated and heavy tail these birds lack the ability to fly. However, the truth is they can fly and they do the job quite well. However, they cannot fly for a long distance. This is despite the fact that their tails comprise approximately 60 percent of their entire body weight. It can be as long as 6 feet.

The flying style may look a little unusual compared to the flying pattern of most other birds. You may feel as if the bird is jumping from one place to another! In fact, peacocks run quite fast, too, at an approximate speed of 16 km/hour. They fly mostly to escape predators.

3. What habitats do they prefer?

Nearly every bird species is known for picking specific habitats for making nests. Peacocks usually do not set up nests in very high or elevated areas. They prefer dwelling on the ground. However, they often inhabit dilapidated mansions or abodes deserted by humans. These birds are seen in the wild in areas close to farmlands and forests. They are also spotted in rainforests and bushlands. You can see them perching on the treetops in the wilderness.

4. What are their diet and eating habits?

Peacocks are typically omnivorous birds and so they gorge on fruits, seeds, and small insects a lot. However, they love eating grains too. They also kill and eat small reptiles like young cobra snakes, toads, and rodents.

5. Are peacocks amiable toward humans?

Generally, they are social birds and do not find humans much threatening. However, if a bird feels a person or even another bird is encroaching on its territory, it may get aggressive. Wild peacocks sometimes indulge in playing games. They prefer playing in sunny weather.

6. What kind of sound do they make?

Peacocks make a screeching and shrill sound, completely in contrast with their enticing and majestic looks. They are among the loudest birds, as it is. It is in the monsoon months that the frequency of calls goes up. Before the rain, they make a specific type of meowing sound. These birds can make 11 types of sounds, according to ornithologists. These include mating calls and giving alert signals when a predator is around. Sometimes, these birds can make fake sounds to gain the attention of peahens during the mating season.

7. What enemies do they have?

Peacocks face threats from predatory animals like tigers, wildcats, raccoons, and wild dogs. However, they are not much targeted by large predatory birds.

No, this is one prevalent myth regarding the species. This is caused by selective breeding. This is triggered by a genetic condition known as leucism. The lack of pigmentation makes all their feathers white.

No, these gorgeous-looking birds lack the ability to swim. This is owing to the fact that they do not have webbed feet and without them, birds can’t swim. Besides, their feathers are not suited for swimming.

10. Do all peacock species display plumage?

No, only the Indian peacock is capable of showing splendid plumage. The other peacock species have shorter tails.

11. What is the average lifespan of peacocks?

On average, they live for 15 to 20 years in the wild. In captivity though, they can live up to 40 years or a little longer.