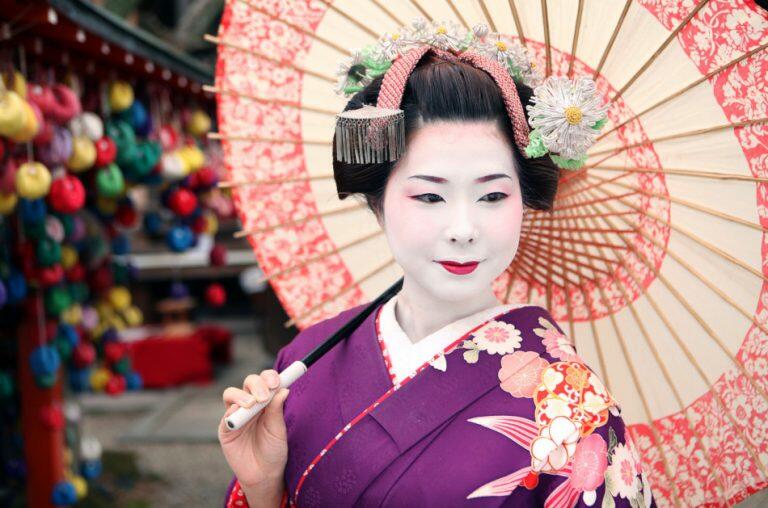 Ohaguro or 'blackened teeth' is most commonly associated with Japan. (Image: Johnasanpo studio via Dreamstime)

Ohaguro — or “blackened teeth” — is a practice in which people, mainly women, dye their teeth black. While the custom of Ohaguro was practiced in different parts of the world, It is most commonly associated with Japan.

Society has always dictated what is attractive and beautiful, and this is no exception. Up until the end of the 19th century, blackened teeth were considered a sign of beauty in Japan. However, it was more than a mark of beauty, it served other purposes as well.

The traditional method was to soak iron filings in tea or saké until the iron oxidized, turning the liquid black. Because it had such an awful taste, spices such as cinnamon, cloves, and anise would also be added to ease the taste. The dye would then be drunk by the person, making their teeth turn black.

However, to keep their teeth black they would have to repeat the process once a day, or at least once every few days. After a long time of conducting the practice, it seemed to have had a permanent effect, as there have been skeletons recovered from the Edo period with teeth that are still black.

It remains unclear when, or even how, the practice of Ohaguro began, however, it is known that during the Heian period (8th–12th century A.D.) it became popular. Aristocrats, particularly the female members, practiced dying their teeth during this period.

The Heian period was also a time when white faces were another desirable trait. But it was found that when the white makeup (made of rice powder) was applied, it caused the person’s teeth to look yellow. To overcome this problem, women started to paint their teeth black.

It’s also believed that when the teeth were blackened, an illusion was created where a wide smile could be presented without showing the teeth. There were some benefits to the practice of Ohaguro, as it would strengthen the teeth, protecting the person from dental problems such as cavities. Samurai were also said to have practiced Ohaguro, demonstrating their loyalty toward their masters.

A new fashion within Japan

The practice continued through the preceding periods of Japanese history. By the time the Edo period (17th–19th century A.D.) had arrived, the practice had spread from the aristocratic class to other social classes.

It was during this period that Ohaguro was commonly practiced among the married, the unmarried women over 18 years old, prostitutes, and geishas, turning the practice of Ohaguro into something to signify a woman’s sexual maturity.

It wasn’t until the Meiji period, which followed the Edo period, that the practice of Ohaguro became unfashionable and was no longer considered attractive or beautiful. Then, in 1870, Ohaguro was banned by the government during its attempt to modernize the country.

A new trend had started — keeping teeth white — and then in 1873, the Empress of Japan herself embraced the new fashion by appearing in public with white teeth. It wasn’t long before white teeth were seen as a mark of beauty, with Ohaguro slowly losing its grip among the Japanese people.

However, even though Ohaguro has died out among the general public, it is still used by some, and it can still be seen in the Geisha quarters in Kyoto.

The legend lives on

There is a yokai — a supernatural spirit/monster in Japanese folklore — called the Ohaguro Bettari — translated as “nothing but blackened teeth.” It is said to look like a beautiful woman dressed in wedding clothes from behind. The folklore says that she enjoys calling single young men over to her.

As the men move toward her, her face remains out of view. Then, when the men are within seeing distance, she reveals her white face, which is featureless, except for a huge mouth with a set of black teeth.