9 of China’s Most Spectacular Villages 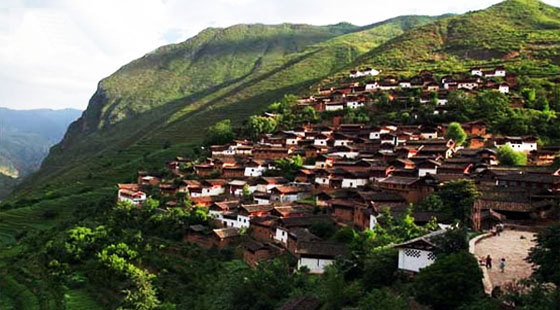 The stone village is accessible only by passing through two stone gates. (Image: NTDTV)

Frequent visitors to China find themselves blown away by this country, ranging from high-desert monasteries to pristine lakes nestled among Himalayan peaks. First-time China visitors and seasoned travelers alike will enjoy this list of China’s most spectacular villages that transports you to places you might never otherwise have found.

9 of China’s most spectacular villages

1. The stone village in Yunnan Province

In Yunnan Province’s Lijiang City, there is a village of 108 families on a giant mushroom-shaped rock. Located deep in the Jinshajiang River ravine, the village was built in the early Song Dynasty by Naxi’s ancestors. The location was chosen to resist invasion by bandits, and this has passed the test of time — over the 1,000 years of its existence, the village has resisted any and all attempts at invasion. The village is accessible only by passing through two stone gates. The design of each house was determined by the terrain of the rock it was built on, with the result being a breathtaking work of art carved out of a giant rock.

2. The fossil village in southern Yunnan

The fossil village is located 30 miles away from Shiping County in Yunnan Province. According to archeological experts, houses in the village were built with a type of fossil, so it is commonly called the fossil village, and it’s also known as Laoxudian Cottage by local residents.

Hongde Village’s nearest train station is Maocaoping, located only 1.2 miles from the village. This is not very far and should be an easy walk for most people. However, between the village and the station, there is a canyon called Wu Meng Large Crack Canyon, which the villagers call “broken road.” The canyon has sheer vertical sides approaching 90 degrees, which villagers must negotiate to get to the station. It takes at least two hours to traverse this challenging terrain.

This village is situated in Gansu Province’s Yongchang County on the edge of the Gobi desert. The residents are blond, with prominent noses, reddish-toned skin, and sunken eyes. There was a Roman legion fighting in Central Asia during the Eastern Han Dynasty (53 B.C.) that mysteriously disappeared. British scholars have speculated that this Roman legion might have been taken to Liqian City. The DNA of 93 villagers was analyzed and 91 of those tested showed that their DNA profile was identical to that of people of Central and West Asian origins.

Dongmiaozhai in Guizhou Province’s Ziyun County is arguably the last cave-dwelling community in Asia. The village has a population of 73 people from 18 families who live in a cave that is 100 meters wide and 200 meters deep. It is believed that the residents’ ancestors first moved there to avoid being attacked by bandits.

On the sea just outside of Sanduo in southeast China’s Fujian Province, there are rows and rows of floating houses stretching over hundreds of square kilometers. This is China’s largest floating village on the sea, boasting more than 10,000 residents. All aspects of life are carried out on the sea, with the village entirely dependent on aquaculture for its survival.

Under the rough sea near Dongying, Beichuan, Dongzhai, and Pugian Harbors of Hainan Island, the remains of 72 villages have been discovered on the ocean floor. It is believed that the villages were destroyed by a rare massive earthquake more than 300 years ago. These sunken villages are the only submarine ruins to be found in China. At a depth of approximately 30 feet, many houses and courtyards have been remarkably well preserved.

In the beautiful mountainous hinterland of Nanchang City’s Meiling area, there is a small remote village known as “Thunder Village,” which people avoid like the plague. It is besieged by lightning all year round. Dozens of villagers have been struck, with four deaths recorded from lightning strikes over the last 20 years. Needless to say, visitors to this remote village are few and far between.

Jujing Village is a village featuring typical Hui-style architecture that is situated in Jiangxi Province’s Wuyuan County. The village was designed and built by the renowned Feng Shui master He Pu during the early Song Dynasty. He Pu was the first generation of the He family in Wuyan County. Jujing Village is referred to as the roundest village in China and is also called Bagua village. There are many cultural relics featured in the village, including a horizontal board that was inscribed by Emperor Chongzhen of the Ming Dynasty (1627-44).