A Guide to the Amazing Kokeshi Dolls of Japan 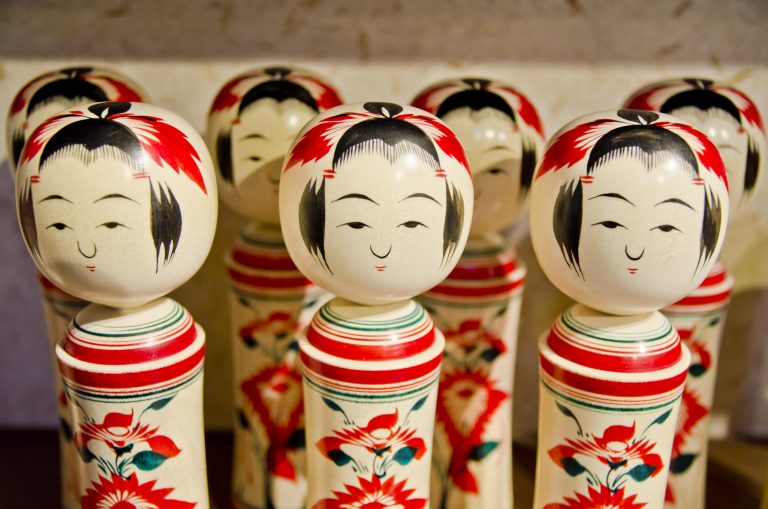 Japan is known for its amazing cuisine and progress in technological fields; however, the Asian country also has some age-old arts and crafts that have been nurtured and preserved over the years. One such example is the craft of kokeshi dolls.

Kokeshi wood dolls have their origins in Japan’s tōhoku region. Its origin can be traced back to 150 years ago, during the Edo period. These lovely wooden dolls are crafted by hand and sport colorful floral designs. While the dolls do not have legs and arms, they have become an integral part of folk art in Japan.

The origins of kokeshi dolls

The six prefectures located in the Tōhoku region are known for making kokeshi dolls. Interestingly, each town has its own unique way of crafting and adorning these wooden dolls. The art of kokeshi began in Japan during the 1860s. To make souvenirs for tourists exploring the mountains and hot springs in northern parts of Japan, kokeshi craftsmen started making these cute dolls and they proved to be a hit. The toys are made out of solid blocks of wood.

A craft passed on from one generation to the next

The skills required for making these wooden dolls are passed down from one generation to the next. The sons of kokeshi artisans become apprentices and so they master the craft from their family elders. Now, women are also getting into this craft, as efforts are being made to preserve the art tradition.

Professional kokeshi crafters ensure every aspect of doll making is done under their supervision. They handle everything from painting and waxing following the traditions. Most kokeshi dolls are crafted manually using cherry wood.

To give shape to the dolls, the artisans use chisel-like tools. They use a soft weasel-fur brush for painting the dolls. Waxing is done at the last stage. The artists also leave their signatures on these dolls. From every angle, a finished doll looks aesthetic and bears marks of sheer craftsmanship.

The various styles of kokeshi dolls

There are a dozen variations of kokeshi and the most popular ones are Nakanosawa, Nanbu, Naruko, Tsugaru, Yajiro, and Yamagata. These traditional styles are named after regions in Japan. The variety of the various kokeshi dolls is amazing. From hairstyle to attire and facial expressions, each style is distinct. The style has been influenced by subjects like history and literature, seasons, mythology, etc.

Naruko kokeshi made in the Miyagi Prefecture is quite popular. These dolls squeak if the heads are turned. They have tiny red lips and a single eyelid. The body is concave and has the “Kasanegiku” pattern. The “Hijiori Onsen” style is unique too.

The Hijiori dolls have double lids and happy-looking eyes, along with tiny red lips, eyebrows, and a nose. Typically, the body is yellow and may feature a maple leaf design sometimes. The Nakanosawa kokeshi is a popular variant of kokeshi dolls. These dolls are marked by their flared nostrils, pink blush, and wide almond eyes. In the local dialect, they are called Tako Bozo.

The largest kokeshi collection is organized in the Miyagi Zao Kokeshi Museum in Miyagi Prefecture. There you can find almost 5,500 dolls and some of these were crafted by famous kokeshi masters. Visitors are amazed seeing the dolls and they can also learn the craft.

The evolution of the craft and growing popularity

Post-WWII, a sub-genre emerged and it is called creative kokeshi. These are non-traditional wooden dolls with carved hairstyles, rich hues, and Western attire. While these are not traditional, these variants made kokeshi art popular outside Japan. It was after the 1940s that the kokeshi art form got a renewed push for creativity and exploring artistic possibilities.

The Sosaku kokeshi artists brought a new level of variety and imagination to the craft. The dolls made by these artisans were larger and quite elegant. They also used varying types of wood for making the dolls.