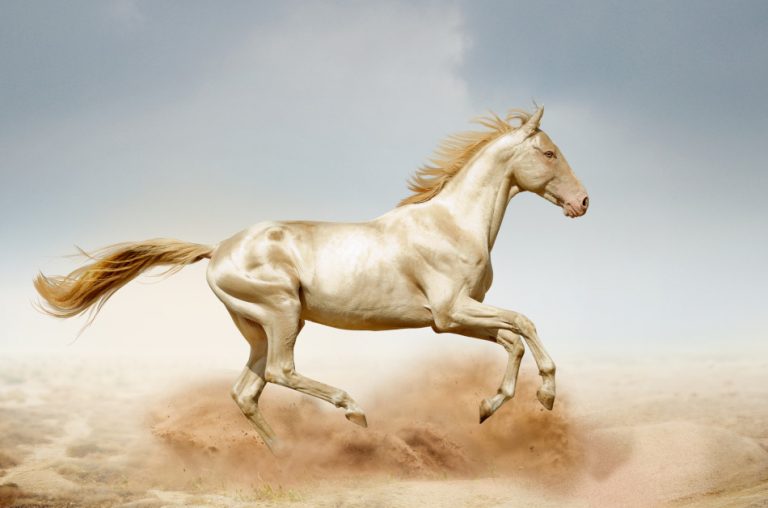 Akhal-Teke is one of the world's most ancient and mysterious breeds of horses, found in a remote desert country, hidden until the late 1800s. (Image: Olga Itina via Dreamstime)

Akhal-Teke horses are a rare horse breed that has an amazing beauty —they almost look photoshopped. It’s actually one of the world’s most ancient and mysterious breeds and is found in a remote desert country, hidden until the late 1800s.

A light-golden horse like the one featured above has been touted as the most beautiful horse in the world. However, this title is unofficial, as there was no judging — just someone’s opinion. But I can appreciate the almost “other-worldly” quality of this horse.

This horse appears as if it’s straight off a child’s toy carousel, with it’s delicate features and a metallic shiny coat.

The mysterious and ancient Akhal-Teke horses

These are the features of one of the rarest breeds of horse in the world — Akhal-Teke, discovered in Turkmenistan as recently as 1881. These stunning horses are the prized possession of the tribesmen of the Karakum Desert.

Look at the Akhal-Teke horses in this video with their shiny metallic coats. They are a highly agile and athletic breed.

We know little of this ancient breed’s history, apart from evidence of their domestication some 3,000 years ago from ancient archaeological remains in the Turkmenistan region.

Apart from these findings, only an oral record has been passed down by the Turkomen tribesmen.

This breed’s name, Akhal-Teke, was given to them by a Russian general approximately 100 years ago. Before then, they were called Nisean, Turanian, Median, and had nicknames such as Divine Horse, or Heavenly Horse, probably due to the golden hue of their lustrous coats, and the fact they were so highly depended upon by these tribespeople. Perhaps they really were a gift from heaven?