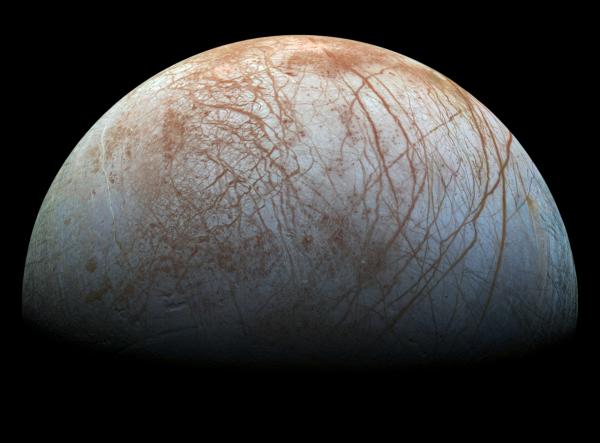 This image taken by NASA's Galileo spacecraft in the late 1990s shows Europa’s ice shell, marked by fractures and impact craters, and it evokes a sense of mystery about what lies within it and beneath that shell. The color variations on the surface show that there’s communication between the surface and subsurface, the nature of which is a subject of intense study. This paper helps us to understand the effects of constant surface bombardment on materials that may be available for study at the surface. (Image: JPL-Caltech / SETI Institute via NASA)

Small impact craters on Jupiter’s moon Europa could eventually offer scientists a glimpse of possible habitability below the body’s frozen surface, a new paper on which Planetary Science Institute Senior Scientist Rebecca Ghent is an author.

Europa has a global ocean covered by an icy surface that is covered with small impacts from the past tens of millions of years that are about 12 inches, or 30 centimeters, deep that have caused impact gardening, the vertical mixing that occurs when impact craters move material both toward the surface, by excavation, and downward, by burial.

But biomolecules, substances that are produced by cells and living organisms, uncovered by impact gardening could be harmed by radiation when exposed, said Ghent, a co-author on Impact gardening on Europa and repercussions for possible biosignatures that appears July 12 in Nature Astronomy. Emily S. Costello of the University of Hawaii at Manoa is the lead author of the paper. Ghent, who worked with Costello on the original development of the gardening model that underpins this work, said:

“Radiation at Europa’s surface is so intense that it can break delicate biomolecules. Impact gardening cycles possible biomolecules into the zone of radiation. This work therefore provides some valuable new constraints on where to look if we hope to find the evidence of life.

“If we want to find evidence of pristine biomolecules unaltered by radiation in Europa’s ice, we have to either dig down beyond about a 30 centimeter depth – deeper in some regions – or find places where fresh material has recently been brought to the surface by recent impact craters.”

“The work in this paper could provide guidance for design of instruments or missions seeking biomolecules; it also provides a framework for future investigation using higher-resolution images from upcoming missions, which would help to generate more precise estimates on the depth of gardening in various specific regions.

“The key parameters in this study are the impact flux and cratering rates.  With better estimates of these parameters, and higher-resolution imaging resulting from upcoming missions, it will be possible to better predict the depths to which gardening has affected the shallow ice in specific regions.”

Provided by: Planetary Science Institute [Note: Materials may be edited for content and length.]