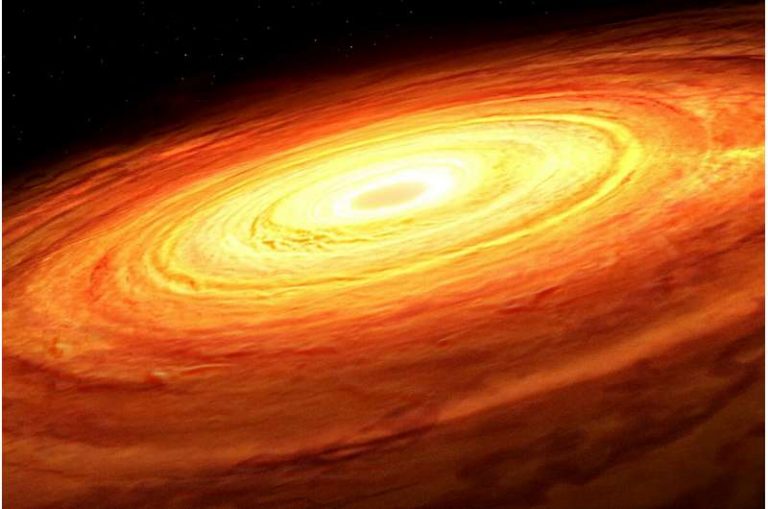 An artist’s impression of an accretion disk rotating around an unseen supermassive black hole. The accretion process produces random fluctuations in luminosity from the disk over time, a pattern found to be related to the mass of the black hole in a new study led by University of Illinois Urbana-Champaign researchers. (Image: Mark A. Garlick / Simons Foundation)

Black hole feeding patterns offer insight into their size, researchers report. A new study revealed that the flickering in the brightness observed in actively feeding supermassive black holes is related to their mass. Supermassive black holes are millions to billions of times more massive than the sun and usually reside at the center of massive galaxies.

When dormant and not feeding on the gas and stars surrounding them, SMBHs emit very little light; the only way astronomers can detect them is through their gravitational influences on stars and gas in their vicinity. However, in the early universe, when SMBHs were rapidly growing, they were actively feeding — or accreting — materials at intensive rates, and they were emitting an enormous amount of radiation, sometimes outshining the entire galaxy in which they resided, the researchers said.

The new study, led by the University of Illinois Urbana-Champaign astronomy graduate student Colin Burke and professor Yue Shen, uncovered a definitive relationship between the mass of actively feeding SMBHs and the characteristic timescale in the light-flickering pattern. The findings are published in the journal Science.

The observed light from an accreting SMBH is not constant. Due to physical processes that are not yet understood, it displays a ubiquitous flickering over timescales ranging from hours to decades. Burke said:

“There have been many studies that explored possible relations of the observed flickering and the mass of the SMBH, but the results have been inconclusive and sometimes controversial.”

The team compiled a large data set of actively feeding SMBHs to study the variability pattern of flickering. They identified a characteristic timescale, over which the pattern changes, that tightly correlates with the mass of the SMBH. The researchers then compared the results with accreting white dwarfs, the remnants of stars like our sun, and found that the same timescale-mass relation holds, even though white dwarfs are millions to billions of times less massive than SMBHs.

The team compared black hole feeding to our eating or drinking activity by equating this transition to a human belch. Babies frequently burp while drinking milk, while adults can hold in the burp for a more extended amount of time. Black holes kind of do the same thing while feeding, they said, Shen added:

“These results suggest that the processes driving the flickering during accretion are universal, whether the central object is a supermassive black hole or a much more lightweight white dwarf.”

Yan-Fei Jiang, a researcher at the Flatiron Institute and study co-author, said:

“The firm establishment of a connection between the observed light flicker and fundamental properties of the accretor will certainly help us better understand accretion processes.”

IMBHs are expected to form in large numbers through the history of the universe, and they may provide the seeds necessary to grow into SMBHs later. However, observationally this population of IMBHs is surprisingly elusive. There is only one indisputably confirmed IMBH that weighs about 150 times the mass of the sun. But that IMBH was serendipitously discovered by the gravitational wave radiation from the coalescence of two less-massive black holes, Burke said:

“Now that there is a correlation between the flickering pattern and the mass of the central accreting object, we can use it to predict what the flickering signal from an IMBH might look like.”

Astronomers worldwide are waiting for the official kickoff of an era of massive surveys that monitor the dynamic and variable sky. The Vera C. Rubin Observatory in Chile’s Legacy Survey of Space and Time will survey the sky over a decade and collect light flickering data for billions of objects, starting in late 2023. Co-author Xin Liu, an astronomy professor at the U. of I, said:

“Mining the LSST data set to search for flickering patterns that are consistent with accreting IMBHs has the potential to discover and fully understand this long-sought mysterious population of black holes.”

Provided by: University of Illinois at Urbana-Champaign [Note: Materials may be edited for content and length.]