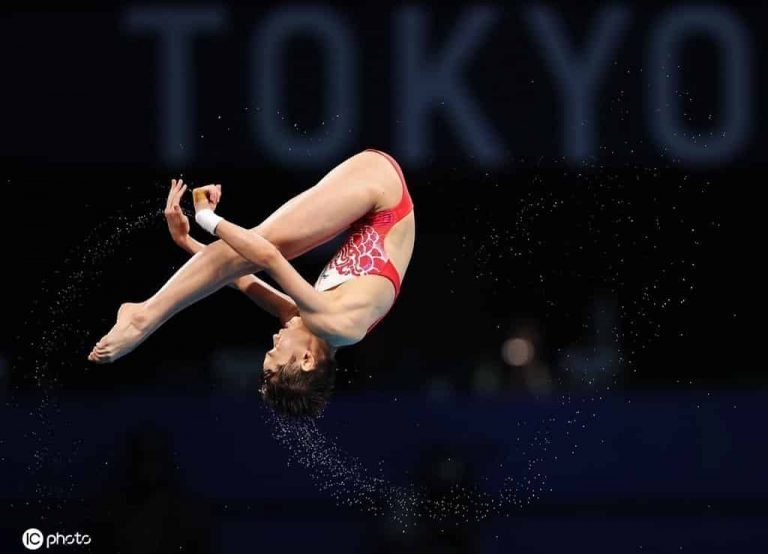 Quan Hongchan is the third of five children born to a family of farmers. (Image: IC via Wikipedia)

In an interview after the event, she did not thank the country and the coach as other Chinese athletes did, but said frankly that she wanted to make money to treat her mother who is ill.

Quan winning gold became the hottest topic on the Chinese Internet. But there is not much joy in this gold medal. Her poverty, hard work, and honesty moved people to tears when they heard her story.

According to Chinese media, Quan attended a press conference after winning gold on August 5. When reporters asked about the secret to getting a full score in diving, the little girl only laughed with embarrassment and said, “Keep practicing gradually by yourself.”

Concerned about her mother

Quan then said: “My mother is sick and I don’t know what disease she has. I want to make money and go home to treat her disease. I have to make a lot of money, and then cure her…” The little girl choked up as she talked.

Quan was born in a rural village in Zhanjiang, Guangdong, with a per capita annual income of only RMB 11,000 (US$1,696). Her family income is lower than the local standard of living.

Quan’s parents have five children and she’s the third. Her father is a farmer and her mother is in poor health. After a car accident in 2017, she was hospitalized several times, and the family savings were exhausted.

Quan was selected by her coach to practice diving at the sports school when she was seven years old because of her good figure, the highest score in the standing jump, and good flexibility. Because she disliked studying, Quan thought that she could practice diving instead of going to school.

Zhanjiang is known as the diving capital of China as many famous Olympic athletes have trained there. The poor local families all hope that their children will be able to excel in diving to earn a good future. Quan’s younger brother and sister are also practicing diving.

Poverty prompted Quan Hongchan to devote herself to diving. The coach said that she trains every day, and she has to jump more than 400 times. “All the scores are obtained through hard training.”

The Chinese Communist Party (CCP) always promotes the peoples’ happiness as the main theme. However, the poverty, hard practice, and frankness that Quan exposed in winning gold frankly embarrassed the CCP.

The WeChat public account “Middle-Class Living Observation” issued a post, pointing out that Chinese state media deliberately downplays her suffering when reporting on Quan Hongchan. It downplays her lack of time to learn so that she couldn’t even read the name of her mother’s illness, downplays the poverty in her family, downplays the hardship she has endured in order to reach this level, and only praises her diving skills.

The WeChat public account indicated that Chinese media want to present Quan as an “adorable,” “innocent,” and “cute” child. But this fails to portray who she really is. The more “naive” she is, the more her words force people to face the gravity of the situation. Behind Quan Hongchan’s innocence and purity lies the truth.

In the end, the article lamented: “Quan Hongchan was able to dive away from her birth circumstances. She is lucky, but many people like her aren’t.”

According to reports, after Quan won gold, her family is expected to leave their current situation and move into better circumstances. As well as the rumored gold medal bonus of at least RMB 500,000 (US$77,150), local companies and organizations also promised to provide her with a house, consumer goods, and RMB 500,000 in cash. Now that she is famous, many businesses are also clamoring for her endorsements.

We hope that she remains unspoiled and truthful despite the sycophantic attention of Chinese media and businesses.