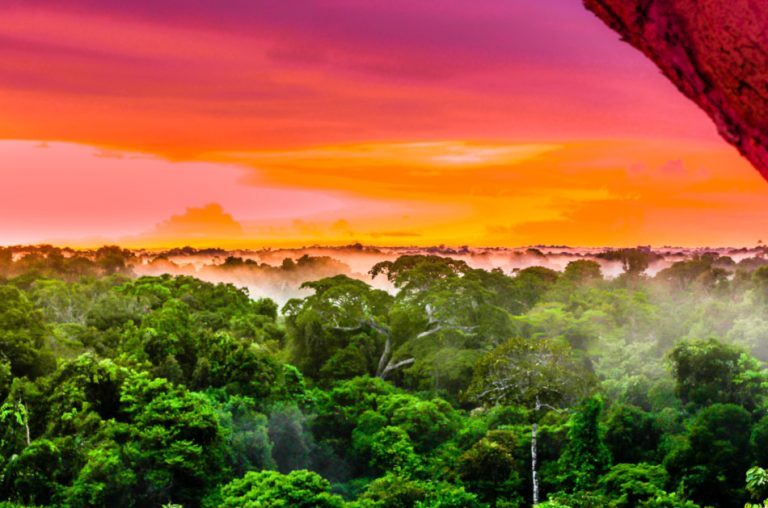 On the surface, the Amazon Rainforest and the Sahara Desert don't seem to have any connection, but viewed from outerspace, it's a different story. (Image: Ulf Huebner via Dreamstime)

The Amazon rainforest is in the northeast of South America and is a dense humid jungle, while the Sahara Desert is a mass of a nearly uninterrupted band of sand that lies on the northern part of Africa. When strong winds move across the Sahara, Saharan dust is what connects the two. A huge cloud of dust rises in the air and then stretches between each of the continents.

A NASA satellite for the first time has quantified in three dimensions the dust that is moving across the Atlantic. Scientists have also been able to calculate how much phosphorus from the desert’s ancient lake bed is making the trip to one of the world’s most fertile places.

Watch as a NASA satellite tracks Saharan dust to the Amazon in 3D:

A paper published in Geophysical Research Letters, a journal of the American Geophysical Union, provides the first satellite-based estimate of this phosphorus transport over multiple years, said lead author Hongbin Yu, an atmospheric scientist at the University of Maryland.

This trans-continental journey of dust is important because of what is in the dust, Yu said. Specifically, the dust is picked up from the Bodélé Depression in Chad, an ancient lake bed where rock minerals composed of dead microorganisms are loaded with phosphorus. Phosphorus is an essential nutrient for plant proteins and growth, which the Amazon rainforest depends on in order to flourish, NASA said on their website.

NASA went on to report that the phosphorus that reaches Amazon soils from Saharan dust, an estimated 22,000 tons per year, is about the same amount as that lost from rain and flooding, Yu said. The finding is part of a bigger research effort to understand the role of dust and aerosols in the environment and on local and global climates.

“We know that dust is very important in many ways. It is an essential component of the Earth system. Dust will affect climate and, at the same time, climate change will affect dust,” said Yu. To understand what those effects may be, first, we have to try to answer two basic questions. How much dust is transported? And what is the relationship between the amount of dust transport and climate indicators?”

Data shows that an average of 182 million tons of dust every year is carried past the western edge of the Sahara.

While the dust is crossing the Atlantic, some falls to the surface or is forced down through rain events, but approximately 132 million tons end up over the Amazon basin. Roughly 43 million tons travel on to the Caribbean Sea.

I would never have thought that dust would travel that far or have such a critical impact on local environments.