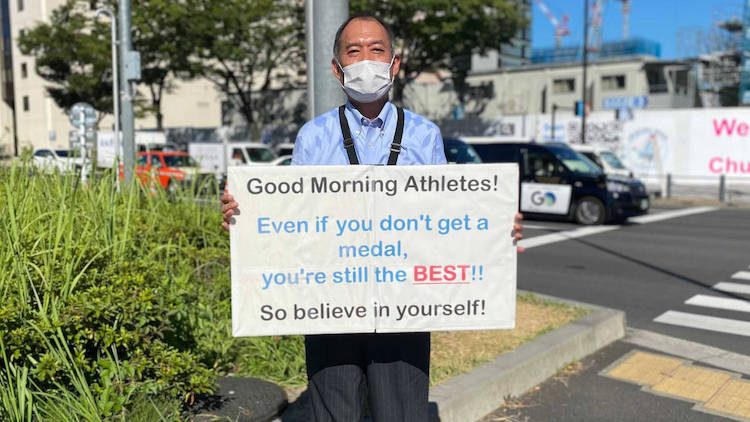 One man wanted to remind the hardworking athletes that even if they didn’t get the gold, silver, or bronze, they’re still pretty remarkable. (Image: Youka Nagase via Facebook)

The Tokyo Olympics that took place amidst the pandemic restrictions will remain memorable for a number of reasons. However, the Olympic Games are not only about winning medals. This year’s Olympics was also marked by the deeds of individuals who highlighted the value of humanity. This included one man who stood outside the Tokyo Olympic Village every day with a motivational poster.

A man providing motivation outside the Tokyo Olympic Village

The man whose identity is yet to be known did his best to cheer up the participating candidates. He would stand outside the village for a couple of hours every day. He was there to make the athletes feel better by standing with his inspiring posters.

The athletes who participate in the Olympics have to endure significant pressure and such inspiring gestures help them considerably. Eventually, the news of motivational Olympic posters went viral on the web.

The anonymous Japanese man would turn up outside the Tokyo Olympic village at around 7 a.m. every day with his posters. One of his posters read “Good morning athletes! Even if you don’t get a medal, you’re still the best! So believe in yourself.” This is so true, but stressed athletes often forget the reality. The man would hold the sign high whenever a bus carrying the athletes passed by the place. Obviously, the athletes took notice of the man.

The reality is the Tokyo Olympics saw the athletes becoming more vocal about stress and mental health issues.

In the last week of July, gymnast Simone Biles stepped down at the Tokyo Olympics due to mental and physical health concerns. Her decision was made after, just a few months ago, Olympic tennis player Naomi Osaka also made headlines when she stepped away from a press conference, and then the French Open tournaments, to care for her mental health.

Biles and Osaka are two young elite athletes who are often lauded by many as the Greatest of All-Time (GOAT) and expected to go for nothing other than gold.

For those high-ranking athletes, the press can add a layer of stress. When Osaka backed out of press conferences at the French Open in May, citing “disregard for athletes’ mental health,” she received backlash on many fronts: from tennis officials, the media, and even in the forms of a US$15,000 fine and possible tournament expulsion.

Amidst all this, Osaka pulled out of the tournament.

Now, they’re leading the way in publicly acknowledging their mental health struggles. Through their actions and words, they’re expressing: “It’s OK not to be OK.”

An act of kindness outside the Tokyo Olympic Village

The man was inspired to make that change when he noticed people’s obsession with medal counts, wanting to recognize that even without a medal it was still an accomplishment to reach the Olympics. After standing outside for two hours every morning from July 22 to August 8 — the full duration of the Games — his motivational words truly made an impact. He went viral on social media due to the appreciative Olympic athletes who posted his picture and their reactions to his daily motivational greeting. And they weren’t the only ones who were touched by his kind actions.

It is not clear what motivated the middle-aged man to stand up every day to cheer the athletes in the sweltering heat. However, he was in no mood to become famous for his deeds and it seems he wants to remain anonymous. Still, there is no doubt his generous and humanitarian act created the desired impact on the athletes and others.