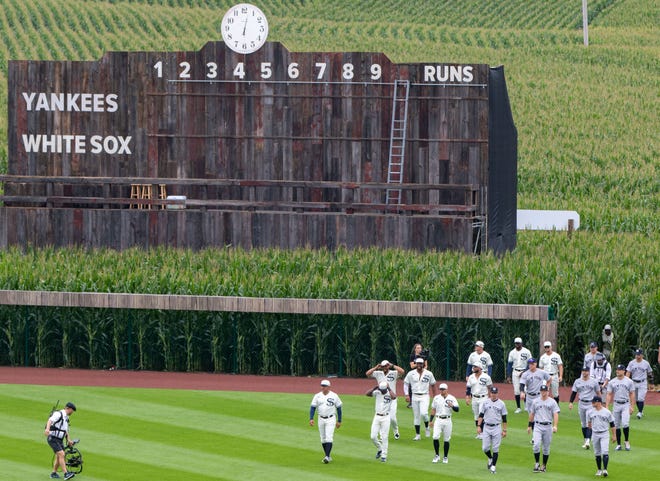 Two of baseball's most historic teams gathered on a tiny piece of land in Dyersville, Iowa, for the first (but not last) Field of Dreams Game. (Image: MLB Network via YouTube)

For Yankees and White Sox fans, baseball is not just a game, it is an emotion. While most of the world is crazy about cricket or football, Iowa boasts heaven for baseball lovers. The iconic field of dreams in Iowa hosted the 2021 Major League Baseball (MLB) in the place, and the emotions that the location experienced is surely worthy to be captured as a movie.

MLB announced a New York Yankees versus Chicago White Sox match to be played at the Field of Dreams stadium. The match that was played on August 12 did justice to the game. So much so that the Field of Dreams Game is coming back, and this time the Chicago Cubs and Cincinnati Reds will get to emerge from the cornstalks in Dyersville, Iowa, on August 11, 2022.

All hardcore baseball fans and aspiring baseball players will remember the 1989 movie entitled Field of Dreams, where a farmer portrayed by Kevin Costner converts part of his cornfield into a baseball field. The story was adapted from W. P. Kinsella’s 1982 novel Shoeless Joe. Such was the impact and adaptation that the film was selected by the Library of Congress of the United States National Film Registry for preservation, as the film has a positive impact culturally, esthetically, and historically.

The film follows the journey of the farmer and how he builds a stadium for the ghosts of baseball legends to play. Before 2021, the Dyersville, Iowa, site was a remote cornfield for Kevin Costner and baseball fans to visit, but on August 12, fans were welcomed to a specially constructed stadium in the iconic movie location.

The field of dreams is a real place, and now it has become even more real as a match between Yankees and White Sox ensured that it was cemented in sports history forever.

Build it and they will come

Making the pivotal dialogue of the film come true, the field of dreams stadium was built and MLB fans came in droves, right from the entry through the cornfields to the teams playing. Each aspect of the game was like a dream. While the movie highlighted Iowa in a beautiful and memorable way, the game itself recreated a memorial experience for generations to come.

The game began with Kevin Costner entering the stadium through the cornfields. His introduction was stunning, to say the least, for the two-time Academy Award winner. After walking around the mounds, he turned toward the outfield from where the players of the two teams emerged. For the live audience, it was the perfect reel that met the real moment.

Another surprise for the viewers was the uniforms worn by the players. Both the White Sox and the Yankees played the game with specifically designed throwbacks. The White Sox donned the classic white with navy pinstripes jersey with the SOX monogrammed on the left. The Yankees wore the grey uniform with “New York” stitched in blue across the chest.

The cornfield setting was a highlight in itself. Having a baseball match in a stadium that is part of a cornfield is a nightmare for the ball boys and girls charged with retrieving the balls, but with the game being a sort of homage to the iconic movie, this setting was a must. And the call made by MLB was justified, as viewers could not get enough and hoped that this becomes an MLB tradition.

Another memorable moment (for White Sox fans at least) was the walk-off two home runs by White Sox shortstop Tim Anderson from Yankee stand-in closer Zach Britton. The 2020 Silver Slugger Award winner Anderson sent the 94-mile-per-hour sinker right out of the stadium and into the cornfields, giving Chicago the win with a final score of White Sox 9, Yankees 8.