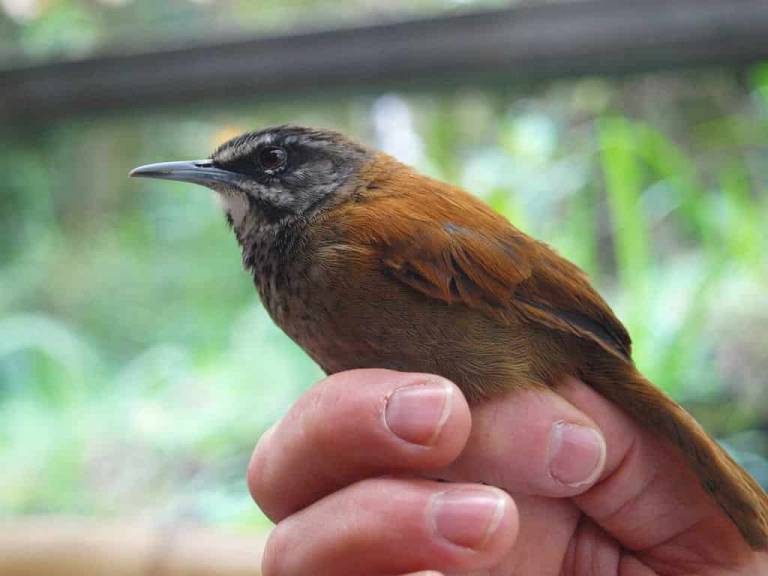 The study team carried out a unique study of plain-tailed wrens. (Image: Browerk via Wikipedia)

Singers who perform duets are said to have a very good understanding of musical chemistry and instinctively know where to join voices and sing solo during performances. However, a recent study indicates this kind of musical understanding is not only limited to humans. The study was carried out in Ecuador on duetting songbirds and concluded that songbirds stay in sync by muting the neurons of the other bird as they sing a duet.

The study team carried out a unique study of plain-tailed wrens. They observed both male and female birds of that species that sing duets. The researchers were amazed to find that these singing birds can impact brain activity in their partners. They saw the auditory feedback exchanged between such birds for performing duets inhibits motor circuits in the listening partner temporarily. This, in turn, helps link the brain of the partner bird to help the songbirds stay in sync.

This amazing coordination results in what can be called a telepathic performance. This study corroborates the concept of humans and other species using sensory cues to sing a duet.

New Jersey Institute of Technology’s neurobiologist Eric Fortune, which led the study, said: “You could say that timing is everything. What these wrens have shown us is that for any good collaboration, partners need to become ‘one’ through sensory linkages. The take-home message is that when we are cooperating well… we become a single entity with our partners.”

The corresponding author of the study and Scripps College’s associate professor of biology Melissa Coleman said these birds function much like jazz singers. She added: “Duetting wrens have a rough song structure planned before they sing, but as the song evolves, they must rapidly coordinate by receiving constant input from their counterpart. What we expected to find was a highly active set of specialized neurons that coordinate this turn-taking, but instead what we found is that hearing each other actually causes inhibition of those neurons — that’s the key regulating the incredible timing between the two.”

Songbirds stay in sync through a form of telepathy

To carry out the study, the team went to the region close to Ecuador’s Antisana Volcano. The remote bamboo forest is the natural habitat of the plain-tail wrens. They recorded the voices of native wrens as the birds sang in solo and duet mode. It was a neurophysiological recording that focused on the birds’ brains and analyzed sensorimotor activity. The recordings revealed that during those duets, the songbirds stay in sync and it sounds as if a single bird is singing. The reality is that the male and female birds take turns quite fast and it appears as a unified song.

Fortune said the neural inhibition is akin to a trampoline working mechanism. He added: “These mechanisms are shared or similar to what happens in our brains because we are doing the same kind of things. There are similar brain circuits in humans that are involved in learning and coordinating vocalizations.”

Fortune and Coleman are of the view that this study’s findings offer new insights into the working methodology of human and bird brains. The brain’s sensors work in a way that resembles telepathic coordination. The study findings were later published in the Proceedings of the National Academy of Sciences of the United States of America (PNAS).

The study finding is important not only for bird lovers, said Fortune, but the analysis of the singing sync can also help scientists develop better robots in the future. Present generation robots are not very good at co-operating with humans, they are better at performing pre-programmed tasks. The neural control mechanism studied in the songbirds can be handy in developing advanced robots in the future.