Did You Know That Candle Clocks Were the First Alarm Clocks? 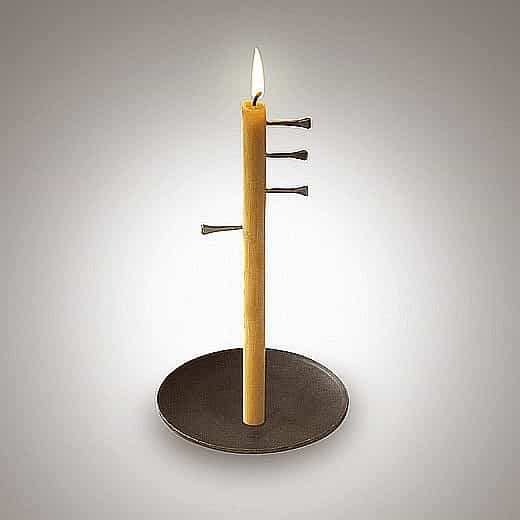 Candle clocks were used extensively when there were a limited number of mechanical clocks. (Image: Flyout via Wikipedia)

People use various types of clocks to keep track of time, from digital and analog wristwatches to smartphones and health bands. Go back several centuries and you will be surprised to know that candle clocks were used to track time. Of course, candles have been used for various purposes, such as illuminating places and enjoying romantic dinners. However, there was a time when candles were often used to track time.

The advantages of candle clocks

They were used extensively when there were a limited number of mechanical clocks. And even after the arrival of the latter, they were still used in many places. Here are some inherent benefits of candle clocks:

The drawbacks of candle clocks

Candle clocks, while easy to use, had their drawbacks for tracking time.

Some early examples of candle clocks

It is difficult to determine the exact origin of the candle clocks and there exist conflicting opinions on the same. The first reference can be found in a Chinese poem written by a poet named You Jiangu that dates back to 520 CE. He narrated using six uniform candles having the same weight and thickness and 12 inches in height.

An inch of the candle would get depleted in 20 minutes and so a candle would last for 4 hours, approximately. The candles were kept in enclosed structures to ensure the flame was not disrupted by anything easily.

Another reference to candle clocks in Asia was found in Japan around the first millennium CE.

In ancient England, King Alfred the Great used candle clocks to track time. The candles were marked to ensure incremental measurements of time could be tracked. In medieval churches, they were often utilized to schedule prayers, masses, and bell ringing.

A Muslim engineer and polymath, Al-Jazari, made an intricate candle clock in the 12th century. He used pulleys and weights in his candle clock. He also made water-based clocks for tracking astrological movements.

Candle clocks were used in many ancient civilizations. There are some instances of using them as alarm clocks too. The candle clocks had nails inserted at specifically marked heights. As the candle would burn down the nails would fall and make a metallic sound. A metal plate was kept at the base of the candles. This was used in addition to natural alarms like the crowing of roosters.

The rise of mechanical clocks

The ancient way of using candles to tell the time continued until the 18th century when a succession of innovations and inventions led to increasingly accurate mechanical timekeeping devices.