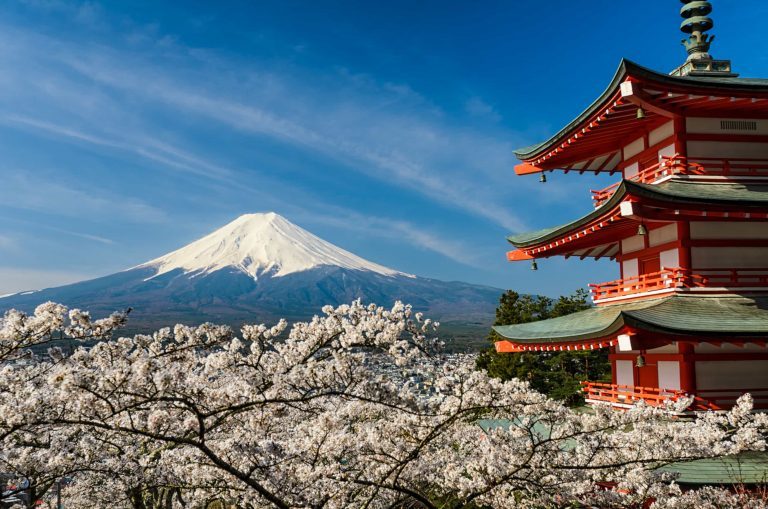 Japan is a sophisticated nation acclaimed for its friendliness and hospitality. (Image: Mapics via Dreamstime)

The Japanese people are struck by Mount Fuji’s beauty throughout the seasons and the nation has been in awe of it since ancient times. Locals learned to respect the mountain’s fiery nature, as it is an active stratovolcano. Mount Fuji is situated on the island of Honshu and is 100 kilometers (62 miles) away from Tokyo. It is Japan’s tallest mountain with a height of 3,776 meters (12,388 feet).

A stratovolcano is constructed by layers of hardened lava and tephra while having a cone shape. Its volcanic lava has ingredients that are a thick and sticky substance with high levels of silica. When it erupts, the flowing lava cools and goes hard before it can ooze out more across the land. Mount Fuji has many layers, with two other volcanos inside it.

In the years 864-866 northwest of Mount Fuji in a township known as Nagaoyama, the lava poured out of the volcano and landed on the houses, and flowed into lake Senoumi, and this created the present-day lakes. The Aokigahara Forest is known to be a bit spooky because trees grew from the massive hardened lava. The last eruption in 1707 that buried houses and fields reached Tokyo Bay. An earthquake was recorded 49 days before this eruption and measured 8.6 on the Richter scale.

In the 1970s, a mysterious, large, dark-colored figure was seen in the lakes. Experts and curious people came in large numbers wanting to see what the creature was. Video footage of it was taken, but it was not clear enough to see what the creature was. Underwater streams connect the lakes and the fish in the lakes are small in size. At the time, a fisherman saw it and thought it was a log, but it slivered away in the water.

Some theories are that someone has put eels or other large types of fish in the lakes. Other ideas are that it’s a prehistoric animal that survived the ice age. The lakes are not connected to the sea, so it’s puzzling to the locals. That’s why they named the creature Mossie. The name is derived from the Loch Ness monster in Scotland. There are no sightings nowadays but the mystery of Mossie still exists.

It is uncertain how the majestic mountain got its name. It is possible the name Mount Fuji originated from the Bamboo Cutter, which is a cultural Japanese story.

The bamboo cutter found a baby girl wrapped in a shiny bamboo stalk and she became his daughter. As she grew, her beautiful looks became famous everywhere around the country. She lived with her parents and took care of them throughout their old age.

Her name was Kaguya-hime and when her mother and father died, she knew it was time to return to the Moon City. As the Moon glows high and bright over Mount Fuji, a line of brilliant light forms from Heaven to Earth like a bridge, with numerous soldiers in shining armor. She took the immortal potion the soldiers gave her and rested overnight. With the morning dew, she rose up onto Mount Fuji and ascended to the grand silver gates on the Moon.

She was the Princess from the Moon and some say they still see a small white wreath of smoke circling the crown of Mount Fuji that reaches up like a bridge in the sky leading to the peaceful city on the Moon.

The Japanese refer to the volcanic mountain as Fuji-san. A well-known Japanese scholar, Hirata Atsutane, was from the school of the Four Great Men of Kokugaku. They studied Japanese philology, religious study, and philosophy. He believed the name Fujisan comes from the word meaning a mountain standing up shapely like the ear of a rice plant.

Archdeacon John Batchelor, 1854-1944, was a British missionary in Japan for 60 years. He lived on the Japanese island of Hokkaido, where the indigenous Japanese people are called Ainu. He translated the New Testament of the Bible into Ainu and was awarded by the Emperor of Japan with a Lambeth degree of Doctor of Divinity. He wrote a book about Ainu folklore and also completed a dictionary of Ainu in English. John Batchelor believed the name Mount Fuji came from the Ainu word for fire (fuchi) and also the fire deity Kamui Fuchi.

A Haiku by Kobayashi Issa

Haiku is a traditional Japanese poem that became popular in the 19th century. Kobayashi Issa wrote on his travels about insects and small creatures, observing them, and then he could reflect upon himself to write a poem.

This is a poem by Yamabe no Akahito (fl.724-736) from an ancient Japanese anthology called Manyoshu. His ability to portray the landscape in his writings was well known.

On Looking at Mount Fuji

of heaven and earth,

it has stood godlike,

the lofty peak of Fuji,

When I gaze afar,

across the high plain of heaven,

all beams blotted out,

all its light lost to view,

fear to drift over it,

and in all seasons

snow falls upon it.

I shall tell about it

and pass on the word

Going out on Tago bay,

it is pure white:

One of three holy mountains

Mount Fuji is one of the three holy mountains. Since ancient times, a faith arose as Fujisan Sengentaisha. They worship Asama no Okami, which is their term for Mount Fuji, and have shrines that surround the mountain. The volcanic mountain was active and shrines were built to placate Mount Fuji and the gods to prevent it from erupting.

In the eighth century, a surge of the ancient Japanese Mountain Worship began and the introduction of Buddhism arrived; the two beliefs joined and became Shugendo. The eruptions of Mount Fuji became calm and were not a threat anymore. The Shugendo started taking people for a vigorous trek up the mountain. Group expeditions were commonly called Fuji-ko in the years 1603 to 1867.

Today, it is still possible to see Fuji-ko pilgrims in white robes holding staffs as they walk, chanting “rokkon shojo.” This is a message to the spiritual power of the mountain for the six roots of the body and mind are to be cleansed. Rokkon means the six roots of sight, hearing, smell, taste, touch, and awareness, and shojo translates as purification. The Fuji-ko continue to worship Mount Fuji daily. The volcano has not erupted for 300 years — it isn’t common for a volcano that size to not be active for such a long time.

Most Japanese follow the custom of climbing Mount Fuji once in their lifetime. It is popular for people to take climbing paths in the summer. In the early morning before sunrise and when the sun begins to emerge from the horizon, many pray at this time.

Mount Fuji is a special place and UNESCO has made it a World Heritage Site for people from across the globe to visit and experience its historical significance. A festival is held yearly in November where the Fujisanhongu Sengentaisha gives an offering like rice and vegetables to the mountain. Floats are made to dedicate to the Gods of Mount Fuji to entertain them, to stop their anger, and to show people’s gratitude for their benevolence.