Nature Welcomes Us to Spring With Bright Yellow Wattle Flowers 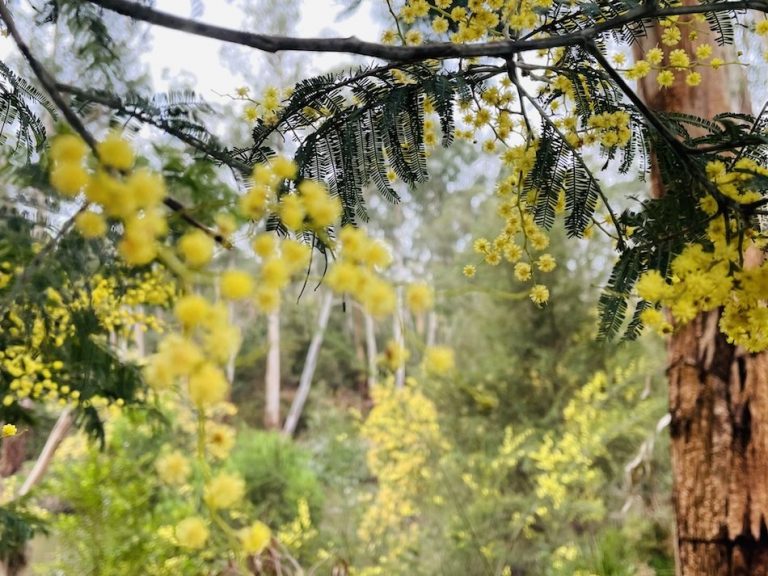 Walking by the Yarra River in Warrandyte, I noticed how amazingly the bright yellow wattle flowers stood out, like sparkling yellow lights glowing in the trees. Wattle is Australia’s national flower. The colors of this flower are green and golden yellow. When I see it, it always ignites my patriotic heart for my country.

September 1 is Wattle Day and it is a day when Australians can celebrate their national flower by wearing a sprig of wattle flowers and planting a variety of Acacia. This unofficial tradition emerged from people living in the British Colonies (now known as Australia) in the early 1900s when they started to develop a patriotic feeling for the land they lived on. There was a search for the nation’s identity with the intention of using a flower to represent their country.

Australia’s environment is vastly different from European countries where most of the first settlers came from. Early pioneers introduced their favorite exotic plants from their land of origin. Australia’s climate makes it the second driest continent in the world, with a soil structure that also differs greatly from Europe. In Australia, many plants could only be grown in shade houses or not at all. Only plants that could tolerate drought survived.

Archibald Campbell founded a plant study group, Wattle Club Victoria, in 1899. Through this platform, he could teach people about wattle plants and how unique the numerous species are throughout Australia. It was his hope that by doing so, he could gather support for making it the national flower. In 1901, to mark the achievement of federation, the wattle flowers were announced as Australia’s unofficial floral emblem. Wattle plants can survive turbulent winds, drought, and bushfires. Their resilient nature was the main reason why it was chosen to represent the people who live in Australia.

The interest in Australia’s native plants, and especially wattle, came about when, in 1908, Archibald Campbell began promoting Wattle Day by giving talks about the wattle flowers.

‘Wattle Time and Yellow-Haired September, by the numbers the wattle is almost exclusively Australian, and should undoubtedly be our national flower.’

In 1909, interest in Wattle Day enticed people in Sydney to celebrate the national flower of Australia. Other states like Victoria and South Australia joined the enthusiasm of Wattle Day in 1910 and Queensland joined in 1912.

In 1911, there was a report that South Africa was using an Acacia flower in patriotic ways and there was a stir in society that they should consider the waratah as Australia’s national flower. In 1912, Hon. Andrew Fischer, the Prime Minister of Australia, confirmed that wattle flowers had already been chosen as the national flower since they were already being used on the Coat of Arms. In 1913, a group called The Wattle Day League continued their mission of making Wattle Day an annual celebration for the 1st of September in recognition of the national flower.

A few decades later in 1988 on September 1, the bicentennial year for Australia, Acacia pycnantha became accepted and properly celebrated as being the national flower emblem. Hazel Hawke (former wife of Prime Minister Bob Hawke) planted a wattle tree on this day at the Australian National Botanic Gardens.

Success arrived after four years when the Minister of Environment Ros Kelly declared the 1st of September to be National Wattle Day at another ceremony at the Australian National Botanic Gardens. This is the start of spring in Australia and most wattle flowers bloom in this season. There are only a few species that produce a show of flowers in other months.

There are over 1,350 species in the genera Acacia, which is commonly known as a wattle. Wattle flowers appear as a cluster of small golden-yellow fluffy ball-type flowers on a long stem. Species of Acacia are found in different parts of the world. Asia has 89 species, Africa has 144, America has 185, and the Pacific region has 7 species. In comparison, there are 1,000 different types that grow in every state of Australia.

This genre is constantly being scrutinized by botanists to truly determine if plants belong to the Acacia group or not. All Acacia have the characteristics of crowded or round heads of flowers and the leaf structure that is bipinnate, with some species changing to phyllodes type leaves; the fruit is a pod that splits into a row of seeds.

Acacia plants are categorized in the subfamily Mimosoideae, a part of the pea family, Fabaceae. Plants belonging to the Mimosoideae family all have the ability to enrich soils by transforming nitrogen from the air into soil-bound nitrogen using nodules on their roots. The wattle flowers transform from a spike of globular heads that come in yellow, cream, white, and even pink, into a pod like a pea.

The Acacia pea pods are not considered edible, but there are a few varieties that can be consumed after the correct preparation. The Australian aboriginals put them on a fire and used other processes to take toxic chemicals out of the seeds. The seeds are then ground down to flour to make cakes. Today, wattle seeds can be purchased in supermarkets and are stored with other spices; they have a nutty flavor.

Acacia melanoxlon is known as Blackwood and has been the most favored wood sourced from this group of trees by indigenous people and the early settlers. Blackwood is still popular and in use today. The Mulga wattle and Gidgee are also known as superb timbers to use. Gidgee is preferred for the ringed patterns found in the wood where the tree has some malformations in it. Guitars, ukuleles, and other instruments have been made from Australian acacia wood.

Many species have a high content of psychoactive alkaloids that can be used to alter mood, perception, consciousness, cognition, and one’s behavior. There is a high content of tannins in the Acacia plant’s bark. The Blackwood, Silver Wattle, Black Wattle, and Golden Wattle tannins have been used in the tannery industry.

The Australian aboriginal people are knowledgeable in utilizing parts of the acacia plant. The seed or the gum from the wattle plant was used for food and the wood was used to make tools and weapons. Medicine was created by using the smoke via a smudging stick made from the correct part of the plant and the smoke then surrounded the person being treated. The wattle bark smoke could treat diarrhea and it was also used to relieve pain.

For the indigenous Bundjalung people from the Northern Coast of NSW, situated past Sydney, when they saw wattle flowers, this was a sign that the Eastern long neck turtle was now in its breeding season and shouldn’t be hunted. For the Wurunderjeri indigenous people from the greater part of Melbourne in Victoria, when they spotted the Silver Acacia flowering, they knew that they could now begin to harvest eels.

For many living where there is an abundance of wattle trees and shrubs, when they start to see wattle flowers in late August, it makes them feel more cheerful as it’s a sign spring is arriving, bringing bright flowers and more sunshine for outdoor activities!