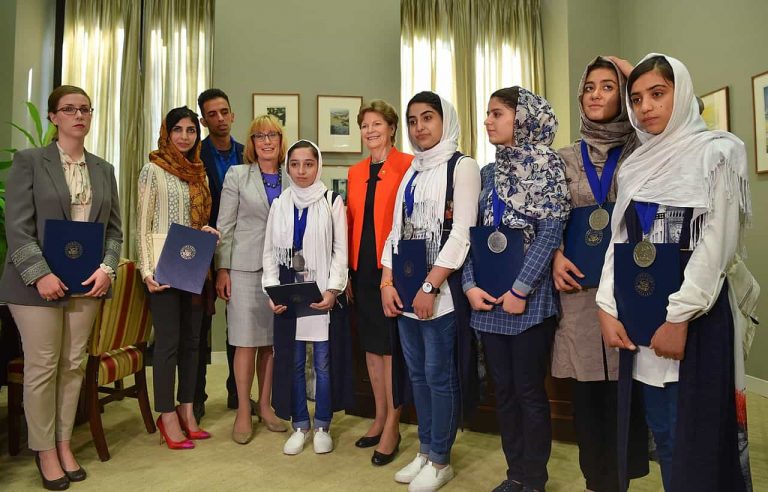 The world is keenly observing the developments in Afghanistan, the nation that underwent a complete takeover by Taliban forces. While residents are still trying to escape the war-torn country, it was the dramatic escape of the Afghan all-girl robotics team that made headlines.

Thankfully, 10 of the Afghan all-girl robotics team managed to escape to Qatar. This was made possible after the Qatar government provided them with a safe route and an aircraft. A later group of 5 fled to Mexico.

The Afghan all-girl robotics team would have faced an uncertain future under Taliban control. The group, which follows an extreme interpretation of Islam, barred girls from getting an education when it last controlled Afghanistan from 1996 to 2001. The Taliban now says it will allow more freedoms for women, though many Afghans are skeptical.

After the Taliban’s takeover of Afghanistan, emergency evacuations went into high gear. The Hamid Karzai International Airport in Kabul was the site of a chaotic situation as thousands attempted to flee the war-torn country.

Ten members of the Afghan all-girl robotics team (all of whom were aged below 18) left Kabul on a commercial flight to Doha, Qatar, on August 17. This was after several of their earlier efforts to flee their homeland failed. Five more members of the team escaped to Mexico City a week later.

The parent organization of the team, the New York-based Digital Citizen Fund (DCF), confirmed that the Afghan all-girl robotics team reached Qatar and Mexico safely. The organization thanked both governments for their assistance and efforts in expediting the visa process and sending a separate aircraft amidst repeated flight cancellations.

The work to bring the girls to Doha began on August 12 when Roya Mahboob, the DCF founder, and Elizabeth Schaeffer Brown, a DCF board member, asked Qatar for help. Government officials had stayed in touch with the team after hosting it in Doha in 2019.

“The Taliban have promised to allow girls to be educated to whatever extent allowed by Shariah law,” Mahboob said in a statement obtained by The New York Times. “We will have to wait and see to what that means. Obviously, we hope that women and girls will be allowed to pursue dreams and opportunities under the Taliban because that is what is best for Afghanistan and in fact the world.”

The girls who fled will settle in Qatar to continue their education, Mahboob said, while others plan to stay in Afghanistan, at least for now.

The Afghan all-girl robotics team was founded in 2017 by Roya Mahboob, who is their coach, mentor, and sponsor, and also the founder of the Digital Citizen Fund.

Dean Kamen, an American engineer, inventor, and businessman known for his invention of the Segway and iBOT, was planning a 2017 competition in the United States and had recruited Mahboob to form a team from Afghanistan.

Out of 150 girls, 12 were selected for the first team. Before parts were sent by Kamen, they trained in the basement of the home of Mahboob’s parents, with scrap metal and without safety equipment under the guidance of their coach, Mahboob’s brother, Alireza Mehraban

The original six girls on the team became known as the “Afghan Dreamers” when they arrived in Washington, D.C. for the 2017 International Robotics Competition after facing long odds to gain entry into the United States.

They endured a 500-mile journey from their homes in Harat to an embassy in Kabul where they were twice denied visas and later had their robot kit confiscated by the Afghan government in the months before the competition. The team won the silver medal for “courageous achievement” at the competition.

During the coronavirus pandemic, the team worked on a low-cost ventilator using old car parts. The design, inspired by work on an emergency ventilator out of MIT, is low-tech so it can be replicated around the world with local products. For that contribution, the team made Forbes Asia’s 30 Under 30 list this year. The list honors trailblazers who exemplify determination, hard work, and innovation.

The Afghan all-girl robotics team is in no mood to pause their quest for higher studies and excellence, and the escape from the Taliban regime has boosted their morale. They have become symbols of women’s enlightenment in a country known for its oppressive militant atmosphere.

The leader of the team, Somaya Faruqi, who is just 18, said nothing would stop their quest for knowledge. Some girls have expressed a desire to continue their education in Canada, which spawned a Change.org petition calling for their safe resettlement there.

Even though they need to apply for citizenship, the team would like to take part in a robotics competition to be held in September. Some of them also plan to become entrepreneurs in the future.