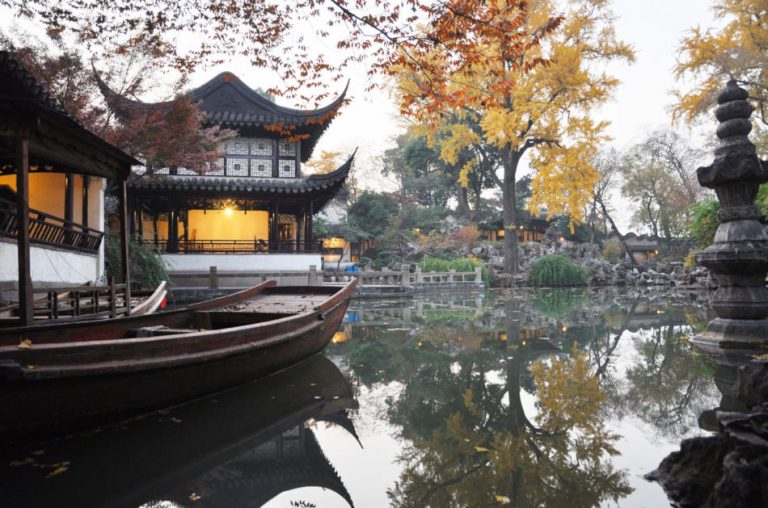 When Chen Xiao was young, he went fishing one day at a pond outside the city. (Image: Donkeyru via Dreamstime)

There is an old saying in China: “Up in heaven is paradise, down on earth are Suzhou and Hangzhou.” These two cities are famous for their enchanting scenery, with lakes, pavilions, well-designed gardens, and beautiful silk products. Nearby are many ancient water villages, where most of the buildings are centered around lakes, rivers, canals, or ponds.

7 of the most well-known water villages in China

Zhouzhuang lies between Lake Tai and Shanghai, and it was built in 1086. It is surrounded by water with traditional houses built on the waterways. Boats and decorated bridges add color to this small village.

Xitang has a unique style with its narrow stone streets and famous ceilinged corridors that attract many visitors. The family hotels are also special. Silk and handmade fans make good souvenirs.

Tongli is surrounded by five lakes, including Lake Tongli, which is connected by a network of canals fed from the confluence of three rivers. Most of the buildings here are situated along waterways, hence its nickname “Little Venice of the Orient.”

Luzhi lies west of Shanghai and has a history of 2,500 years with many relics. It is one of the best-preserved ancient water villages in the area, and visiting there is said to be like walking back in time.

Zhujiajiao is called the “Pearl of Shanghai.” You can take a boat through this ancient town to see some of its Ming and Qing Dynasty houses. If you only have a short time in Shanghai, Zhujiajiao is a great place to visit.

Mudu is over 2,500 years old, and it was built where a river was blocked by a large number of woods, hence its name, which means “woods block.” It is the only ancient garden village in China, and there are over 30 private gardens from the Ming and Qing dynasties.

Anchang was built in the Northern Song Dynasty, and it has well-preserved ancient houses from the Ming and Qing dynasties. As a typical water town, it is a romantic destination for weddings and honeymoons. Anchang was the hometown of Shaoxing private consultants and solicitors in the Qing Dynasty.