The Inspiring Story of Why 2 Japanese Olympians Combined Their Medals 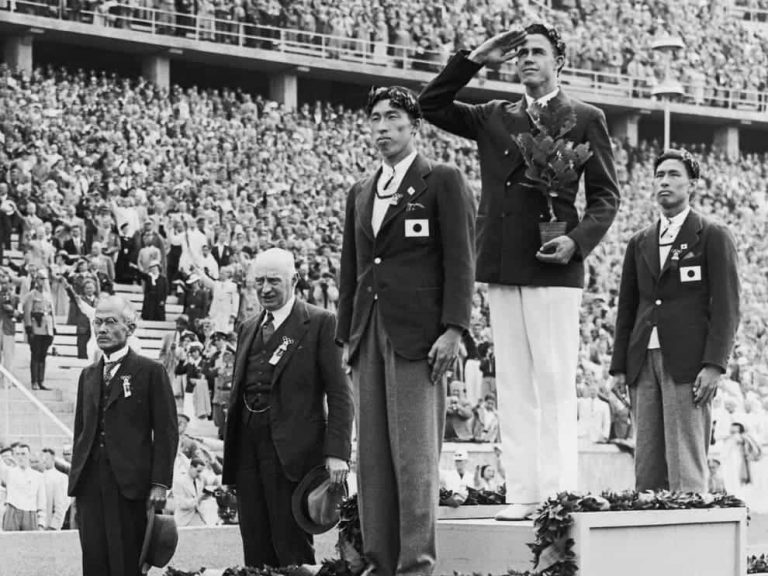 Shuhei Nishida (front) and Sueo Ōe during the medal ceremony at the Berlin Olympics. (Image: via Public Domain)

Winning an Olympic medal is a major achievement for any athlete and it is a matter of pride for his or her country. Yet the Olympic Games are not only about winning medals. Two Japanese Olympians, Shuhei Nishida and Sueo Ōe, were pole vaulters who shared their medals, blazing a path for Olympic humility and team spirit.

1936 Berlin Olympics remembered for many events

To outdo the 1932 Los Angeles Summer Games, Reich Chancellor Adolf Hitler had a new 100,000-seat track and field stadium built for the 1936 Berlin Summer Games, as well as six gymnasiums and other smaller arenas. The Games were the first to be televised, with radio broadcasts reaching 41 countries.

Hitler saw the 1936 Games as an opportunity to promote his government and ideals of racial supremacy and antisemitism, and the official Nazi Party paper, the Völkischer Beobachter, wrote in the strongest terms that Jews should not be allowed to participate. German Jewish athletes were barred or prevented from taking part in the Games by a variety of methods. Jewish athletes from other countries were said to have been sidelined to avoid offending the Nazi regime.

There were some inspiring developments. Jesse Owens of the United States won four gold medals in the sprint and long jump events and became the most successful athlete to compete in Berlin. The Olympics also made headlines for the incident when two Japanese Olympians combined their medals.

A pole vault result that nobody wanted

Shuhei Nishida and Sueo Ōe were members of the track and field team of Japan. At the final stage of the men’s pole vault, four athletes were competing for the gold medal. Earle Meadows, an American pole-vaulter with an amazing performance, already cleared the mighty vault of 4m 35cm; another American and two Japanese Olympians were still competing for the gold medal, but their attempts to reach the same height were unsuccessful.

The remaining three were left to battle it out for who would take silver and bronze. All three cleared 4m 25cm, so they had an extra vault as a tie-breaker. Sefton was unable to clear his bar, while both Nishida and Ōe did. The Japanese duo won, securing second and third place, respectively.

The competition seemed done and dusted until everyone realized there were no rules in place for which of the two would get what medal. Both cleared 4m 25cm, and neither was able to do what Meadows did, leaving them to have technically accomplished the exact same feat.

The Olympics Committee at the time did not have a rule in place to determine what would separate two athletes in such a rare situation. The two Japanese Olympians refused to compete in another jump-off; instead, they wanted to share the honors. When that was not allowed, the Japanese team came to a decision together after much deliberation that Nishida would take silver and Ōe bronze, as the former vaulted the 4m 25cm in his first attempt, while the latter needed two.

The creation of the ‘Medals of Friendship’

The medal ceremony went underway, but the two Japanese Olympians were not particularly happy with the situation, despite having medaled. They felt that each of them being allocated one medal was not representative of the situation at the Games, and as friends who had respect for one another, they took matters into their own hands.

When the two friends returned to Japan, they came up with a plan. They took their medals to a jeweler who cut them both in half. Then they joined half of the silver medal with half of the bronze medal, creating a half-silver, half-bronze medal for each of them. The medals became known as the “Medals of Friendship.”

The situation was definitely unique in that it had never happened prior to 1936, nor would it ever happen again due to the rule change after these events (it became official that the vaulter with the least attempts would place higher), which made the “Medals of Friendship” the only two of their kind. Ōe, who died fighting in World War II in 1941, kept his medal in private hands. However, Nishida’s, who died in 1997, had his medal held by his alma mater, Waseda University in Tokyo, where it remains to this day.