10 Gorgeous European Castles You Can Visit 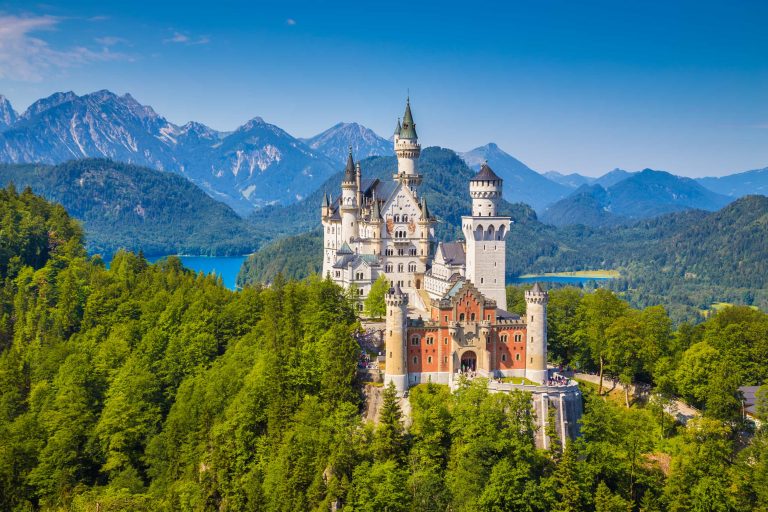 The setting is what sets the story in a specific time and place. It is the backdrop against which the action takes place. (Image: minnystock via Dreamstime)

Europe has a long history and you can find many European castles from a bygone time. Many of these are open to the public, so why don’t you add them to your travel itinerary?

10 European castles you can visit

Neuschwanstein is a fairy-tale retreat that inspired Disneyland’s Sleeping Beauty Castle. Enter a world of storybook fantasies at Neuschwanstein Castle in Southern Germany. Perched high upon a peak in the Bavarian mountains, it was built as a private retreat for the reclusive King Ludwig II. However, within seven weeks of his death in 1886, it was opened to the public and now attracts 1.4 million visitors a year to tour its perfect romanticism. Make sure to escape the crowds and spend time admiring its architecture from afar.

Mont Saint-Michel is an island fortress and monastery rising from the sea off France’s northern coast. As the tide goes out and the dark sands of Normandy’s coast reflect the sunlight, pilgrims make their way out to the ancient fortified monastery at Mont Saint-Michel. Technically, Mont Saint-Michel isn’t a castle, it’s a fort with an Abbey. It was built by monks after one of them had a dream featuring Archangel Gabriel.

When the tide rolls back in, the seas surrounding the 1,000-year-old walls cut off the island from the mainland. This inevitability, paired with the dramatic gothic architecture, draws millions of visitors each year. Take a nighttime tour in the summer with musical interludes and lighting effects.

Château de Chambord has French Renaissance architecture in a country setting. Combining French medieval forms with Renaissance styling and construction techniques, the Château de Chambord is one of the most recognizable buildings in France. King François I commissioned the magnificent retreat in 1519. Construction continued throughout his life to 1547, and technically it has never been completed. However, descending the Château’s double-helix staircase into the Grand Hall, it’s hard to imagine how it could be improved.

Prague Castle is the pride of Bohemia and the largest ancient castle in the world. It is the embodiment of European architectural history, housing the Gothic St. Vitus Cathedral, the Romanesque Basilica of St. George, and several palaces, gardens, and defense towers in Baroque and Renaissance styles. Most of the castle areas are open to tourists. However, it is still the region’s seat of power, serving as the office and residence of the President of the Czech Republic.

Stolzenfels Castle is an icon of the Upper Middle Rhine region. It is difficult to pinpoint a single castle to visit along Germany’s castle-lined Rhine River, but Schloss Stolzenfels stands out in the heart of the 65 km stretch now recognized as a UNESCO World Heritage site. Located near the town of Koblenz, and constructed in the 13th century, it had fallen into ruin before Prussian Crown Prince Frederick William revived it in 1823. A thorough revitalization was completed in 2011. There are no English-language tours, but the decorations are beautiful and the view of the river is unparalleled.

Château de Chillon is an architectural jewel overlooking the blue waters of Lake Geneva. Visit a castle so beautiful that it has inspired artists and writers for centuries, showing up in works by Lord Byron, Victor Hugo, Gustave Courbet, and others. The artistic tradition continues today with impressive rotating exhibits and guest speakers like George R.R. Martin, who spoke at the castle in 2014. Enjoy a glass of wine from the adjoining vineyard overlooking the lake.

Windsor Castle is the longest consecutively occupied palace in Europe and home to Queen Elizabeth II. It has been the home of 39 monarchs, and the Queen often spends her weekends in its art-filled halls. Located just outside London, Windsor is an easy and fascinating day trip. The State Apartments offer a glimpse into its changing styles of art and architecture dating back to its initial construction in the 11th century. Be sure to visit St. George’s Chapel, England’s greatest Gothic church, and treat yourself to a stroll down the Long Walk, a 3-mile tree-lined avenue that runs straight through the grounds.

At Hotel de la Cité, you can live like a king in an ancient walled city. This 5-star luxury hotel is in the ancient fortified city of Carcassonne, France. The history of the buildings goes back over 1,000 years, but the hotel was established just over 100 years ago. Lounge by the pool, surrounded by ivy-covered pillars and walls, or climb to the top floor to look out over the medieval town and the arched bridge leading away.

Alcázar is a fortress filled with centuries of art and artifacts. The spires of Alcázar rise from the craggy mountains of central Spain, their elegance surpassed only by the luxurious interior that offers visitors a tour through Spanish history. Originally an Arab fortress, the castle has been everything from an imperial residence to a prison and a college. The garden maze is a sight to behold from above, and be sure to visit the ancient aqueduct.

Alnwick Castle is a royal family home that served as the set of Harry Potter films. It has been home to the Percy family for over 700 years, but today it is perhaps best known as Hogwarts from the Harry Potter films. The Duke and Duchess of Northumberland still live here, but most of the buildings and grounds are open to the public. Make sure to check the castle’s website to see if there are events or film shoots scheduled during your visit.