Buddhist Monk Zhi Xiang Saved 8,000 Stray Dogs and Cats as an Expression of His Faith 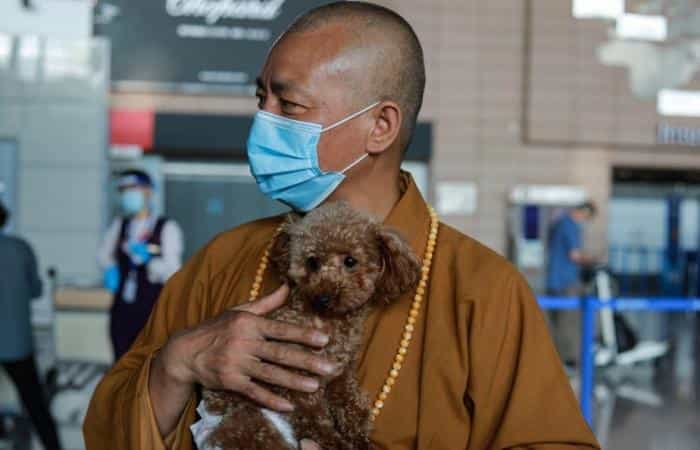 Zhi Xiang was used to animals, as he grew up on a farm where his family and neighbors had animals. (Image: ffr.littlemastersclub.orgvia Bao’en Temple)

Buddhism has a long tradition of including animals, including stray dogs and cats, as sentient beings when making decisions, which goes back to the very earliest days of Buddhism. Ashoka, the first Buddhist King of India, turned his thoughts to the behavior of a ruler. According to Ashoka, a ruler should protect all people, animals, and birds, so he protected animals, including dogs and birds, by ensuring their habitats were well maintained to survive well. Buddhist monk Zhi Xiang of China is also the living embodiment of this.

The sages of Chinese civilization encompassing Buddhism, Daoism, and Confucianism had a regard for the treatment and welfare of animals. Although Confucius only referred to animals twice in the Analects, this was because a learned or educated man (junzi) of the time was expected to treat animals morally and ethically and not make them suffer by engaging in unfair sporting activities or killing for fun.

So hearing that a Buddhist monk saved some animals in China, we would not be too surprised. However, we might be a bit taken aback to hear that the monk saved 8,000 stray dogs and cats. Here is the story of 52-year-old Buddhist monk Zhi Xiang, abbot of Bao’en Temple (报恩古寺) in Fengxian District, Shanghai, China.

Buddhist monk Zhi Xiang was used to animals as he grew up on a farm where his family and neighbors had animals. Once he became a Buddhist monk, Zhi started rescuing animals in 1994 after seeing a cat run over by a car. The experience moved him as the cat was injured but did not die. He started burying the dead animals that he noticed at the roadside. Zhi then moved on to rescuing stray dogs, which he took to the vets to neuter before letting them go. Eventually, he started caring for them at Bao’en Temple, where the collection of stray dogs, sick cats, and birds outgrew the limited space in the traditional monastery.

It turned out to be an expensive undertaking for the monk because, until January 15, 2017, he only accepted donations of food to feed the animals. By then, he had run out of money as the 5,000 stray dogs and cats at the new shelter in Dagang, Pudong, that Zhi rented in 2019 eat one ton of food per day. Zhi says he has never used the monastery money and borrows money from friends and family to keep his shelters going. His ethical behavior extends to making sure he cannot be seen to get kickbacks from using certain vets.

Zhi feels he cannot sit and pray when living beings are suffering, so he devotes his time to help save some of the many thousands of stray dogs and cats dumped since the explosion of pet ownership in the past few years fuelled by the new middle classes.

“In the beginning, I had a vague idea of what Buddhism means, but after a while, I felt it was not just about kneeling in front of a statue. A Buddhist needs to sacrifice something for living beings and society, “Zhi said.

Buddhist monk Zhi Xiang believes the ignorance surrounding the responsibility of pet ownership and meeting the needs of animals is down to a lack of animal welfare laws in China and the failure of owners to spay or neuter dogs and cats. Neutering is seen by many Chinese as something that will hurt their pets, the same reasoning behind a failed microchipping program started by the Chinese government some years ago.

“This is not caused by people who dislike dogs or by the government, but by so-called dog lovers who don’t have proper animal-caring knowledge,” said Buddhist monk Zhi Xiang

Many people give up their pets when they become a burden or seem hard to look after. There are an estimated 40,000 to 50,000 stray dogs in China, and the numbers are increasing every year. Many end up in the meat trade, die of neglect or injuries, or are captured by the police and euthanized.

An article that appeared in the print edition of the Shanghai Daily in 2015 reported: “Shanghai’s Liu Lang, vice president of the China Veterinary Association, estimates that his profession has neutered some 70,000 stray dogs in the past eight years… ‘The number of stray animals is growing, but the methods of curtailing their numbers are limited,’ said Xia Zhaofei, a professor at China Agricultural University. ‘This problem demands the attention of all governments, organizations, and the public at large.’”

A sad tail may have a happy ending

The story of Nue Nue, one of the dogs offered for rehoming to the U.S. or Europe, illustrates a common scenario. Nue Nue, a 5-year-old Shih Tzu, was rehomed by her pregnant owner with her mother. Unfortunately, the mother didn’t understand that Nue Nue needed to be let out to the toilet, and after some unfortunate accidents on the floor, the mother packed her into the car, drove far away, and left her on the side of the road.

Fortunately for Nue Nue, she was rescued by Zhi, who is hoping that a traveler going overseas can volunteer to fly her to her new home when the COVID-19 airline restrictions lift. The All Shih Tzu website states that “the average price of a Shih Tzu puppy in the United States is between US$750 to [sic] US$3,000.”

At the Public Stray Animal Control Centre Shanghai, Zhi receives animals that are given up and collects crates full of the many stray dogs and cats caught that day by the local police, giving them vaccinations and various medicines.

One stray dog has arrived tied up in a plastic bag within a sack. Buddhist monk Zhi Xiang asked the volunteer why they put the dog in the sack rather than in a cage. “The owner put it in there,” was the reply. A small white bedraggled dog emerged from the bag once it was untied.

The death of an animal seems to trouble Zhi. “All deaths are painful; there is no such thing as a good death, even if we call the procedure euthanasia. There is always suffering when life ends. That’s why we have to save these stray animals,” he told the South China Morning Post. Sadly, about one-third of the dogs that are rescued are too sick to survive. The ones that can make it are taken back to one of the shelters, while those who can still connect with humans are put up for overseas adoption.

Although uncomfortable about being in the limelight since the recent press interest in his story, Buddhist monk Zhi Xiang accepts it as part of the solution to raising funds to cover the cost of approximately 12 million yuan (US$2 million) per year to run his operation and buy 60 tonnes of dog and cat food a month.