Kwoneksamach, the Lake That Disappears Every Year 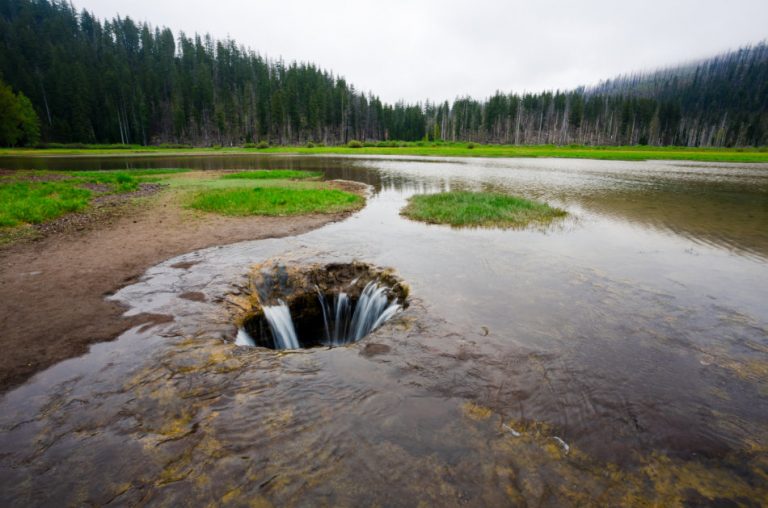 Every year, an entire lake just disappears. Native Americans in the Cascades region call this place Kwoneksamach, or “unknown.”

Up in the mountains of Oregon approximately two hours southeast of Portland is where this mysterious lake sits. The first documented accounts by European Americans said that they had found it difficult to find their way, so they named the lake “Lost Lake” in the 1870s.

The most mysterious thing about this lake is that once a year, it disappears.

Kwoneksamach drains through a lava tube

The Kwoneksamach lake drains through a lava tube and just disappears. No one knows where the tunnel leads, or where the water goes.

“It fills up in the winter, when input exceeds the rate of draining, and then it goes dry and it’s a meadow,” Jude McHugh, spokesman for the Willamette National Forest, told The Bulletin.

Lava tubes are formed during a volcanic eruption when the outside of a lava flow cools, but the lava flow in it is still hot and flowing beneath the surface. When the lava all flows out, it leaves a tunnel.

Lost Lake is emptied in the winter when the snowpack of Oregon’s mountains freezes, depriving the lake of its inflow. In the summer when the snow melts, it fills back up again.

Where does the water go once down the tube? No one knows, but it may seep into a giant aquifer beneath the surface of the Cascade Mountains, replenishing the groundwater.

So it would seem that the Kwoneksamach lava tube is serving an important purpose, in addition to being quite an interesting and bizarre little quirk of nature.

But for some reason, some people have insisted on plugging up this great bathtub drain, and they’ve been pretty creative about it, the Inquistr reported.

Willamette National Forest Spokeswoman Jude McHugh said the U.S. Forest Service has found car parts, engines, and more in the hole, which officials believe were put there to keep the lake from disappearing. Obviously, this is a bad idea, the Inquisitr pointed out.

“If anyone was ever successful at plugging it — which we’re not sure they could do — it would just result in flooding, and the road; it’s an important part of how the road was designed,” she said.