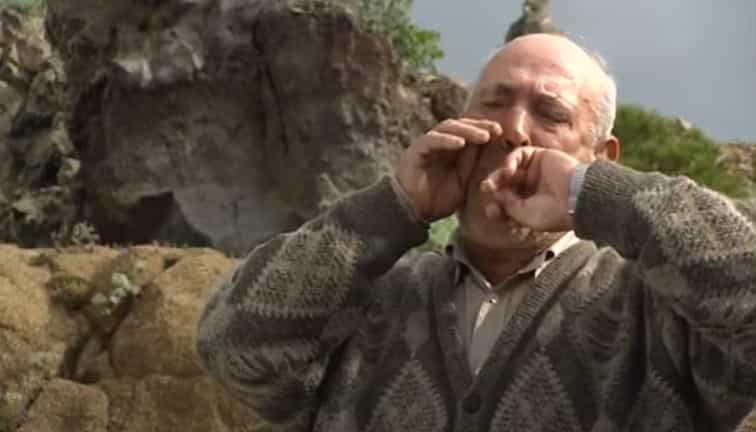 In the Canary Islands on the coast of West Africa, there are traditional cultures that still communicate in whistles. (Image: Screenshot via YouTube)

In the Canary Islands on the coast of western Africa, there are traditional cultures that still speak in whistles.

If you visit the islands of La Gomera and El Hierro in the Canary Islands, you may encounter a person whistling loudly, and just when you try to recall the tune, you will hear a returning whistle. Welcome to a world where inhabitants speak in whistles. This is a form of communication that comprises some 30 whistled languages known to researchers.

History of the whistle languages

The origin of languages is very interesting. But what sounds like a complicated form of vocal technique actually is really simple. The whistle language might sound difficult to comprehend, but the reality is that it is very easy to learn and the phonological techniques involved are just the development of the vocal cords with practice.

Ascertaining Charles Darwin’s claim that singing and whistling are a form of protolanguage, a researcher from the University of Grenoble, France, Julien Meyer, did extensive studying of whistled languages and hypothesize that whistling was a precursor to the spoken language.

In order to understand the reason behind traditional cultures that still speak in whistle, you need to understand the habitation and settlement of early nomadic humans. The earliest recorded history of a whistled language dates back to 400 BCE in Xenophon’s Anabasis.

In the book, the author mentions the technique of communication via whistling over great distances. This makes sense, as cultures that speak in whistles have been observed in areas where there is very dense vegetation or greater distances between settlements, such as ravines.

The language has actually developed naturally. People’s need to communicate over distances or to let others know their or someone else’s activities caused them to develop the language of the birds.

True to its depiction, the whistling language is often used to signal each other — like some coded sounds set for certain situations. To an uninitiated passerby, this might sound like casual whistling, but in reality, an entire conversation is taking place.

Watch this video of Kusköy, Turkey — the whistling village:

Where can you find cultures that still speak in whistles?

The traditional cultures that still speak in whistles are mostly found in places that have very hilly terrains or dense vegetation. Today, the domination of technology and text messaging threatens the extinction of this language. Still, there are some remote places where the whistle language still thrives. Here are some of the well-known and documented whistle languages from around the world:

1. The Silbo language from La Gomera

The origins of the whistle language can be pinpointed to North Africa, and more precisely, the Canary Islands. The Spaniards who landed in the Canary Islands soon gained knowledge of this language as the native population used it to monitor and warn of their activities. Later, the Silbo language was often used to warn against the Guardia Civil, which is Spain’s law enforcement agency. While the language started to fade in the late 1950s, it saw a revival in the 1990s.

2. The Bird Language from the village of Kuşköy

The Çanakçı district of Giresun is an area in the Northern Turkey mountains. The lone village of Kuşköy has held onto its whistled speech culture for centuries. Where once the bird language was the language of the entire mountain area, today shepherds are the primary users of this language.

3. The H’mong from the Himalayas

The Hmong are an ethnic group found in a village in the foothills of the Himalayas. The language of whistling was predominantly used to communicate during hunting excursions, but it was also used during courtships. Nowadays, the language is limited to a boy whistling a poem when he sees a girl he likes and if she replies, they date.