Is a Half-Truth More Cowardly Than a Lie? 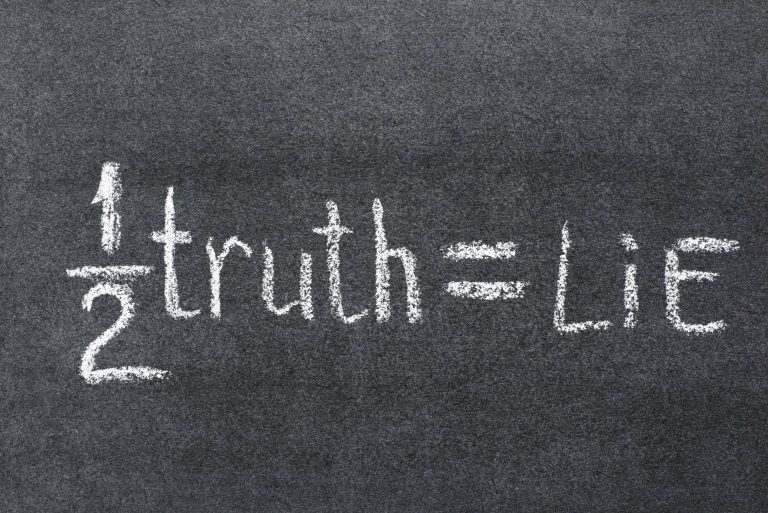 It does not take too much time for half-truths to become lies. (Image: Yuryz via Dreamstime)

“A half-truth is the most cowardly of lies.” – Mark Twain

With the onset of the digital revolution and various social media personalities and pages claiming to know the “truth,” it does not take too much time for half-truths to become lies.

We have come across many such instances where we know the full story and yet we listen to the half-truths spoken by an ignorant person and we simply sit and stare. Many political parties and celebrities resort to selling half-truths to the public for their personal gains. But what are half-truths?

The many faces of half-truths

As the name suggests, half-truths are statements that have a few elements of the truth but mostly to substantiate the lie that is the main subject of the statement. However, sometimes the statement might be totally true but that is part of a whole narrative. And when that true statement is presented out of context, it becomes a half-truth with the aim to deceive.

Take for example a conversation between two colleagues. Colleague 1 says something negative about their boss, but he also says a positive quality; however, colleague 2 neglects that part and takes the first negative statement further as a rumor.

Another example can be a national leader claiming progress to be recorded as highest during their tenure when, in reality, the progress has always been on the positive side even before their coming to power. In such instances, when the truth is twisted to fulfill personal agendas, are the nature and the harmful effects of such deceptive half-truths understood?

Why should half-truths be avoided?

Many times, half-truths are the choice of weapon for religious entities. They have a system of belief and in order to enforce their belief on others, they add some truthful and verified facts into their hypothetical scenarios. There is always a strong chance that half-truths will become lies and cause great harm to others.

The concept of truth is not subjective. But the perceptive part of “your truth” and “my truth” often gives rise to these half-truths. Nobody can deny the universal truths, but seeing something out of context and forming an opinion that is then spread verbally should be taken with some grains of salt.

A person driving somewhere sees another person drag a dog to a car. Since we humans have become wary of every scenario and conditioned to believe in the worst, we might assume animal cruelty. It can be true, or it can be a case of an ill dog being captured to be treated and made healthy. But chances are that the person driving will be inclined to believe in the former and this addition of their opinion to a scene will be the damaging part.

The benefits of telling the truth

Nothing is worse than the half-truths that are spoken with the intention of being merciful. You know that a certain person is a cheater, but your friend loves them very much. In order to keep peace in your friendship and not hurt your friend, you will end up saying nothing or you will just state half the scene. This might make you feel like a savior, but you simply have made the hurt that your friend will feel worse.

Truth always comes out. It is an ancient saying found in many cultures and we have, time and again, seen its validity. No matter how much it hurts the other person or how much it will hurt you, speaking the truth is the only way to go, and it will also be liberating. Lies tend to pile up and then a single forgetful moment on your part and everything becomes unraveled. With truth, you need not be careful. Honest people are also more likely to be taken seriously and at face value. Stating things at face value is also a great character certificate.