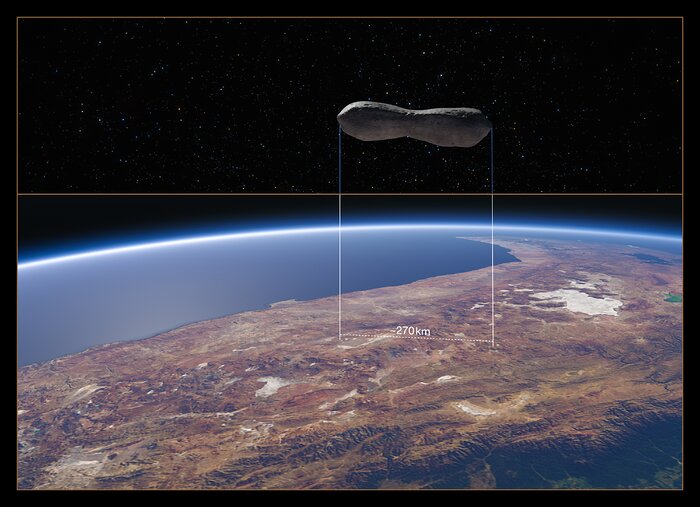 Using the European Southern Observatory’s Very Large Telescope (ESO’s VLT), a team of astronomers has obtained the sharpest and most detailed images yet of the Kleopatra asteroid. The observations have allowed the team to constrain the 3D shape and mass of this peculiar dog-bone asteroid to a higher accuracy than ever before. Their research provides clues as to how this asteroid and the two moons that orbit it formed.

“Kleopatra is truly a unique body in our Solar System,” says Franck Marchis, an astronomer at the SETI Institute in Mountain View, USA, and at the Laboratoire d’Astrophysique de Marseille, France, who led a study on the asteroid — which has moons and an unusual shape — published in Astronomy & Astrophysics, he added:

“Science makes a lot of progress thanks to the study of weird outliers. I think Kleopatra is one of those and understanding this complex, multiple asteroid system can help us learn more about our Solar System.”

Kleopatra asteroid is known as the ‘dog-bone asteroid’

The Kleopatra asteroid orbits the Sun in the Asteroid Belt between Mars and Jupiter. Astronomers have called it a “dog-bone asteroid” ever since radar observations around 20 years ago revealed it has two lobes connected by a thick “neck”. In 2008, Marchis and his colleagues discovered that the Kleopatra asteroid is orbited by two moons, named AlexHelios and CleoSelene, after the Egyptian queen’s children.

To find out more about the Kleopatra asteroid, Marchis and his team used snapshots of the asteroid taken at different times between 2017 and 2019 with the Spectro-Polarimetric High-contrast Exoplanet REsearch (SPHERE) instrument on ESO’s VLT. As the asteroid was rotating, they were able to view it from different angles and to create the most accurate 3D models of its shape to date. They constrained the asteroid’s dog-bone shape and its volume, finding one of the lobes to be larger than the other, and determined the length of the asteroid to be about 270 kilometers or about half the length of the English Channel.

In a second study, also published in Astronomy & Astrophysics and led by Miroslav Brož of Charles University in Prague, Czech Republic, the team reported how they used the SPHERE observations to find the correct orbits of the Kleopatra asteroid’s two moons. Previous studies had estimated the orbits, but the new observations with ESO’s VLT showed that the moons were not where the older data predicted them to be.

“This had to be resolved,” says Brož. “Because if the moons’ orbits were wrong, everything was wrong, including the mass of Kleopatra.” Thanks to the new observations and sophisticated modeling, the team managed to precisely describe how the Kleopatra asteroid’s gravity influences the moons’ movements and to determine the complex orbits of AlexHelios and CleoSelene. This allowed them to calculate the asteroid’s mass, finding it to be 35% lower than previous estimates.

Combining the new estimates for volume and mass, astronomers were able to calculate a new value for the density of the asteroid, which, at less than half the density of iron, turned out to be lower than previously thought [1]. The low density of the Kleopatra asteroid, which is believed to have a metallic composition, suggests that it has a porous structure and could be little more than a “pile of rubble”. This means it likely formed when material reaccumulated following a giant impact.

The Kleopatra asteroid’s rubble-pile structure and the way it rotates also give indications as to how its two moons could have formed. The asteroid rotates almost at a critical speed, the speed above which it would start to fall apart, and even small impacts may lift pebbles off its surface. Marchis and his team believe that those pebbles could subsequently have formed AlexHelios and CleoSelene, meaning that the asteroid has truly birthed its own moons.

The new images of the Kleopatra asteroid and the insights they provide are only possible thanks to one of the advanced adaptive optics systems in use on ESO’s VLT, which is located in the Atacama Desert in Chile. Adaptive optics help to correct for distortions caused by the Earth’s atmosphere which cause objects to appear blurred — the same effect that causes stars viewed from Earth to twinkle. Thanks to such corrections, SPHERE was able to image the asteroid — located 200 million kilometers away from Earth at its closest — even though its apparent size in the sky is equivalent to that of a golf ball about 40 kilometers away.

ESO’s upcoming Extremely Large Telescope (ELT), with its advanced adaptive optics systems, will be ideal for imaging distant asteroids such as the Kleopatra asteroid. “I can’t wait to point the ELT at Kleopatra, to see if there are more moons and refine their orbits to detect small changes,” adds Marchis.