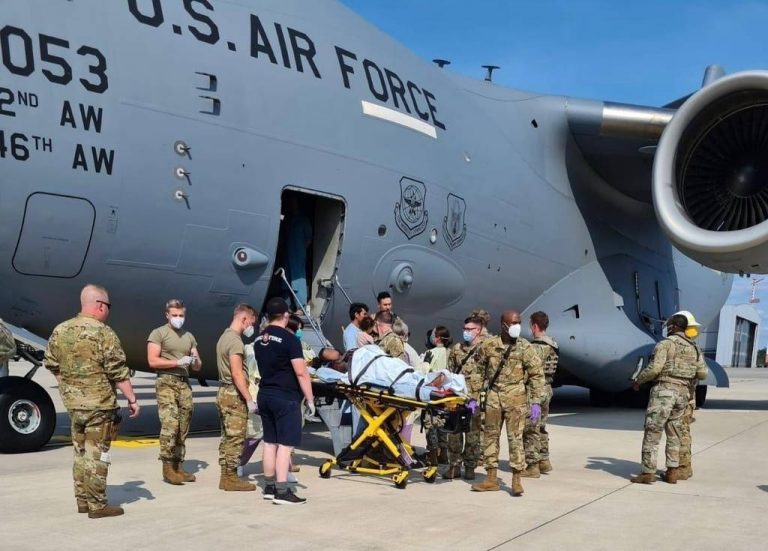 A pregnant Afghan woman gave birth to a baby girl in the cargo bay of an Air Force C-17 and named her daughter after the plane. (Image: Tech Sgt. Zachary Boyer / U.S. Air Force)

Amidst these trying times, certain stories of home and survival pop up and restore hope. One such story took place on the U.S. aircraft tasked for the Afghan airlift. The devastating news of Afghanistan has shaken the world. With the Taliban taking control, the future of the country remains uncertain. Add it to the ongoing pandemic and you have the perfect concoction for depression, especially for residents of Kabul.

Born in the cargo bay area of Reach 828, an Air Force C-17 aircraft, baby girl Reach brought joy and hope to everyone around her. The Afghan mother whose life was saved by the pilot’s quick thinking and the emergency medical team from the U.S. airbase in Germany honored her saviors by naming her daughter after the aircraft that carried them to safety.

The Afghan airlift of civilians

Since the Taliban took over, the U.S. has successfully evacuated 6,000 American citizens and over 1.2 million Afghan civilians during the Afghan airlift. U.S. forces have welcomed the Afghan refugees and have taken necessary steps for their well-being.

This is not the first time that the Taliban have come to power in Afghanistan. During their capturing the country in the 1990s, the Taliban enforced Sharia rule and followed an extreme interpretation of Islam that barred girls from getting an education and prevented women from working. Females who were found to be in violation of the Taliban’s laws faced public flogging and execution.

Amidst all the evacuation stories, the story of baby Reach surely stands out like a lotus in a pool of mud. The newborn baby’s family was fleeing the nation and was aboard the Globemaster C-17 flight named Reach 828. While onboard and in mid-flight, the Afghan woman went into labor. She was having complications due to low blood pressure.

Seeing the situation, the pilot of the flight decreased the altitude of the plane to help stabilize the expectant mother’s condition. The flight landed at Ramstein Air Force Base in Germany. A team of medical personnel from the 86th Medical Group immediately boarded the plane and carried the woman to the cargo area. The woman delivered her baby there within just a few minutes.

Another show of kindness and humanity was when the other evacuees surrounded the mother and used their scarves as shields to provide her with privacy during the delivery. Once the baby was safely delivered, the mother and child were shifted to a proper medical center. Reports of their good health have spread.

While it was an emotional moment for the family, Tod Wolters, Air Force General, stated that as an Air Force fighter pilot, he hopes to see Reach grow up as a U.S. citizen and one day become a pilot herself.

The family will be spending two weeks at the U.S. base in order to complete visa requirements prior to traveling to the United States for resettlement.