Does Standing Up at Your Computer Do Your Health a Favor? 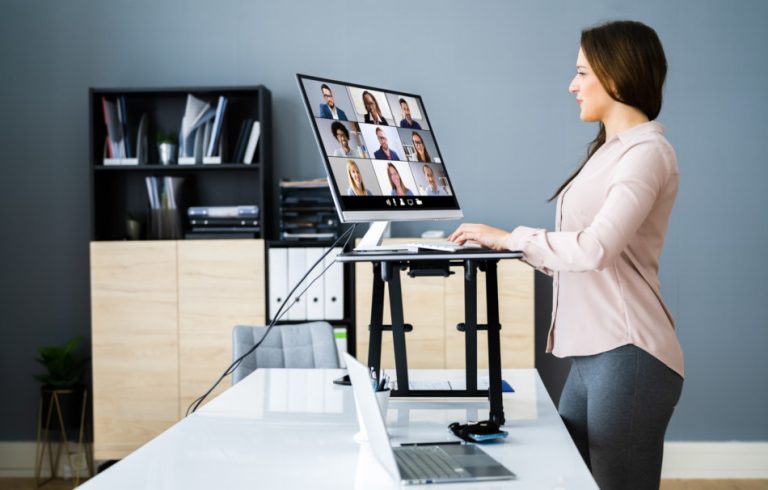 More and more people are standing up to their computers. (Image: Andrey Popov via Dreamstime)

More and more people are throwing the habit of slumping in front of their screens out of their office windows, and they are now standing up at their computers. I have also been standing up at my computer during the last few days. And I survived.

The response I mostly got was: “Oh yes, I’ve seen this before. So and so does that because of his back problems.” At first, I felt a bit uneasy “standing out” there — but the moment passed when I considered what I’ve been reading about standing versus sitting.

Standing up vs sitting at your computer

Our collective average sitting time varies according to what study you read, but on office days, we probably sit for well over 10 hours.

Just think about it: How much time do you spend sitting down to eat, commute, compute, eat, watch television or games, or compute again… Enough is enough, right?

And cutting down on office sitting hours seemed easier to accomplish than standing up at the dinner table (although the kids would love this of course), or in my car commuting!

These historic thinkers, writers, leaders, and inventors didn’t sit too much at work. They stood upright.

Compared with sitting for great lengths of time, standing up and taking a little walk burns more calories, and allows more oxygen to feed your muscles and brain (yeah — boosting productivity, memory…)

And that’s not all. Sitting less will make you improve your health, and make you less prone to diabetes, sciatica, depression, heart attacks, obesity, disabilities, and yes, even cancer, according to WebMD.

For me, personally, in my little experiment, I managed to find other ways to slump against my desk while standing up behind my computer. It decreased the time spent slumping, however, because it’s hard to slump in plain view.

So instead of slumping, I left my screen to get someone a drink or interrupt a colleague’s concentration over a small matter I could have put in a short email. It’s a bit soon to write firm conclusions about the social impact of it all, but I’ll keep the experiment up a while longer to see what happens.

Actually, anything might happen; treadmill desks (excluding the hamster apparently) or cycling desks…? The latter can be borrowed for a month for free where I come from in the Netherlands.

Maybe we could have a cycling desk in our meeting spaces to add a bit of liveliness to the discussion. The cycler would give a new definition to the expression: