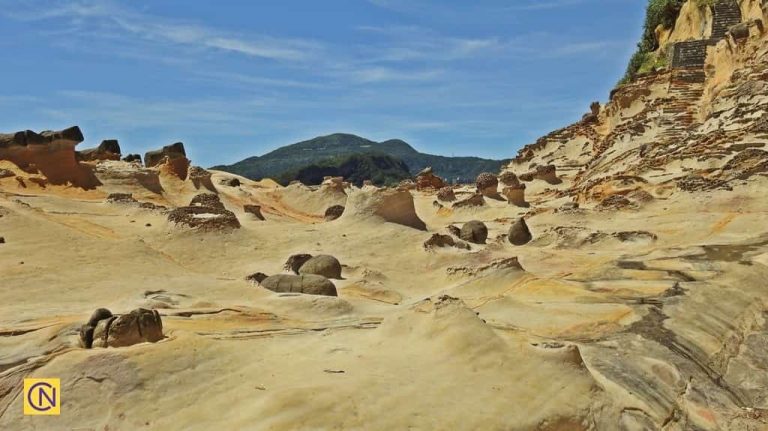 Yehliu Geopark, located in New Taipei City’s Wanli District in northern Taiwan, is an internationally renowned tourist attraction featuring oddly shaped rock formations. It is the first site on the northern coast that is transformed and run according to UNESCO’s concept of the Global Geopark.

Yehliu Geopark was voted number one among the nation’s top 10 natural landscapes in an online poll conducted by Taiwan’s Forestry Bureau in 2013. It was followed by Taiwan’s highest peak, Yushan, and central Taiwan’s landmark Sun Moon Lake.

With stunning landscapes and wondrous rock formations, Yehliu is a must-see destination for foreign visitors. It was in fact the second most popular attraction among tourists from mainland China before the COVID-19 lockdown. After 70 days of closure, Yehliu Geopark reopened on August 17, 2021.

Formed by the collision between two tectonic giants, the Philippine Sea Plate and the Eurasian Plate, about four million years ago, Yehliu Geopark is a narrow cape approximately 1.7 kilo­meters (1 mile) long and 250 meters (820 feet) wide. With a total area of some 23.8 hectares (58.8 acres), this unique cape is also called “Yehliu Turtle,” as it oddly stretches into the Pacific Ocean like a giant turtle.

Since the cape is situated in a humid subtropical region, it is under the influence of northeast monsoons and wave erosion for almost six months of the year. With the persistent erosion, weathering, and earth movements, the limestone and calcium carbonate rocks take on unusual shapes, while the surfaces are full of amazing seawater-eroded trenches, holes, and fossils.

With its particular scenery and striking rock formations, the cape was designated as Taiwan’s first-ever geopark in 2003. In fact, Yehliu Geopark is a “living geology classroom,” and has received acclaim from geologists as well as tourists from around the world.

Nearest to the mainland, this section is accessible by wide, comfortable boardwalks. Though it is referred to as the Mushroom Rock Formation area, besides many mushroom-like mounds, there are many other notable rocks and fossils, including the well-known Cute Princess Rock, Ice Cream Rocks, Candle Rocks, Ginger Rocks, Honeycombed Rocks, and urchin fossils.

This section is where the iconic Queen’s Head is located. The 4,000-year-old rock takes its name for its resemblance to the famous bust of ancient Egyptian Queen Nefertiti or England’s Queen Elizabeth I.

Queen’s Head is also an unofficial emblem for the New Taipei City’s Wanli District, where the Geopark is located. One of the most unusual features of this rock is its slender neck. As its thinnest part now measures merely about 124.6 centimeters (49 inches), experts warned that the rock is likely to topple within the next decade if no effective actions are taken.

To protect Queen’s Head, the geopark has deployed a staffer to keep visitors off the rock and test out a special coating to slow the rate of erosion.

Covering approximately 80 percent of Yehliu Geopark’s total land area, this section is referred to as the Queen’s Secret Garden. It is the Geopark’s major ecological reserve and is home to a stunning array of rock formations, sea caves, and unparalleled views of Taiwan’s north coast.

One of the most striking formations in this section is the so-called “Twenty-four Filial Piety Hill” (The Twenty-four Filial Exemplars Mountain), where a total of 24 protruding rocks are located below the Yehliu Cape. The name was given by a group of tourists based on a classic text of Confucian filial piety written by Guo Jujing (郭居敬) during the Yuan Dynasty.

After being closed over the past decades for safety reasons, the section was reopened in September 2021. Nevertheless, it is only open with guided tours, and advance reservations are needed. This section is especially suitable for geological study and field research.

Another majestic section of Yehliu Geopark is Camel Hill. Although it is about 0.5 km (0.3 miles) away from Yehliu Peninsula and is separated by a parking lot and a fishing harbor, it is still part of Yehliu Geopark, and visitors can appreciate a wide array of amazing rock formations with spectacular textures and the beautiful coast.