Retribution: For Destroying a Bodhisattva Image, 3 Generations Were Punished 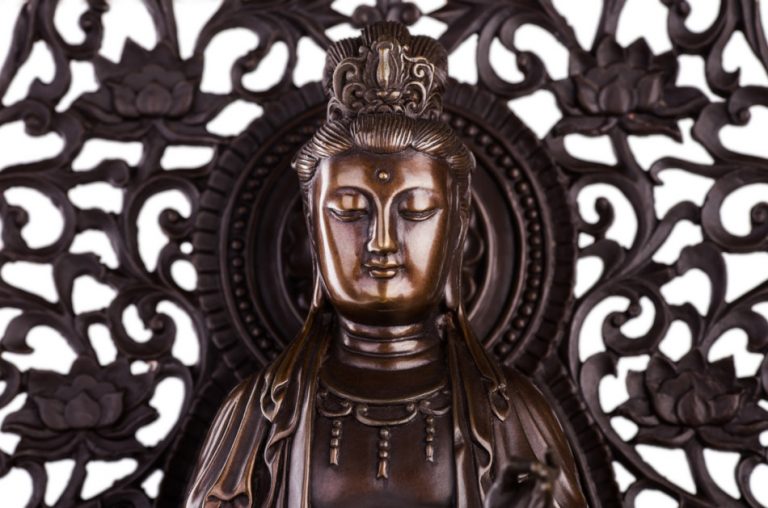 After a man destroyed a Bodhisattva statue and used the pieces to block a water outlet, every member of his family suffered. (Image: Denys Hedrovych via Dreamstime)

Here is a true story of karmic retribution. It happened in a small village in Hunan Province, China, in the 1950s. The people involved were the five members of He Kejian’s three generations of family, which was well off before 1949, but later was given the hereditary family class label of “middle peasant,” the second-to-the-lowest class assigned by the communist government.

After the Chinese Communist Party founded the government, He Kejian joined the volunteer army in 1950 and, after retiring in 1954, returned home to make a living as a farmer. When he got back to his family, he imparted his pro-Communist education of atheism to them. In addition, He Kejian tried to demonstrate himself as superior in the so-called breaking down of the “Four Olds” and “superstition.” These were labeled by the communists as “Class Enemies.”

The Four Olds were the ways of thinking and culture existing in traditional Chinese culture prior to the establishment of the Chinese Communist Party. They were known as Old Ideas (Jiù Sīxiǎng 旧思想), Old Culture (Jiù Wénhuà 旧文化), Old Habits (Jiù Fēngsú 旧风俗), and Old Customs (Jiù Xíguàn 旧习惯).

At the time, the volunteer brigade dubbed him as a militia captain. However, regardless of being such a minor “officer,” the team specifically provided him with a big knife to stop the “harm” being caused by the “Class Enemies,” and He Kejian carried it with him every day.

In 1954, Dongting Lake flooded. He Kejian was responsible for flood control in the organization. One day in June, He walked to Zhongheyuan while investigating the drainage way and saw an Earth God temple. After entering the temple, he found an Earth God statue inside. He thought: “Isn’t it a superstitious object? How can this kind of thing be left!” So he immediately took out the knife, split the statue into two pieces, and used it as mud to block the water outlet on the ridge.

Many villagers went to see what had happened and said it was impossible for such a thing to occur. They criticized He Kejian for destroying the Bodhisattva image, advising him never to do it again. But He Kejian casually said: “Of course it’s possible. Haven’t I already done it? I don’t care whether it is a Bodhisattva statue or not.”

From that point on, He Kejian’s family had no peace. They received karmic retribution one after another. First, there was always the clanging sound of a big knife at night in his house. Then, after six months, his mother went blind. The following year, his wife died by hanging herself for no reason. (At the time, the county’s public security bureau also performed an autopsy and investigated for several days, but they found no reason behind it.) A few years later, both He Kejian and his only son went blind in one eye. Finally, in 1966, his father died.

All worldly phenomena arise from a combination of causes and conditions. Nothing happens without reason. Good and evil payback all have reasons behind them, and all follow the relationships of cause and effect. This karmic retribution story of destroying a Buddhist statue shows that atheism, which the Chinese Communist Party has enthusiastically promoted, causes infinite harm to people.

The principle that good and evil will be rewarded has never changed since ancient times. When doing evil, atheists fear nothing and no one. But when repaying with misery, not only will they suffer, but they will bring harm to their descendants through karmic retribution.