The Fascinating Origins of the Pillow 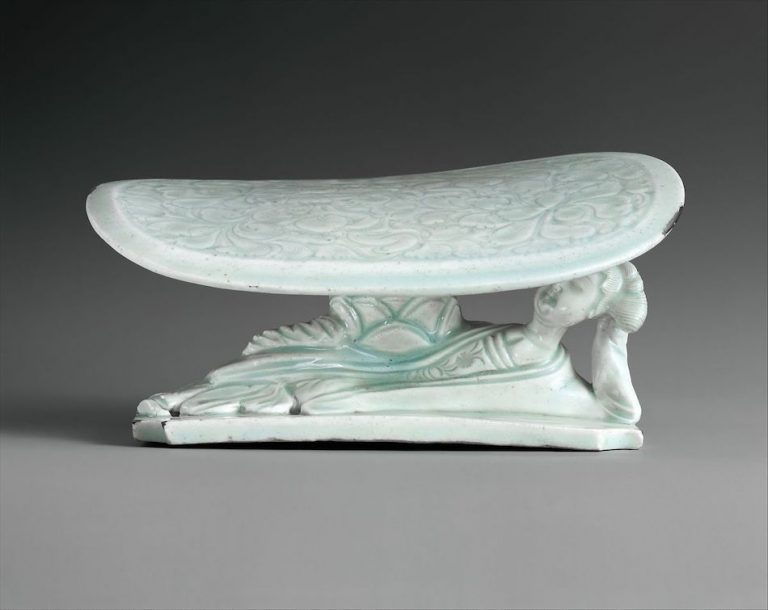 For much of human history, pillows had a much grander role than just cradling sleeping heads. (Image: via Public Domain)

“We are such stuff as dreams are made on; and our little life is rounded with a sleep.” — William Shakespeare, “The Tempest”

The origins of the pillow are quite fascinating. While the pillow may seem to be a simple concept and a common item that we take for granted, it hasn’t always been the soft, fluffy nighttime companion we’re accustomed to today. In fact, what ancient societies used for a pillow would give most of us pause.

Origins of the pillow

The first pillow is believed to have originated in ancient Mesopotamia (today’s Iraq) around the year 7,000 B.C., making the pillow about 9,000 years old.

This pillow was made of stone and was used not for comfort or support, but rather for purely utilitarian purposes. It raised the head off the ground to help keep insects and other critters from climbing into a person’s hair, mouth, ears, and nose.

With time, ancient civilizations came to believe that the pillow could also provide support for the head. Stone was thought to be the best way to provide support, and so continued to be used for this reason. Stone was also immune to insects and bugs, unlike various softer materials. But carved stone was expensive, which meant that only the wealthy could afford to own a purpose-built pillow. As such, the pillow came to be viewed as a status symbol in ancient times.

More is probably known about the use of the pillow in ancient China than in any other culture.

The hard pillow maintained its popularity in ancient China. While the people of ancient China had the knowledge and ability to create a soft pillow, most looked down on it, believing a soft pillow robbed the body of its essential energy and vitality.

The hard pillow was believed to have a variety of other benefits. It served to not only support the head and neck, but also helped to maintain the complex hairstyles of the time while sleeping, increase blood circulation, and improve one’s intellect. According to renowned auction house Christie’s, the ancient Chinese pillow also was used to keep one cool while sleeping. “Poet Zhang Lei of the Northern Song Dynasty wrote: ‘Pillow made by Gong is strong and blue; an old friend gave it to me to beat the heat; it cools down the room like a breeze; keeping my head cool while I sleep.’”

A variety of materials were used to make pillows in ancient China, including porcelain, jade, pottery, bamboo, wood, and bronze. It was said that the material a person rested their head upon would influence their health, therefore, one should choose wisely.

Perhaps no material was more popular for pillow making in ancient China than ceramic. According to Christie’s, ceramic reached the height of its popularity during the Tang (A.D. 618–907) and Song (A.D. 960–1279) dynasties, before eventually being replaced by Western-style stuffed pillows. These pillows were often ornately shaped and decorated, and just like in Mesopotamia, were reserved for the wealthy and viewed as a symbol of status and prosperity. Butterflies, flowers, and children at play were just a few of the auspicious images commonly used on pillows, while inscriptions of Buddhist, Daoist, or Confucius teachings were often put on pillows to help improve one’s moral character.

The hard pillow was also said to ward off evil spirits, something the soft pillow couldn’t do. The lion, tiger, and Chinese dragon, in particular, were said to be effective at keeping evil spirits away.

“Lions were regarded as auspicious creatures with sufficient ferocity, strength, and spiritual energy to ward off evil spirits,” according to Christie’s. Many pillows were either made in the shape of these animals or bore images of them.

While the hard pillow was viewed most favorably, there were pillows made of other materials for use in special circumstances. One such pillow was the medicinal pillow. According to Taiwan Today, this pillow was made of various herbs wrapped in silk cloth; it was used to improve hearing, keep the eyes sharp, return gray hair to its original color, regrow lost teeth, and cure a variety of diseases.

Due to its close proximity to the head, the pillow was also said to help promote and guide dreams. The ancient Chinese believed dreams had significant meaning, and they were taken as omens of what was to come.

“There was no sharp dichotomy in the division between the two states of spirit and matter in Chinese popular thought,” according to the Victoria and Albert Museum in London. “Ghosts, spirits, and visions in dreams were part of the material world and deemed to be interchangeable with life. Thus the pillow could be a material object of great importance, which mediated between the conscious and unconscious, between reality and the illusionary.”

Today, these beautifully created ancient pillows are sought by collectors, fetching prices in the tens of thousands of dollars.

With the advent of the Industrial Revolution, people’s ways of life began to change across much of the world.

As technology continued to evolve, so did the story of the pillow. With the mass production capabilities of the Industrial Revolution and the increase in the availability of cotton, the pillow was no longer only for the elite. The average person could now afford to own one, and the pillow gradually became common in every home.

As the Industrial Revolution brought material prosperity, society followed the pattern of the ancient Greeks and Romans: People sought out more comfort, ultimately ushering in a revolution of the soft pillow.

While the comforts of modern-day pillows may make our nights more comfortable, perhaps the ancients were onto something. I’m not inclined toward a return to a stone or ceramic pillow (though you can make your own version), but perhaps we should remember that sometimes a little discomfort in life isn’t such a bad thing.

From the perspective of the ancient Chinese, seeking comfort is rarely the best path. After all, when we endure a little hardship, we become more resilient. And amid life’s turmoils, if we can look within for the lesson, we’ll come out the better for having gone through it.

It seems even the pillow has a lesson to teach us.