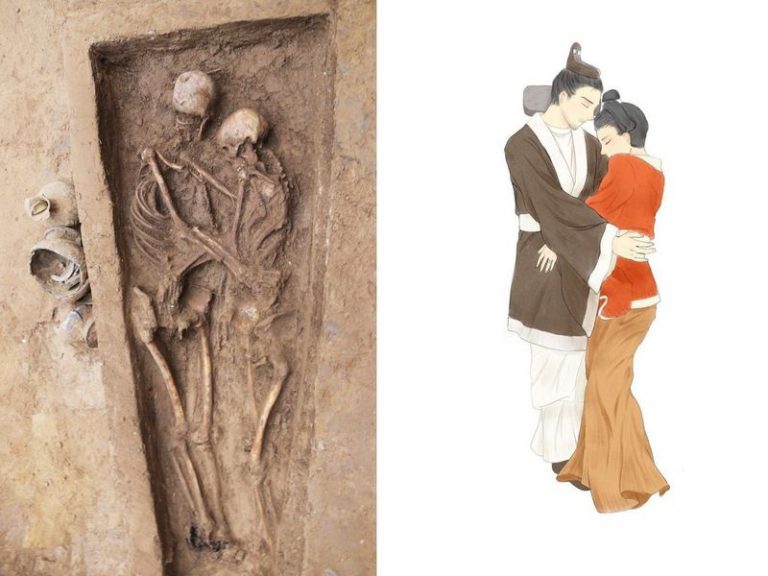 The couple's skeletons (left) and an artist's rendition of the pair (right) (Image: Zhang via 'International Journal of Osteoarchaeology')

The recent unearthing of a 1,500-year-old burial site in China exposed the skeletons of a couple locked in an embrace.

Adages like ‘till death do us apart’ are part of our emotions and we make this promise to our loved ones. But there have been certain couples who did not let even death keep them apart. An example of such love has been unearthed by archeologists in the city of Datong in Shanxi province.

The couple’s skeleton was found locked in an embrace of tender love and while the faces have long been gone, a look at the embraced skeletons will give you a sense of love and peace that true love brings.

The story of the two skeletons

Burials of love must be abundant. However, evidence of direct materialization of love in burials (such as Taj Mahal) has been rare, and rarer in skeletal forms.

Stories of Romeo and Juliet, Laila and Majnu, or Heer and Ranjha are popular and these tragic love stories depict an eternal love that is achieved as the lovers are killed or commit suicide to stay together as spirits. The couple found by archeologists does symbolize a similar story of a Chinese couple.

Researchers found the skeletons while excavating more than 600 tombs at a cemetery uncovered during construction in the city of Datong, in Shanxi province. The bones are dated to be 1,500 years old. This sets the couple to be alive during the North Wei Dynasty living in Northern China at that time. The couple could have belonged to the Xianbei tribe. The scene that was unearthed is simple — a couple lying embraced in a position that is not usually a rule with burials.

The skeletons were found holding each other, with the woman having her head resting on the man’s chest and the man leaning his head on the woman’s head. This is an unusual position because cultures where burials are customary to have certain rules with regard to the position of the body of the departed. This was a way to symbolize the person’s character when alive.

The unusual burial of the couple hints at a love that transcended all other feelings. But on closer inspection and further studies that were conducted, many facets about the embraced couple have come out.

The findings of archaeologists

During a construction project in Shanxi Province, a cemetery was unearthed and a team of archeologists was working on properly unmasking some 600 tombs. Within one such tomb, they found the skeletons of this embraced couple. Physical evidence suggested the woman was donning a silver ring on her left hand. While this might possibly not indicate marriage, the lack of other adornments and personal belongings often buried with the deceased do indicate that the woman chose to have that ring on her at the time of her death.

Coming to the analysis of the bones, the man would have been around 29 to 35 years of age and does bear signs of physical trauma on his body in the form of unhealed wounds. He also had his right hand’s ring finger missing. The woman was completely unharmed and she was placed at 35 to 40 years at the time of her death. The signs of violence on the man’s body do lead romantics to believe that maybe the couple was China’s Romeo and Juliet, but how they ended up in the same grave and in that position is not explained by this theory. But one thing is clear, which is that the woman might possibly have sacrificed herself to be with her eternal love.

Another theory put forth by researchers states that the man and the woman belonged to a tribe living during the Northern Wei Dynasty era. The custom of joint burials of couples was not unheard of then. And during the Northern Wei Dynasty, Buddhism was becoming prevalent in China. But the tribes of the northern China region were often at war with the Chinese rulers during that era. But this form of burial does highlight the impact of Buddhism on both cultures. Researchers also highlight that this possible acceptance of love and the display of such in a grave might have certain Western influences, as trade had commenced through the Silk Road.