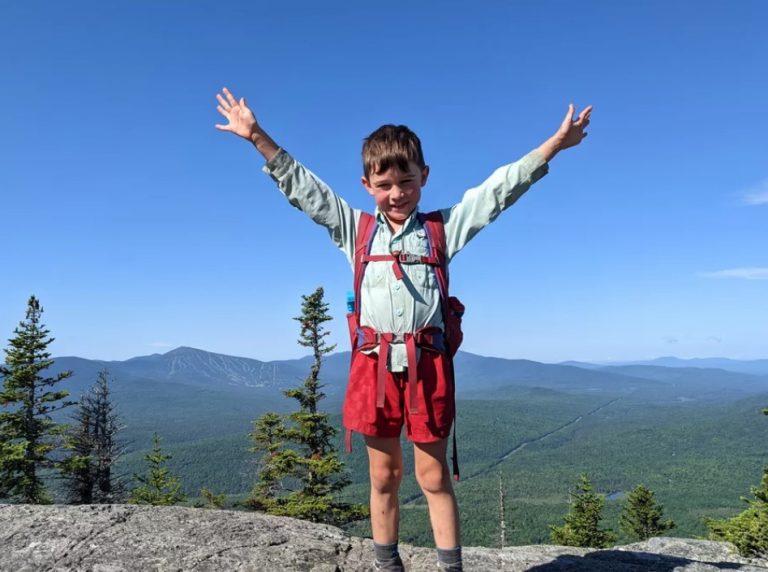 Five-year-old Harvey Sutton raises his arms while hiking the Appalachian Trail with his parents. (Image: via Josh Sutton)

Some parents may have had trouble getting their kids away from electronics and outside this summer. But for one Virginia family, this wasn’t the case. Josh and Cassie Sutton recently completed a full-length hike of the Appalachian Trail with their son, Harvey.

At just 5 years old, Harvey, who earned the nickname “Little Man” from fellow hikers, is one of the youngest people known to have completed the roughly 2,100-mile Appalachian Trail that stretches across 14 states. The Suttons covered the hike from Georgia to Maine in 209 days. Their journey began in January when Harvey was just 4 years old. He turned 5 before the family completed the hike last week in Maine.

It is somewhat unusual to find such a young boy getting into such activities and enjoying them too. However, 5-year-old Harvey says it never seemed too tedious for him. He enjoyed munching on treats like peanut butter tortillas. The wildlife, including frogs and lizards found along the way, also kept him engaged and he did not get bored, according to the youngster.

His mother Cassie Sutton said the experience helped them bond in a new way. As a family, the Suttons became used to life on the Appalachian Trail. They woke up every day just before 6 a.m. to pack their sleeping bags, tents, and gear to begin hiking all day.

“I think a lot of people are surprised at how well he did. They’re like: ‘How did you get your 5-year-old to do that because my 5-year-old won’t even walk half a mile without complaining?'” Cassie said. “Everyone is pretty amazed and astounded.”

Training for the Appalachian Trail began at a young age

When Harvey was 2 years old, his parents began training him for hiking by going on mini walks. They slowly increased their mileage day by day — eventually gearing him up for his big adventure.

“It started out as a joke and we decided maybe that could be our mini-retirement and hike the Appalachian Trail with Harvey. We started training him at a young age to hike and camp and he took on to it really well,” said Harvey’s dad, Josh Sutton

The hike was pleasant except for one snowstorm that compelled them to stop for a couple of days. They became habituated to sleeping in tents and waking up early in the morning. Karl Donus Sakas, a fellow hiker who accompanied the Sutton family, said Harvey is very energetic.

The key was keeping his imagination engaged

Harvey’s mom and dad said their focus was on keeping his imagination engaged. When they hiked, Harvey made grand plans about hosting a lava party, making spaceships, setting up homes, etc. Other fellow hikers gave Harvey toys to keep him motivated.

Josh Sutton said on this: “We learned that he is fabulous at hiking, but as long as we’re playing make-believe and pretend with him all day long, then he moves quickly and hikes a lot faster than a lot of us imagine.”

Part of a select group

Harvey is several months younger than “Buddy Backpacker,” a boy who held the record for youngest to complete the Appalachian Trail in 2013, Harvey’s parents say.

But the youngest of all may be Juniper Netteburg, who finished the Appalachian Trail at age 4, wearing a Wonder Woman costume, with her parents and three siblings on Oct. 13, 2020, said her parents, who are missionary doctors.

Her family hiked sections over a period of months, but that still counts as long as they didn’t skip any part of the trail, said Ken Bunning, president of Appalachian Long Distance Hikers Association.

While the Suttons have plans for more hikes and family adventures ahead, the family is getting adjusted to life at home again as Harvey begins his latest adventure: kindergarten.

“Hopefully after going hiking for 10 hours a day to sitting in the classroom, he’ll do OK,” Josh Sutton said.