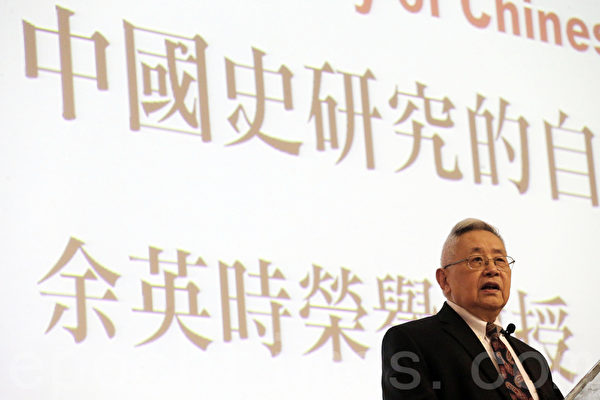 Renowned scholar of Chinese history, Mr. Yu Yingshi, had a profound understanding of the nature of the Chinese Communist Party. (Image: Xu Cuiling via The Epoch Times)

Mr. Yu Yingshi, the renowned scholar of Chinese history in the 21st century, passed away on August 1 at 91.

As a master historian, Yu Yingshi’s most notable legacy was his extraordinary academic achievements, his profound understanding of the nature of the Chinese Communist Party (CCP), and his anti-CCP stance.

Yu Yingshi was a well-known life-long anti-communist and never changed his viewpoint.

Before his death, Yu Yingshi was interviewed by the media several times. The most representative one was the interview at his Princeton residence on August 17, 2013. Yu Yingshi talked about his perspectives on the “Chinese dream” and China’s prospects and incisively criticized China’s current system. But he firmly believed that the Chinese traditional culture would not disappear and would return to mainstream society one day.

In light of Yu Yingshi’s recent passing, sharing his wisdom is the best way to pay tribute to him.

Highlights of the interview with Yu Yingshi in 2013

Question: It seems that “China’s rise” has become a typical view for people in China and overseas in recent years. Based on your observation, is China rising? How should people view China’s current state?

Answer: I don’t think China has risen. The CCP regime cannot last long and must reform its political system. Mainland China’s extreme disparity between the rich and the poor is severe. Hundreds of millions of people around the coasts became rich because of their close ties to the Communist officials, who are either family members or relatives, as the Chinese saying describes it: “Keeping the fertile water within the family field.” And yet, countless corrupted government officials have sent their spouses and offspring abroad along with their massive wealth. If they had confidence in the regime, they would not have done so.

The CCP’s budget for maintaining stability has surpassed military spending in recent years. Can such a society last?

Question: You said you were not optimistic about Xi Jinping’s “Chinese dream.” Are you confident about Xi’s competency as a leader? What’s the biggest challenge for the Xi-Li regime?

Answer: Many people have high expectations for Xi-Li’s administration. In fact, what can we expect? They are meaningless words. A survey was conducted with thousands of people, and the results show that 70 to 80 percent of the interviewees did not acknowledge the CCP’s legitimacy in power. Initially, the regime anticipated a favorable response, but quite the contrary. So, they left the survey result sealed; but, some information leaked and was published by HK Magazine, which exposed a significant problem — no one has any confidence in the CCP.

Corruption among government officials is common in China, which leads to many wealthy people fleeing to other countries. Some stay in China to work but own multiple passports and are ready to escape any moment.  This phenomenon symbolizes that they have no confidence in the CCP, and there is no dream to keep them staying and working in China. In today’s China, the upper echelon has become a hereditary system. A group of 108 Princelings possess trillions and control 168 state-owned enterprises.

On the other hand, tens of thousands of corrupt officials escape from China every year, taking a large sum of money overseas. Many were apprehended, yet it only represents a small fraction. Do these people acknowledge the Chinese dream? If they don’t even believe in these empty words, how great can society be? Some overseas Chinese may believe in the Chinese dream because of nationalist sentiment, but those who understand the CCP’s reality may not agree.

Question: Then, what’s your “Chinese dream?”

Answer: I have no “Chinese dream.” I have a human dream. My “dream” is for everyone to be safe, free to do what they want and say what they want. This is my dream society. I don’t need China to be superior to everyone else in the world. Nationalist sentiment is Chinese people’s vanity, which is the only way to be taken advantage of by the CCP. Nationalism should only be used in foreign invasion to unite the Chinese people to resist foreign aggression.

Question: You pursue the universal core values, including freedom, democracy, and human rights. With China’s rise and your age, the CCP has attempted to persuade you to return to China by all means possible. Although you publicly criticized the CCP’s policies, most of your works have been published in China. Do you still insist on not going back to China?

Answer: The United States gives me the greatest freedom. Living in a free world, I don’t ask others to have the same views as mine. Even if they did, I would not feel particularly delighted. Everyone is entitled to have their own opinions and perspectives.

Question: Why do you insist on anti-communism? Are you still optimistic about China’s future?

Answer: I have formed my views since I was 19 years old. I am not pessimistic about China’s prospects. Chinese traditional culture will not disappear, as it has been deeply rooted in society — the old customs, such as worshiping ancestors and the fellow villagers association — and Chinese people’s gentle nature, honesty, and human touch will come back gradually so that the Chinese will have a normal life again in the future. Today, there are too many struggles in society, especially the CCP’s emphasis on class struggles. But, I believe the CCP will not exist forever, and Chinese traditional culture will return to mainstream society someday.

Lastly, I want to quote a passage from Mr. Yang Huaikang at the end of this short article. “Looking forward to the future, Mr. Yu is optimistic. His optimism is rooted in Chinese culture, which is as resilient as quagmire and quicksand. Eventually, this culture will submerge the CCP which will collapse in the quicksand.”

Translated by Joseph Wu and edited by Angela M