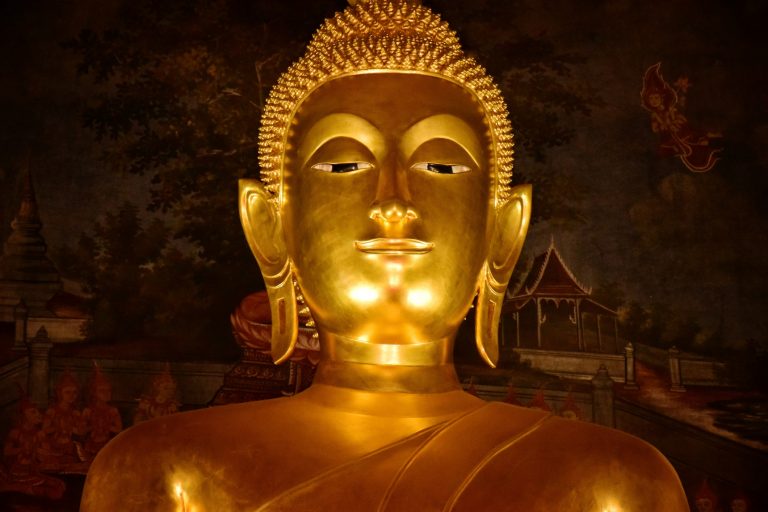 Yan Tong started by persuading people to donate money to cast Buddha statues, telling them that giving more money was an accumulation of great merit. (Image: Tosoongnern via Dreamstime)

Even a monk can suffer retribution. During the Northern and Southern Dynasties, there was a monk called Yan Tong in Northern Qi. Although he was a monk, he was unable to achieve the Four Great Emptiness, and in the end, he did not really want to practice. In fact, Yan Tong loved money as though his life depended on it, and he tried to accumulate money, especially by taking advantage of people’s belief in Buddhist rituals to make them pay.

A scheme to make money

Yan Tong started by persuading people to donate money to cast Buddha statues, telling them that giving more money was an accumulation of great merit. People believed in God and Buddha, so there was a steady stream of people donating money. Later, when he had accumulated a vast amount of money, Yan Tong took some of it and used it to cast a large bronze statue of Buddha.

When the people saw that the donated money had made a statue, they were even more convinced by Yan Tong’s words. Then Yan Tong called people to come and worship the Buddha statue, donating money and fervently saying that this was an accumulation of even more outstanding merit. So many people would save their own money and then donate it to worship the Buddha and make a wish.

But some asked for a son, some for blessings to make them rich, some for healing. Whenever Yan Tong saw a benefactor who had given more money, Monk Yan Tong always took the time to praise the benefactor for his sincerity and wished him the blessings of the Buddha. However, deep inside, Yan Tong was happy that his dream of becoming rich was about to come true. Yan Tong secretly kept all the money for himself, and as well as spending it lavishly himself, he sent the remainder back home every time to hoard it.

His evil deeds were finally discovered, and slowly people came to know the true nature of Yan Tong and his sordid soul, and fewer and fewer people came to donate money. Later on, it became almost common knowledge that no one went to the shop, so of course, Yan Tong got nothing, which made him so angry that his eyes burned.

He was so angry that his eyes were burning with anger, and he became so mad with rage that he found a big stick and raised it viciously to hit the Buddha statue. Before the stick fell, Yan Tong’s mouth was full of resentment and vicious curses, blaming the statue for not bringing him money as it had done before.

It was too late to say anything. At the very moment when the deranged monk was about to drop the stick, a golden-armored God suddenly appeared and stood in front of Yan Tong. This golden-armored God was two meters tall; his golden helmet and precious armor shone so brightly that one dared not look straight at him, and he held a long staff.

Looking at Yan Tong angrily, he said in a loud voice: “You scoundrel and scum, how can you desecrate the statue of Buddha in such a way? You deserve to die!” As soon as the words were spoken, the divine being lifted Yan Tong up by his neck, and then used the iron staff to beat him violently, leaving Yan Tong bleeding and bruised.

Yan Tong pleaded loudly for forgiveness, so loudly that he could be heard both inside and outside the room. The people, both monks, and laymen, who came to see the scene marveled at the justice of the gods. When Yan Tong was beaten and bruised, the deity threw him to the ground and disappeared into thin air as the crowd watched. It was indeed a divine moment that came and went as it pleased!

After the golden-armored god beat Yan Tong, not only did his sores not heal, but they also festered. Finally, the sores were as big as apples, overflowing with pus and red and swollen as if burned by fire. Yan Tong wailed day and night, pus and blood spilling out everywhere, and it took him more than a hundred days of suffering before he slowly died.

Incredibly, as Yan Tong was dying, the house he was living in sank several feet into the ground. The crowds were discussing that the sinking of the land was probably a sign that this scum had gone to hell to continue suffering. He had received due retribution for his deeds.

The Buddha’s compassion and majesty go hand in hand. Stories of retribution show that the degree of blasphemy against the Gods and Buddhas varies, and so does the retribution.

On the other hand, when people do evil deeds and receive retribution, they are punished and educated, and are a warning to future generations that they must not do evil, that they must cherish their rare lives and do more good deeds to gain more blessings.