How Planets May Be Seeded With the Chemicals Necessary for Life 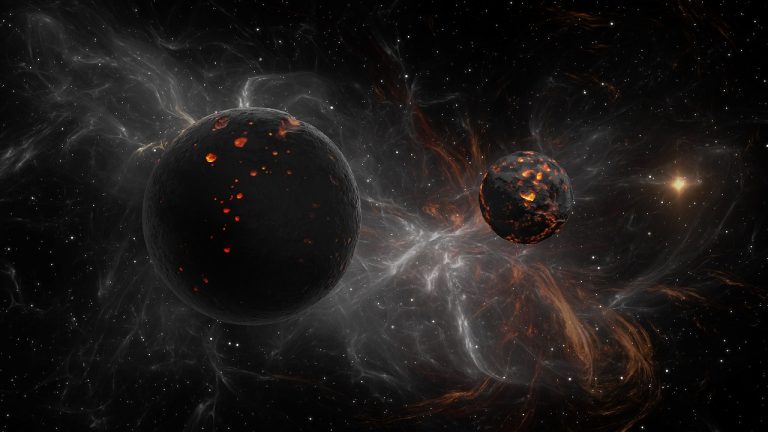 Analysis of unique “fingerprints” in light emitted from material surrounding young stars has revealed “significant reservoirs” of large organic molecules necessary to form the basis of life. Dr. John Ilee, Research Fellow at the University of Leeds who led the study, says the findings suggest that the basic chemical conditions that resulted in life on Earth could exist more widely across the Galaxy.

The large organic molecules were identified in protoplanetary disks circling newly formed stars. A similar disk would have once surrounded the young Sun, forming the planets that now make up our Solar System. The presence of the molecules is significant because they are “stepping-stones” between simpler carbon-based molecules such as carbon monoxide, found in abundance in space, and more complex molecules that are required to create and sustain life.

Details of the study are published in the Astrophysical Journal Supplement Series. It is one of 20 papers reporting on a major international investigation into the chemistry of planet formation. Dr. Ilee and his team, comprising astrophysicists from 16 universities across the world, focused on studying the existence, location, and abundance of the precursor molecules needed for life to form. Dr. Ilee said:

“These large complex organic molecules are found in various environments throughout space. Laboratory and theoretical studies have suggested that these molecules are the ‘raw ingredients’ for building molecules that are essential components in biological chemistry on Earth, creating sugars, amino acids and even the components of ribonucleic acid (RNA) under the right conditions.

“However, many of the environments where we find these complex organic molecules are pretty far removed from where and when we think planets form. We wanted to understand more about where exactly, and how much of, these molecules were present in the birthplaces of planets — the protoplanetary disks.”

Observing chemistry deep in space that leads to life

The investigation has been made possible by advances in the ability of the ALMA telescope to detect very faint signals from the molecules in the coldest regions of outer space. Each molecule emits light at distinctly different wavelengths producing a unique spectral “fingerprint.” These fingerprints allow scientists to identify the presence of the molecules and investigate their properties.

Dr. Catherine Walsh, also from the School of Physics and Astronomy at Leeds, was one of the five co-principal investigators leading the study. Called the “Molecules with ALMA at Planet-forming Scales” (or MAPS) program, it has used data collected by the Atacama Large Millimetre/submillimetre Array (or ALMA) radio telescope in Chile. Dr. Walsh explained:

“The power of ALMA has allowed us to measure the distribution and composition of material that is actively building planets around nearby young stars for the first time. The telescope is powerful enough to do this even for large complex molecules that are the precursors for life.”

The research team was looking for three molecules — cyanoacetylene (HC3N), acetonitrile (CH3CN), and cyclopropenylidene (c-C3H2) — in five protoplanetary disks, known as IM Lup, GM Aur, AS 209, HD 163296, and MWC 480. The protoplanetary disks range between 300 and 500 light-years from Earth. All of the disks show signatures of ongoing planet formation occurring within them.

This study is beginning to answer that question. It found the molecules in four out of the five disks observed. In addition, the abundance of the molecules was greater than the scientists had expected. Dr. Ilee said:

“ALMA has allowed us to look for these molecules in the innermost regions of these disks, on size scales similar to our Solar System, for the first time. Our analysis shows that the molecules are primarily located in these inner regions with abundances between 10 and 100 times higher than models had predicted.”

Importantly, the disk regions in which the molecules were located are also where asteroids and comets form. Dr. Ilee says it is possible a process akin to that which may have helped to initiate life on Earth could also happen in these disks — where bombardment by asteroids and comets transfers the large organic molecules to the newly formed planets. Dr. Walsh added:

“The key result of this work shows that the same ingredients needed for seeding life on our planet are also found around other stars. It is possible that the molecules that are needed to kick-start life on planets are readily available in all planet-forming environments.”

One of the next questions the researchers want to investigate is whether even more complex molecules exist in the protoplanetary disks, Dr. Ilee added:

“If we are finding molecules like these in such large abundances, our current understanding of interstellar chemistry suggests that even more complex molecules should also be observable.

“We’re hoping to use ALMA to search for the next stepping stones of chemical complexity in these disks.  If we detect them, then we’ll be even closer to understanding how the raw ingredients of life can be assembled around other stars.”

Provided by: University of Leeds [Note: Materials may be edited for content and length.]