Denmark’s Human Library: You Borrow a Person and Learn to Unjudge Them 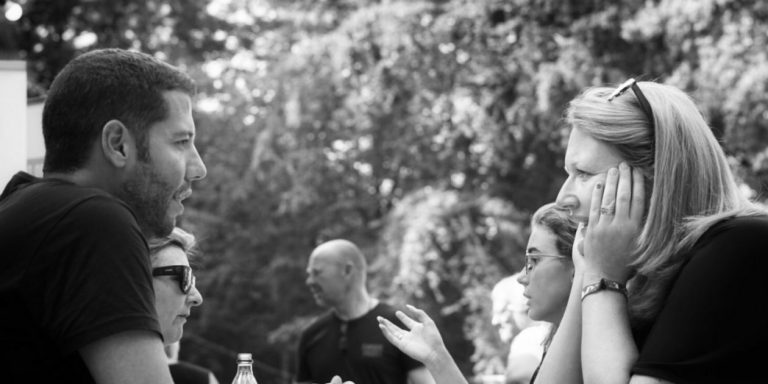 In the Human Library, one can find people volunteering as ‘books.’ They interact with human readers through conversations for 30 minutes. (Image: via Human Library Organization)

When a library is mentioned, it brings up the image of a building with thousands of books and serious-faced staff ensuring an atmosphere of silence. That is how libraries are meant to function, in most parts of the world. However, Denmark’s Human Library is a totally different concept.

In Denmark’s Human Library, you can find people volunteering as ‘books’. They interact with human readers through conversations for 30 minutes. The Human Library Organisation functions as a not-for-profit organization.

People play the role of books and they are asked questions by the readers. This helps in combating prejudice and encourages open communication. The topics can be varied including ethnicity, sexual orientation, and genetic disorders.

On its website, the Human Library is described as “in the true sense of the word, a library of people. We host events where readers can borrow human beings serving as open books and have conversations they would not normally have access to. Every human book from our bookshelf represents a group in our society that is often subjected to prejudice, stigmatization, or discrimination because of their lifestyle, diagnosis, belief, disability, social status, ethnic origin, etc.”

The origins of the Human Library project can be traced back to 2000. A local music festival was taking place at the time and the participants were asked to borrow a person, thinking of him/her like an open book. Over 50 people were accessed by the participants and they included a policeman, a journalist, football club fans, and a parking officer. The project was experimental then and was quite successful.

Ronni Abergel, the founder says the purpose of the project is not to judge or ask anyone to alter their mindset. They want the readers to make better-informed decisions.

The Human Library can be held in any location but it opened its permanent book depot in the capital city of Copenhagen, Denmark. The location is ideal for both the librarians and readers. If you are thinking if the human library was affected by the Covid 19 pandemic, the answer is yes. It now functions through Facebook Live readings. This facilitates readers in larger groups to connect online.

It is possible to be associated with the Human Library in a couple of ways. One can volunteer to play the role of a human book where it is necessary to have in-depth first-hand knowledge of identity and/or experience. The books are titled in simple ways such as Depression, Bipolar, and Alcoholic. The volunteer books agree to tell their experiences and this needs empathy and patience. One may also get involved with Denmark’s Human Library in the capacity of a reader in which you have 30 minutes to check out a human book before returning them to the library.

One unique aspect of the Human Library is the readers can find detailed answers to queries they always wanted to ask but did not know whom to approach. However, since the books are human, there can be differences among the books with similar titles. The Human Library Organization now arranges pop-up events across the world and in some cities, they offer permanent borrowing locations.

Inspired by the success of the human library, similar projects have been executed in several European countries. They are called Living Libraries and were set up by the Council of Europe in 2003. These unique enlightenment projects help to reduce age-old prejudice and fixed mindsets in people, albeit slowly and gradually.