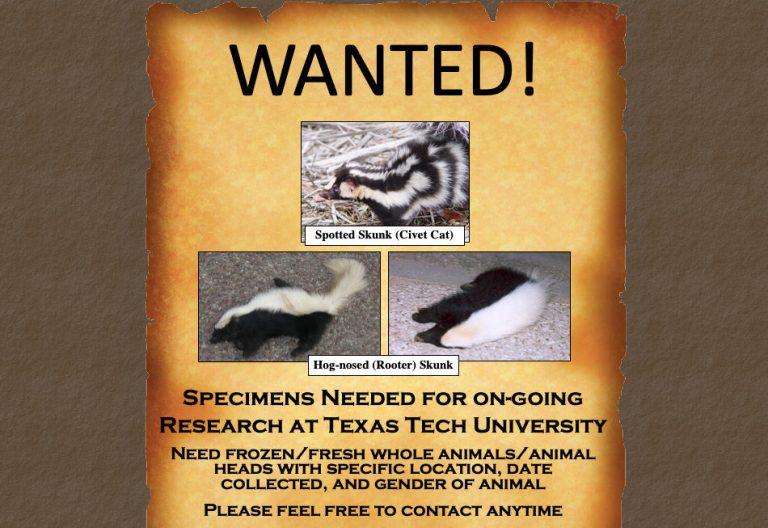 Scientists used Old West-style 'Wanted' posters to get the public to help them obtain specimens for their research. (Image: Adam Ferguson)

When you think of skunks, you probably get an image of black and white stripes. What you may not realize is that the skunks we are all used to seeing have a spotted “cousin.” Since most people go out of their way to avoid the stinky varmints, a group of scientists interested in the genetic diversity of spotted skunks had to come up with a clever way to get people to help them obtain specimens for their research. They used Old West-style “Wanted” posters.

The team, co-led by Adam Ferguson, faced some hurdles in doing their research. Trapping skunks isn’t easy, and after making six trips to Mexico, they still hadn’t caught a single one. That was when Ferguson realized they might need to get some help from the public. However, Ferguson told wildlife.org: “It’s harder to convince people to collect skunks than other animals. They literally stink.”

Ferguson and his team came up with the idea of using “Wanted” posters, which they distributed among the ranchers and trappers in Texas. The posters explained why they were needed and asked that people contact the team, who would then come to pick up any spotted skunks they had trapped or found as roadkill.

While all species of skunks are known for their noxious spray, the spotted skunk takes a unique approach to fend off predators. You’ll see them hop up onto their front legs and put their tails up in the air. “They do the handstand as a warning to basically remind you — as if the black and white coloration wasn’t enough — that: ‘I have this weapon. I’m not afraid to use it. Leave me alone,” Ferguson told the CBC.

Spotted skunks take this acrobatic posture to appear larger than they actually are. They may even walk toward the predator, looking all big and scary. If that isn’t enough to convince the predator not to mess with them, they drop back down on all fours and take aim before spraying their foul-smelling liquid.

Spotted skunks tend to be rather elusive. They are nocturnal creatures that spend their daytime hours hidden away in densely forested areas, which offer them protection from their main predator, the great horned owl.

According to Ferguson: “They’re kind of sneaky, and so it’s not that they’re necessarily rare. They’re just rarely encountered unless you learn about their behavior and where to find them.” (CBC)

Since they are so hard to spot, it has also made them hard to study. Spotted skunks were first discovered in 1758, and since then, scientists have been trying to determine just how many species exist. Through their research, Ferguson and his team members realized there are more species of spotted skunks than previously believed. The number had been set at four, but according to their findings, there are actually seven.

One of the newly designated species, the Plains spotted skunk, has been undergoing a decline in population for the last century. Conservationists have been petitioning for it to be listed as an endangered species for some time, but up until now, it was considered to be a subspecies of the Eastern spotted skunk, making it ineligible. Now, thanks to Ferguson’s research, it has been given the status of a distinct and separate species, which should make it easier to get protection under the Endangered Species Act in the U.S.

Because they help disperse seeds and eat harmful insects, rats, and snakes, while also serving as an important source of prey for larger predators, Ferguson believes people should make it a priority to protect all skunks. “Skunks are valuable to us as a species in terms of their ecosystem services and contributions. And then there’s also, I would say, the intrinsic argument that, you know, all lifeforms have the intrinsic right to life and to live and evolve and respond to the environment.” (CBC)