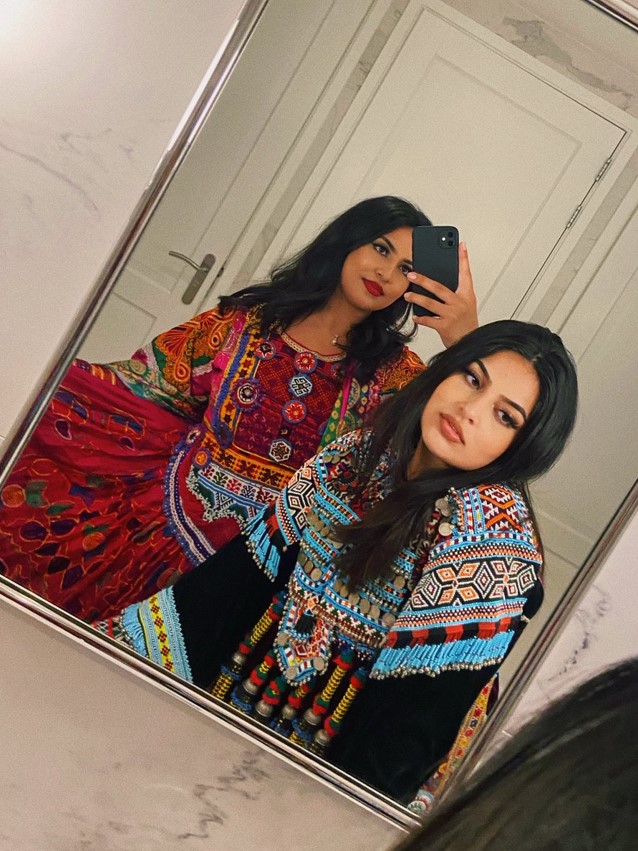 Afghan women have highlighted how diverse women's clothing traditions are in the country. (Image: via Twitter)

The Taliban’s return to power has ignited widespread fear that Afghan women will be forced out of the professional and educational spaces they occupied before the American withdrawal. The latest worrying order from Taliban leadership decreed that female university students be separated from men and “observe hijab according to [the Taliban’s interpretation of] Sharia” law. In response to this mandate, Afghan women around the world have taken to Twitter to share images of their traditional, colorful clothing in protest of the Taliban telling women what to wear.

The diverse culture of Afghanistan

Many ethnic groups and tribes form the backbone of Afghanistan, like Tajiks, Pashtun, Hazaras, etc., and each group has its own culture and dressing style. But what all of them have in common is the abundance of colors when it comes to women’s clothes.

The colorful clothes with their intricate geometric patterns were mostly handwoven and worn on special occasions. Their clothes are conservative and loose-fitting and this rule is applicable to both men and women. Nobody should show more skin than required. But in Kabul, this rule is not always strictly followed. Many men and women don Western clothes and wear attire that does show some skin.

With the Taliban taking over Afghanistan for the second time, there was a visible fear among every Afghan citizen, especially the women. The Taliban’s version of Sharia law dictates that women should wear a burkha that covers every bit of the body, except the eyes, and that it should be in black. While the Taliban had not specifically mentioned the color when they mentioned “Islamic dress,” a pro-Taliban rally at Kabul University saw women wearing just that.

While Afghanistan is considered to be predominantly Islamic, history shows that the dress code followed by Afghan women is not akin to those seen in many Persian Gulf countries. Traditional Afghan clothes are colorful and have geometric patterns. The fabric is light and breathable given the temperatures in Afghanistan. To demonstrate the same, ex-media advisor of the state Kahkashan Koofi posted a picture of herself wearing a colorful dress with a shawl around her head. Note that it is not a hijab, but a shawl. This was in response to the image of pro-Taliban people wearing all black burkhas and being completely covered up and it went viral.

Following the initial posts, many images of Afghan women from around the world donning traditional dresses went viral. They all took up the Twitter hashtag #DoNotTouchMyClothes started by Dr. Bahar Jalali, who was a former history professor at the American University in Afghanistan.

Dr. Jalali told the BBC channel that traditional afghan clothes are colorful and they are not too strict about having the head covered. She also stresses the point that they have no issues with what the supporters of Talibani rules wear. But she has an issue with how that image is being made to represent the culture of Afghanistan. He also highlights the fact that clothes should be the choice of the wearer and that choice is taken away by the Taliban.

When Afghanistan was under the rule of the Taliban in the 1990s, the women were kept almost under lockdown. They faced severe restrictions. This time around, the Taliban has promised to be more “tolerant and lenient,” but the removal of women from any position of power and imposing these clothes rules says a different story.

The need to let the world know what Afghanistan is all about is the reason behind these colorful pictures. All the women who have shared pictures of themselves wearing traditional Afghan clothes or what their mothers and other female relatives wore is a bid to let the world know that conservative dressing is not the same as a total cover-up. The picture of Afghanistan that the Taliban has painted needs to be changed and these women are aiming to do just that.