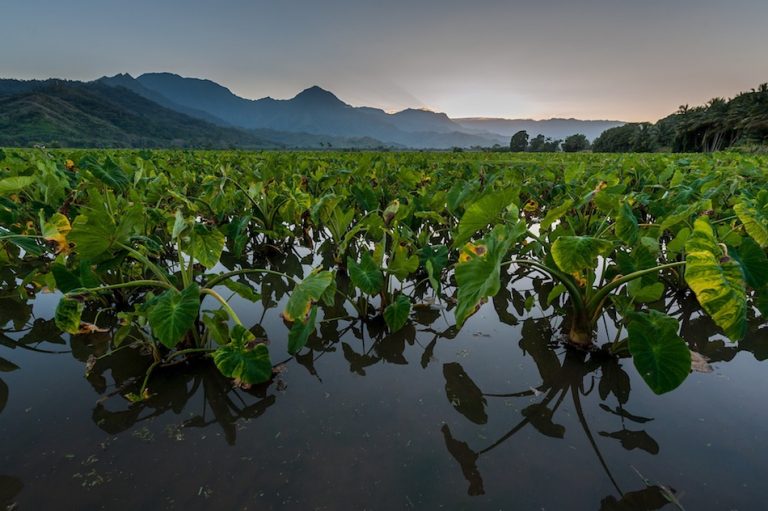 The Taro plant plantation in Hawaii at sunset. (Image: sergei akulich via Pixabay)

The edible taro is a corm that is cut from the Colocasia esculenta plant. Its root system stores its nutrients inside a thick swollen part of the root. This section is chopped, peeled, then cooked and added to a meal. The word esculenta is the Latin word for edible. Captain Cook found the Colocasia growing in New Zealand and it is believed that he named the corm taro, which is a word derived from the Maori language. The plant is also commonly known as Elephant Ears and it has many other names in many different countries.

Taro is grown throughout most parts of the world and thrives in moist tropical environments. It is one of the first types of plants to be cultivated and was introduced to many countries to be grown as a food or as an exotic plant. An archaeological study in the Solomon Islands has shown evidence of its utilization for 28,000 years. Where it has been introduced in some parts of America and Australia, it has overgrown its welcome and is thought of as a weed.

In Hawaii, the taro plant is known as kalo and it is a significant part of their religion and culture. The Hawaiian people tell a story about the earliest of times when the world was mystical. The creation of taro began with the Earth Mother, Papahanaumoku, and the Sky Father, Wakea. The two are of high divine rank and they married.

Together, the two united and became the symbol of the land and the sky or you could say heaven and earth. They made and formed the Islands of Hawaii. Afterward, Papahanaumoku gave birth to their baby girl and she grew up to be a beautiful young woman. She was called Ho’ohokukalani, which translates as the heavenly one who made the stars.

Wakea desired his daughter and he was afraid of Papahanaumoku, so he arranged for a priest to take his wife away. Ho’ohokukalani and Wakea came together and conceived a child, but the baby was a stillborn son. The baby’s name was Haloa. Where Haloa was buried, a plant grew with heart-shaped leaves and it was called kalo. Wakea and Ho’ohokukalani then gave birth to another son and he was also named Haloa — the Hawaiian people descended from him. Papahanaumoku is respected and known as the mother of the Hawaiian people. In Hawaii, they understand the reason that kalo grows in other parts of the world is that they are related to the rest of the world.

The part of the plant that can be eaten is the corm and the leaves, both of which must be cooked. People who eat taro as a staple part of their diet instead of consuming grains have strong, healthy, white teeth. It also has antiseptic properties in it that clean the mouth and it contains nutrients that improve vision. It also heals the stomach.

Eating taro in a meal makes you feel full and this is good for those wanting to lose weight. Eating it in a balanced diet can lower blood sugar levels and blood pressure and it can benefit the skin, muscles, and nerves. It has a lot of nutritional value — the corms have vitamin A, C, E, and B6 along with magnesium, manganese, folate, zinc, iron, copper, phosphorous, potassium, fiber, carbohydrates, antioxidants, and a small amount of protein. All the beneficial nutrients that make up the taro give it the ability, when eaten regularly, to ward off sickness, such as digestion problems, stop cancer from forming, and strengthen the immune system. it is a food that can maintain a healthy body.

The corm root contains calcium oxalates in needle-like crystals and the leaves and stem have poisons in them as well. Fortunately, the nasty elements are easily cooked out using the many methods to create amazing dishes by steaming, boiling, frying, and baking. Incorporate taro into a snack, main meal, or as a dessert. There are many recipes: Taro Chips, Dim Sum-Style Taro Cake, add taro to your fried rice, sweet biscuits, or cakes. It can also be used in cooking instead of potatoes.

Poi is a Hawaiian recipe and the traditional way to make it is by cooking the taro in the fire outside and after it’s cooked, the skin and bumps are peeled off, it is then grounded while adding water and this makes a paste. Poi is used in a meal to make you feel full and it is also used as baby food. When the Poi paste is made, it will not go off. Instead, it will ferment and many people prefer the aged Poi flavor. The leaves of the plant can also be cooked and are added to make a Hawaiian dish called Luau Stew.

Powdered taro can be bought to make Bubble Tea and it can also be used to make taro milk tea. In Western societies, it can be bought at Asian grocery shops as it is used in traditional Chinese recipes for making mooncakes for the Mid-Autumn Festival. A favorite Chinese dessert is a guilt-free healthy pudding that consists of taro, sago, and coconut milk.

50 g bag of sago or tapioca

Chop taro into pieces and steam.

Gently mash 100 g of the taro to release the aroma.

Boil the sago in the water, use medium to low heat, and cook until the sago is transparent.

Soak sago for 10 minutes to make it chewy.

Pour in coconut milk and add water to a pot.

Add sugar and salt, bring to a boil, and add the crushed taro.

Mix a ladle of coconut milk with the sago before pouring into the pot.

Add the remaining diced taro and bring to a boil.

Check that it is sweet enough.