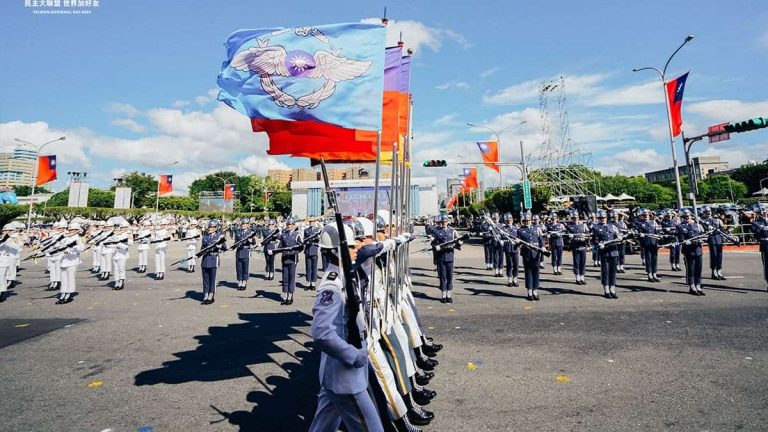 Taiwan Celebrates its National Day in front of the Presidential Office Building in Taipei on Oct. 10, 2021. (Image: via @rocbirthday)

Taiwan celebrated its 110th Double Tenth National Day in Taipei on October 10, 2021, amid China’s recent escalation of military coercion and verbal intimidation. Besides President Tsai Ing-wen’s National Day address, a grand parade and an array of performances were conducted at the plaza in front of the Presidential Office Building in central Taipei.

Double Tenth National Day is the event to commemorate the start of the Wuchang Uprising (known as the Xinhai Revolution) in China’s Hubei Province on the 10th day of the 10th month in 1911.

With the theme of “Broadening Democratic Alliances and Making International Friendships,” President Tsai Ing-wen reiterated Taiwan’s determination to defend the country’s sovereignty and democracy and stressed that Taiwan will not be forced to take the path China has laid out for the country.

“We will continue to bolster our national defense and demonstrate our determination to defend ourselves.

“Taiwan is willing to do its part to contribute to the peaceful development of the region,” the president continued. “Our position on cross-strait relations remains the same: neither our goodwill nor our commitments will change.”

Tsai also called for the maintenance of the political status quo in her National Day address. She noted: “We will do our utmost to prevent the status quo from being unilaterally altered.”

“I also want to emphasize that resolving cross-strait differences requires the two sides of the strait to engage in dialogue on the basis of parity,” she further said.

Faced with the Chinese Communist regime’s persistent attempts to downgrade and marginalize Taiwan, Tsai laid out four commitments to leaders of Taiwan’s three main opposition parties, who were present at the national day ceremony.

Tsai also expressed her appreciation to Japan, the United States, Lithuania, Slovakia, the Czech Republic, and Poland for donating COVID-19 vaccines to Taiwan.

Apart from a series of performances by a military honor guard and marching band, there are also programs performed by street dancers, gymnasts, and taekwondo athletes.

In the parade, Taiwan also showcased its military strength, including the display of 48 aircraft with 12 types flying over the Presidential Office Building, and four new types of missiles mounted on trucks, including a land-based version of the Tien Chien II (Sky Sword II) surface-to-air missile.

Another highlight of the parade was a Chinook helicopter towing the largest-ever ROC national flag ever (18m wide, 12m long, and weighing 45 kg) in a flyover.

The National Day fireworks show was held in Southern Taiwan’s Kaohsiung City in the evening. The show featured a total of 20,000 fireworks launched over 30 minutes, which is a record-high number. With seven launch locations stretching over 3 kilometers (1.8 miles), the show encompassed the largest display area ever.