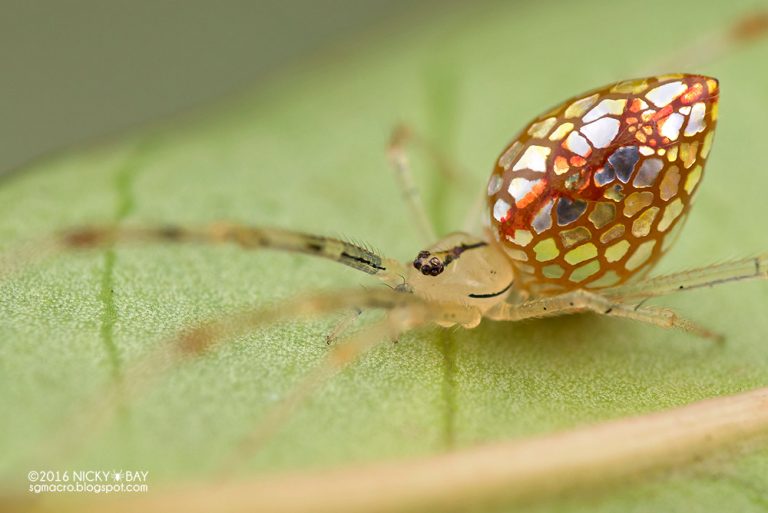 The macro images of mirror spiders shot by a photographer named Nicky Bay have received rave reviews online. For a majority of people, the mention of spiders conjures up visuals of a fearsome and ugly-looking insect, known for making webs. It is true that some spiders are not visually appealing and in fact, look deadly. Some species are known for their venomous bites as well. However, there also exist some variants of spiders that look enticing, especially when captured in lenses in the right way. One such example is the dazzling mirror spider, found mostly in Singapore.

Nicky Bay is a photographer who likes to shoot macro images of insects, including spiders, and his work has brought him a lot of acclaim. The Singapore-based photographer has captured pictures of the unique arthropod with a body resembling silvery, mosaic-like panels. The mirror spider photos he took reveal that even insects can look dazzling when they are photographed in the proper way. The body of the spider is like a silvery reflective surface and it is hard to take your eyes off it.

Bay has a blog post dedicated to these spiders. He also shoots images of other fascinating bugs and shares them on the platform Flickr.

Mr. Bay got into macro photography back in 2008, when he was in his late 30s. Soon, he found out spiders are well suited for macro photography. He has conducted a number of photography workshops in faraway places like Borneo and Belize. He says that a majority of nature-loving photographers focus on large-sized animals and birds. Insects are often overlooked. Bay has developed networks with local arachnologists so that he can learn more about these tiny but fascinating insects and capture them through his lens.

The mirror spider images uploaded in his blogs were mostly shot in Singapore. However, he also went to the Amazon rainforest in Peru a few years back where he was able to shoot these insects up close. Bay writes in his blogs: “The ‘silver-plates’ on the abdomen seem to shrink when the spider is agitated, revealing the actual abdomen. At rest, the silver plates expand and the spaces between the plates close up to become an almost uniform reflective surface.” The changing mirror pattern made him intrigued, he said.

He said in an interview with AsiaOne that these mirror spiders are found in abundance in Singapore. “I’ve seen them in several places around Singapore, including Zhenghua Park and even along the Ulu Sembawang Park Connector. It would also be of little surprise to see them in any other nature park in Singapore.” He has shot the spider species from multiple angles. Mr. Bay is not a trained biologist, but his work on insects has been well-received, finding a place on the website of National Geographic and being displayed by the National University of Singapore.

While Singapore is an urbanized city-state, it also has a lot of greenery and its biodiversity is not well known. The efforts of nature enthusiasts and wildlife lovers like Nicky Bay, however, can change that.

Mr. Bay is not limiting himself to snapping images of the spiders in Singapore. He is gearing up to publish a book on various spider species found in Southeast Asia. He is collaborating with an arachnologist from Thailand for that. However, it is not known when the book is going to be published.